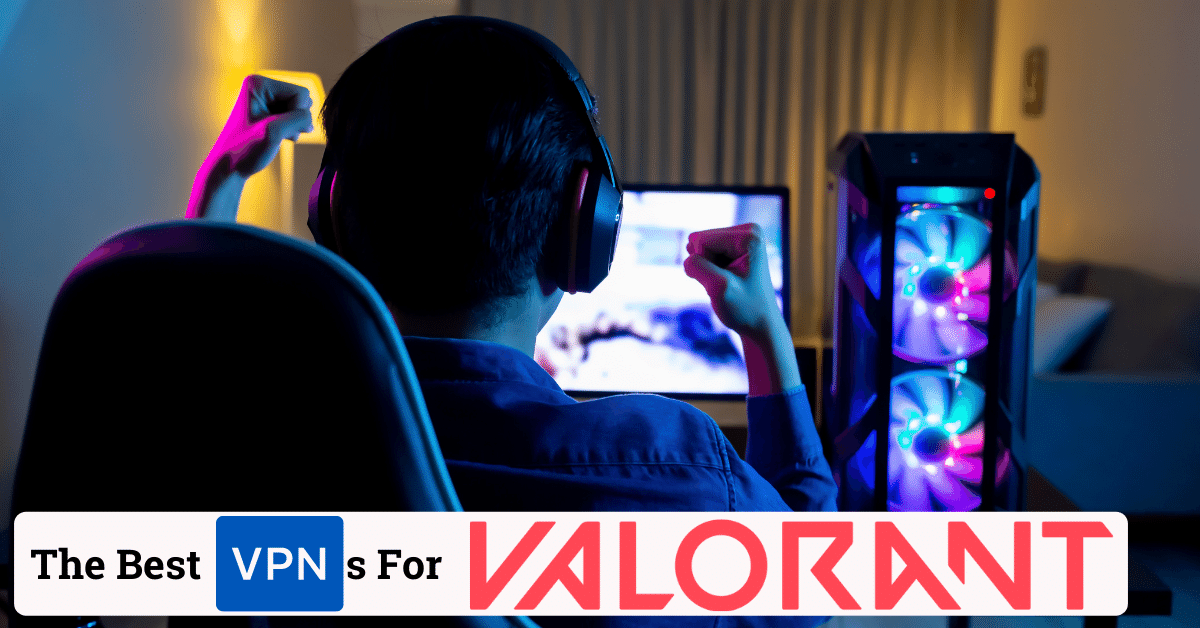 FPS games like Valorant are super-exciting and quickly get the adrenaline flowing! However, when we experience lag, high latency, or disconnects, it quickly becomes frustrating because it affects our chances of winning a match. VPNs can help overcome this, so let’s look at the 8 best VPNs for Valorant.

The 8 best VPNs for Valorant are:

Before you run to plant the spike, take a moment to continue reading so that you can do it in style, with the lowest ping possible!

Private Internet Access (PIA), developed by Kape Technologies, is a top-rated VPN for gaming, including Valorant. It has about 29,200 servers from 77 different countries. Because PIA has native support for port forwarding, you can use it to host gaming servers for you and your friends without adjusting your network settings.

OpenVPN, WireGuard, Shadowsocks, SOCKS5, and split tunneling are all supported by PIA. You may pick between static and dynamic I.P. addresses, as well as a variety of other complex options.

This service will not only allow you to unblock Valorant, but it will also provide you access to Netflix in the United States. You can see why PIA is an attractive choice for playing Valorant because of its quick speeds.

The MACE ad-blocking function, which lets you browse the web without being interrupted by advertisements, is also a neat little feature! It also offers live chat assistance, and I found their representatives to be knowledgeable and helpful.

PIA also offers powerful applications for all platforms, which provide more security and privacy features than almost any other VPN. It also allows users to set their encryption settings (which can allow you to get even better speeds for playing Valorant).

With live chat support and a 30-day money-back guarantee, this VPN is a great choice.

ExpressVPN is a fast VPN that you can rely on to decrease excessive ping in Valorant. It has around 3,000 servers spread over 94 countries. In Valorant, you may use ExpressVPN to alleviate network congestion and lower ping.

It’s also one of the fastest VPNs for streaming, making it excellent for Netflix and comparable services. As some of my friends do, their server network will also allow you to locate mates in a foreign language (or locals from home if you happen to be residing abroad).

Its network of high-speed servers ensures that you will not be interrupted while playing. It connected to 8 places worldwide during testing and averaged 55 Mbps, which was more than adequate for enjoying lag-free gaming.

Split tunneling allows you to connect to both local and remote servers at the same time. It’s particularly ideal for gaming since you can set up a server only for Valorant and operate the rest of your online activities from your local machine.

In the case of a DDoS attack, unlimited server switching allows you to shift sites instantly. ExpressVPN protects your gaming activities with military-grade 256-bit AES encryption, DNS leak prevention, and an automated kill switch. It also hides your I.P. address, providing an extra layer of security against cyber-attacks.

The Speed Test is yet another useful function of this VPN program. It’s compatible with desktop computers. It’s a rapid scan that will show you server locations ordered by speed index, latency, and download speed.

The monthly membership is not the cheapest option, so if you’re serious about using a VPN for gaming, we recommend getting a longer-term subscription because it’s far less expensive if you know you’ll be using it for a long time.

Because NordVPN offers super-fast servers in 59 countries, including servers where you need them to play Valorant, it’s excellent for playing Valorant online. Plus, NordVPN comes with a slew of industry-leading security features that make it an excellent choice for just about everyone.

Furthermore, it is an easy-to-use and reliable VPN with a live chat service available 24 hours a day, comprehensive setup tutorials, and affordable subscription levels. It’s well worth putting to the test with its 30-day money-back promise.

This function protects your privacy and prevents your ISP from blocking your connection because it won’t be able to identify you.

NordVPN is compatible with all of your devices. When it comes to the number of devices you may connect, there are no limitations. You may only use it for up to 6 people at a time, though.

Surfshark is a low-cost VPN that you may use if you don’t want to spend a lot of money on internet protection and privacy. It has more than 1,700 servers for Valorant, in 63 countries.

Surfshark provides servers in over 63 locations, and they are lightning-fast for playing Valorant, broadcasting, and making VoIP calls in-game or on TeamSpeak. Surfshark is extremely adaptable since it unblocks many popular streaming services worldwide, including Netflix U.S., BBC iPlayer, and Amazon Prime.

In addition, WireGuard, OpenVPN, Shadowsocks, individual DNS servers, split-tunneling mode, and a kill switch are all supported by Surfshark. It’s an excellent VPN for Valorant to use to stop stuttering.

Split tunneling is also available with this VPN app. It allows you to set up a dedicated connection for Valorant while keeping the rest of your activity on your primary server, considerably reducing latency.

It also has a kill button, obfuscation, and OpenVPN encryption, making it highly safe. It also features a live chat feature. A fantastic VPN at an unbelievable low price! It’s well worth putting to the test with its 30-day money-back promise.

It is unquestionably one of the finest VPNs for Valorant and gaming in general, providing a fantastic mix of decreased ping compared to non-VPN’d connections. Furthermore, the very modest slowdown in overall download rates is beneficial when a new patch is required!

It’s a tiny bit more demanding on uploads than NordVPN, which ranks a little higher, but not by enough to spoil anyone’s day. If you’re a streamer, you’ll want to prioritize upload speed, making NordVPN the best choice. However, as a gamer, you’d undoubtedly like to have unlimited bandwidth at all times.

Kape Technologies also runs the CyberGhost VPN service. Because you can use a free trial on Windows, it’s one of the best free VPNs for Valorant. It has over 6,500 VPN servers in 89 different countries.

Cyberghost is a fantastic gaming VPN that gives all users lightning-fast connection speeds, making lagging and rubberbanding a thing of the past. You can connect seven devices simultaneously, so whether you’re gaming on your smartphone, PC, Mac, or tablet, you’ll have a gaming VPN ready to go.

Because of its high-speed servers, this VPN service can instantly fix in-game latency. In addition, it helps protect your router from hackers and DDoS assaults.

Cyberghost is simple to install on the most common gaming consoles, and you may accomplish this by sharing your internet connection with your P.C. or Mac. However, it alters your area and does not encrypt your data; you can also use a router that can connect to a VPN.

Cyberghost even sells routers with the software pre-installed (through FlashRouters). You’ll receive all of the security benefits without having to configure the VPN this way manually.

End-to-end AES 256-bit encryption is used in this VPN. You may be confident that no third parties will have access to your browser history or personal information. Without your consent, no one may access your information.

It also includes capabilities to protect against DNS leakage. Cyberghost uses its DNS service and does not keep track of your data. Cyberghost offers a vast coverage area, allowing it to provide a secure connection without sacrificing speed. To play Valorant, connect to the best server and enjoy a lag-free experience.

Hotspot Shield also offers an entirely free service in addition to its premium version. To use it, you won’t need to submit any payment information or even register. The unique Catapult Hydra protocol from Hotspot Shield ensures speed and security while also being fast enough for gaming without latency.

You get unrestricted access to over 1,800 servers across the world, allowing you to connect to any of Hotspot Shield’s lightning-fast servers whenever you want to play Valorant, no matter where you are. Additionally, you may connect up to five of your own devices to ensure that you are secured across the board with no downtime!

It minimizes latency by rerouting traffic to less crowded networks and shifting your virtual location closer to the server, resulting in a reduced ping.

IPVanish, unlike most other services, manages its network and infrastructure, which means there are fewer cogs in the chain, and your anonymity is almost assured.

As a Valorant player, you’ll like its ability to select servers by ping, ensuring that you get the quickest connections possible while actively seeking for one can improve ping in some games.

IPVanish considered one of the best VPN for gaming, preserves your online anonymity while providing the fastest connections available. It gives you complete control over your I.P. address, as well as safe access to banned apps and websites while encrypting your personal information.

Furthermore, it does not throttle your bandwidth, so you can play for as long as you want without worrying about slowing down your connection!

It’s also the only provider on this list that allows unlimited simultaneous connections, following in the footsteps of Surfshark. IPVanish gives new users 250GB of SugarSync encrypted storage as a bonus, and if you’re not happy, you can obtain a full refund with the 30-day money-back guarantee.

There is no free trial, and payment is made in advance; however, you may cancel at any moment within the first 30 days and get a refund. Payments and refunds are made in U.S. dollars; thus, you may be charged a conversion fee if you use another currency.

IPVanish passes I.P. and DNS leak testing, ensuring that no traces of your identity or location are left behind as you surf.

Windscribe’s network spans 60 countries, but if you’re a free user, you’ll only be able to access 10 of them. The U.S., the United Kingdom, Hong Kong, France, the Netherlands, and Germany are among these nations; therefore, you should access most major gaming servers.

For a free VPN, Windscribe is a secure and solid pick for playing Valorant. The service includes a built-in ad and malware blocker in addition to military-grade encryption, and they offer reduced latencies pings that allow you to game the way you want. P2P-friendly servers and split-tunneling are also available for free users.

It uses AES 256-bit encryption, ensuring that your data is nearly unreadable. A SHA512 algorithm and a 4096-bit RSA key add to the security. It converts your data into a random string of characters that only your device can understand.

During busy hours, the free Windscribe servers might be sluggish. You may be limited in your ability to play without latency. In this case, it may be worth it to upgrade to a premium subscription, which comes with a 3-day money-back guarantee, to enjoy unrestricted access to Windscribe.

A reliable VPN service may enhance your ping results in-game and keep you safe and secure behind the scenes.