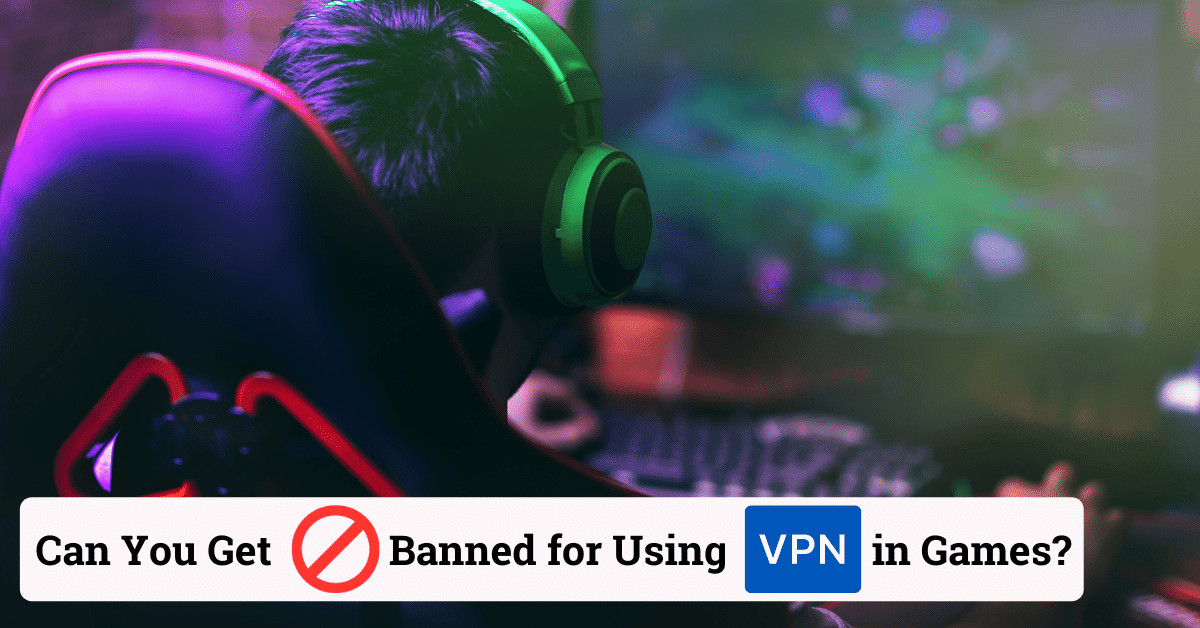 Playing games can be more fun if you have a dependable and quick connection to online gaming servers. If you’re having trouble with lag, dropouts, or latency when online gaming, it’s a good idea to look into software alternatives. However, can you get banned for using a VPN in games?

Using a VPN in-game is a bannable offense if it offers you the advantage of using multiple accounts; cheaper regional pricing helps you circumvent cheating systems or previous bans or violates regional license agreements. Review your game’s Terms of Service to see what they tolerate.

Despite the benefits of a VPN, as gamers, we are more concerned with losing our hard-earned progress and skins on our account, so we don’t want to get banned! Get some peace of mind and find below what you can and can’t do with a VPN.

Can You Get Banned For Using VPN in Games?

Although using a VPN indeed has its gaming advantages, it would be wise to cover yourself so that you don’t run the risk of losing your gaming account. Check the terms and conditions of the game you’re playing before utilizing a VPN while gaming.

Some online games prohibit VPNs, and if you use one, you may be blacklisted. It is especially true in games where using a VPN might offer you an unfair edge, such as the ability to operate many accounts simultaneously.

For example, in Valve’s Terms of Service, they state you are prohibited from using a VPN to bypass geographical barriers or circumvent regional pricing.

“You agree not to use IP proxying or other means to hide your location, whether to avoid geographical limits on game content, to purchase at prices that are not relevant to your location, or for any other reason. If you do this, Valve has the right to suspend or delete your account.”

Geographical barriers or IP Bans have been instituted for two reasons: regional licenses and to prevent regional prices from being abused. If game servers are only meant to be played in Singapore, and someone whose country has a much stronger foreign currency can access the server, they will have a massive advantage.

It’s especially true in free-to-play games where cash shops are typical. They can purchase a lot more in-game power than any local playerbase. Furthermore, this can create a power struggle between players on the server, resulting in a Player vs. Player-focused game becoming a pay-to-win game.

Other Reasons for Bans Using a VPN While Gaming

VPNs are entirely acceptable for Riot Games, home to League of Legends and Valorant. Riot Games have been dedicated to making their users (us, the players) as secure as possible lately. They’ve introduced free account name and password changes and email confirmations.

And you must confirm that you’re the account owner by identifying yourself to Riot. In the case of Riot and similar gaming companies, using a VPN could get you banned indirectly, albeit temporarily.

When you’re playing League of Legends with VPN, it constantly changes your IP address – the same IP address that Riot Games identify you in their data. So when you log in from an entirely new location with the same account, Riot detects that as a possible hacking/selling/sharing that account.

If you log into your account three or four times in one day, each time using a different IP address, the chances are that Riot will notice that. And they might be forced to put a stop to that account because, to them, it seems sketchy.

The main reason banning would occur is to prevent people from cheating the in-game systems and getting around bans previously issued. For this reason, you must review the game’s Terms of Service before attempting to use a VPN to play.

What Are Some Consequences of Gaming With a VPN?

In most cases, gaming with a VPN is perfectly acceptable, and it won’t get you banned. There are a few things; however, you may want to keep in mind, especially if a VPN is causing you to appear as a cheater.

Most VPNs change your IP frequently during connection. When an account shows that it has logins from multiple IP addresses, it usually means it has been compromised (i.e., hacked, or someone shared their account password and information).

From the server’s standpoint, this is very suspicious behavior, and it may suspect you of cheating, even if you are not. If someone else uses your IP and cheats, you’ll be placed in a “suspect cheater” pool, and game matching will be extremely slow. It’s unclear how you’ll get out, but after a few games, you’ll be able to do so.

Do Pro Gamers Ever Use VPNs When Gaming?

One of the finest instances of the rising number of uses for Virtual Private Networks is the rapidly developing eSports business (VPNs). The massive tournament prize pools available to the world’s greatest video gamers necessitate the highest levels of security and connectivity speeds.

That’s why The world’s top eSports tournaments use VPNs to protect against distributed denial of service (DDoS) attacks, which may overload a gamer’s internet connection and cause it to grind to a halt.

In 2015, one of the most high-profile DDoS attacks on a significant eSports championship occurred. The International Dota 2 Championships were disrupted entirely, with a DDoS assault halting the competition for more than an hour before participants could reconnect.

A VPN can be a valuable tool to improve your connection to online game servers and protect your privacy. Check the terms and conditions of the games you play before using a VPN, as some game providers disallow their use.