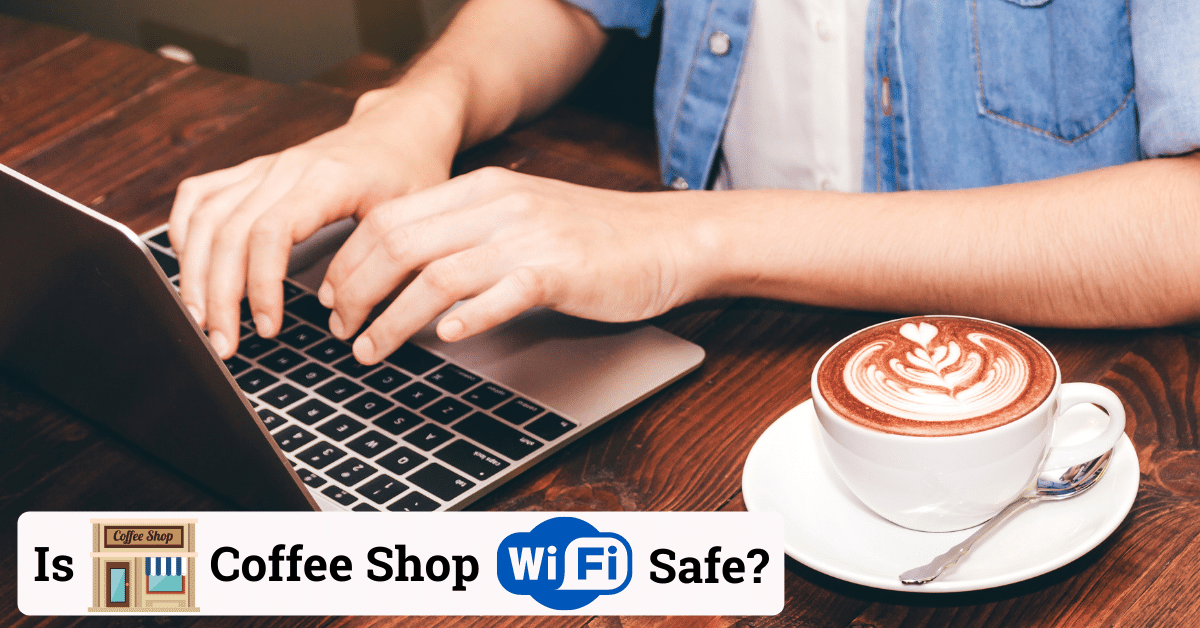 Coffee shops are some of the most convenient places to get a fast WiFi connection while you’re enjoying your cup of coffee or a meal. No wonder thousands of people every day essentially work from coffee shops like Starbucks. But is coffee shop WiFi safe?

Like other public WiFis, coffee shop WiFi isn’t safe, and its continued use can potentially get you in a world of trouble. A coffee shop’s public WiFi is the most dangerous place to connect to a public network.

Continue reading why exactly it isn’t safe to use your local Starbucks WiFi without protection and 10 tips on how to safely work from coffee shops.

According to an iPass, cafes and coffee shops were at the top of venus where most mobile workers have been hacked or had a mobile security issue. Hotels were at a close second place as well.

Cafes are simply put, a popular place where people like to connect to WiFi as soon as they sit down without thinking twice what they’re connecting to. The sheer number of people using cafe WiFi is staggering and hackers flock to take advantage of it.

Besides being extremely popular as a place of work or pleasure, coffee shops also have notoriously poor network protection.

Hackers and other cybercriminals can easily intercept public WiFi networks, create their own hotspots with the name of the coffee shop, use network scanners to find vulnerabilities and easily connect to devices, etc.

A survey reported that a staggering 55% of WiFi users would readily share data, exchange information, or basically do whatever it takes to get free WiFi with a strong signal.

That’s millions, if not billions of people, that are in jeopardy of losing their sensitive information to hackers, scammers, and all sorts of other cybercriminals.

Another survey revealed that 45% of employed adults in the US believed that the public WiFi network of a public location like a local coffee shop would keep their information safe. In stark contrast, only 13% of Japan’s working adults believed the same thing.

The reality is that not only is it not safe, but it’s outright dangerous connecting to public WiFi.

Now that we know why we aren’t safe when using a coffee shop, or any other public WiFi or hotspot, let’s see what steps we can take to mitigate the risks.

10 Tips For Working From A Coffee Shop

Easier said than done, but by simply not accessing public WiFi, for instance in a coffee shop, your chances of getting hacked, getting your identity stolen, or compromising your work data is much lower.

Over 81% of organizations surveyed said that they had seen WiFi-related security incidents, with coffee shops leading the venues where such events had occurred the most. If that isn’t enticing to stay off public WiFi, we don’t know what is.

I get it. Offices are slowly being fazed off, homes can be cramped and loud, and being around other people is still a good thing, even in the new normal.

However, there are some solutions to using public WiFi safely.

Mobile data, especially on 4G and 5G can be an excellent substitution for public WiFi. You can easily make a hotspot with your smartphone and connect your laptop if needed.

With unlimited data plans at competitive rates, there’s essentially no need to use dodgy public WiFi in a cafe, restaurant, hotel, or airport.

VPN is an inexpensive way to encrypt your data and stay safe while still being connected to the cafe WiFi. To illustrate how cheap VPNs are, know that you can pay less than the price of a cup of coffee a month for a VPN.

Yes, a multi-year contract will cost you around $2-4 per MONTH with most major VPN providers that have all the bells and whistles that you didn’t even know you needed.

Incidentally, one of the best VPNs out there is also one of the cheapest ones, clocking in at under $3. For that price, you get a native app for all your devices, malware and phishing protection, ads and trackers go away, and no one will know that you’re even using a VPN if you use the Camouflage mode.

Your personal data will stay secure and private with industry-leading encryption that shields your every online activity.

The company also offers a 30-day money-back guarantee on all their plans so you can cancel the membership if you aren’t satisfied or you don’t think you need a VPN.

Although handy, automatic file-sharing can be unsafe on your phone or laptop. Even Apple’s AirDrop isn’t safe as people thought it was and hackers can easily access user data.

Even though the company was warned about the problem three years ago, nothing was done to fix the issue.

5. Make sure the hotspot actually belongs to the cafe

What criminals often do is, they set up their own public WiFi that bears the name of the cafe, restaurant, airport, or other institution. If you aren’t diligent and you don’t check with the staff or owners if that is indeed their hotspot, you may be connecting to hackers’ WiFi.

By logging into the hackers’ free WiFi that is mimicking the establishment’s network, the criminals can see everything you’re doing online, including your credit card information, passwords, or whatever else you’re Googling or browsing.

If you’re on public WiFi and you aren’t using a VPN, you should NEVER log in or send credentials to websites. If you need to log in to an account, only do so on encrypted websites whose URL starts with https.

Even then, it isn’t perfectly safe. A better option is to use your mobile data to enter private information, sensitive data, or login credentials such as usernames and passwords.

Mobile data is much more secure than public WiFi.

7. Check your firewall and anti-malware software

Firewalls are usually turned on by default on computers, while mobile phones don’t typically have them. Nevertheless, you should check if a firewall is enabled on your computer and even install a reliable third-party firewall for your phone.

The same can be said for anti-virus and anti-malware software on both computers and phones.

Many VPNs come with a firewall and anti-malware or anti-virus features out-of-the-box. Not to mention that they encrypt your data and block ads and botnets.

Same as with auto file sharing, the automatic WiFi connections feature can be very handy. However, by connecting automatically to WiFis without your permission, you don’t have any control over these connections and are putting your data in jeopardy.

By turning this feature off, you’re one step closer to staying safe while browsing the internet. On the other hand, VPNs have the feature to auto-connect to VPN whenever you connect to WiFi.

That way, even if you don’t remember to turn on the VPN, it will do so for you to protect yourself from unwanted snoopers and hackers.

Not using the same password on multiple websites is easier said than done. Luckily, there are many apps that will save all your random passwords in a vault while you only have to remember one – the master password.

Google also lets you autosave all your passwords across devices and always suggests a strong one when you’re registering for a new account somewhere.

If you have one password across the internet, a criminal can potentially access all your accounts by only getting ahold of one.

Internet browsers and operating systems will regularly inform you that you’re trying to access a malicious website or trying to download a suspicious app. Don’t simply dismiss these alerts and think hard if it’s really necessary to enter or download the item.

What Data Is At Risk When Using Coffee Shop WiFi?

Unprotected WiFis, or those protected by a weak password, are a treasure trove for hackers that get the opportunity to access the devices connected to such unsecured networks.

A hacker can easily position itself as a man in the middle. That’s why these attacks are literally called Man-in-the-middle attacks. They are sort of a concealed bridge (or a troll under the bridge) that listens to all the data that goes between you and the cafe WiFi.

By positioning themselves in this way, hackers can see EVERYTHING you’re transmitting online. That includes any emails that you’re sending or receiving, all credit card and billing information that you’re using to purchase something while connected to the WiFi, as well as your home or business address.

They can also access your personal files like photos and videos and your banking credentials if you’re connecting to a banking app while on a public network.

If the hackers want, they can also redirect you to their website, which mimics a real site. If you enter your password there, they will see it. Another thing that they do is install malware that can provide backdoor access to all your files on a computer.

To conclude, coffee shop WiFi is one of the least safe places to connect your phone or computer. Hackers target them because of their popularity and a shocking lack of security or encryption.

Your data is like an open buffet for criminals if you don’t take precautions such as using a VPN before connecting to a public WiFi, only using mobile data, or other tips on our list for working from coffee shops.