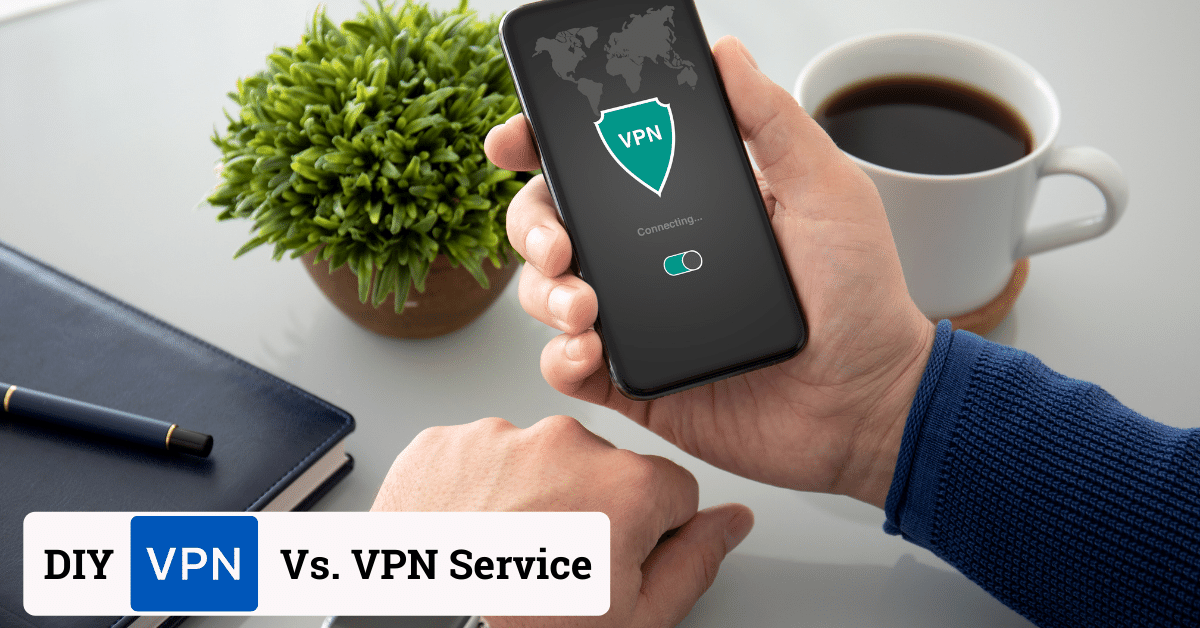 Are you sick of paying for a VPN? Are they simply too easy to use, and you want to tinker with something? Or perhaps, you think you could do better than VPN providers?

You’re not alone. A lot of people prefer to make their own VPNs at their homes or offices. A DIY is an alternative to buying an out-of-the-box solution. But just how good of an alternative is it? Let’s find out together. Here’s a TL;DR.

A DIY VPN is good if you want to have control over your privacy and aren’t okay with giving your data to a VPN provider. A VPN service is a turn-key solution that’s easy to use and will be able to unblock streaming websites, and is much safer for torrenting, unlike a DIY VPN.

Most people hear a siren’s call of “do it yourself” at one point or another. And IT folks are especially prone to that. Getting a chance to make something from scratch is alluring.

What’s more badass than setting up your own VPN? Frankly, a lot of things. But for the geeks among us, almost nothing.

Rolling your own VPN is a great chance to flex your brain muscles and see what they’re made of. Not to mention that you can allow your friends to connect to your home network with access through the VPN server.

If you like to have the steering wheel in your hands and don’t want to hand your privacy into someone else’s hands, setting up your own VPN can be beneficial and fulfilling.

The downside is, you don’t have anyone else to blame if something goes awry. As YOU were the one that set everything up, you can only point the finger at the mirror.

It all depends on how capable the VPN provider is and how remote the servers are from your true location, plus a host of other factors.

The main thing with a do-it-yourself VPN is that the traffic doesn’t go through remote servers that could be on the other side of the world (if you want). And that makes the connection as fast as it ever was. This brings us to the first disadvantage of DIY VPNs.

Paying for a VPN service means that you can tap into thousands of servers with some providers. They literally have them all over the globe.

With a DIY VPN, you’re stuck in just one location, unfortunately.  This means that you can’t connect to a server in a different country and unblock international websites and services — no more streaming Netflix from other countries.

This might be the biggest drawback for people living outside of the US as they won’t be able to tap into exclusive content, websites, and streaming libraries from America.

Having your or your server IP address exposed is not ideal. Yes, it doesn’t necessarily have to be bad news, but it can be. But more on that below.

Setting up a VPN can require a certain level of know-how. Although there are multiple ways of rolling your VPN, some are more demanding, while others are more straightforward to implement.

However, small mistakes could cost you and could impede your privacy efforts. Sometimes it’s better to get an out-of-the-box solution. At least for a vast majority of people.

Depending on the route you take for rolling your own VPN, setting it up could mean a lot of work. Maintenance included. There are obviously tutorials online, and we’ll outline some methods below as well.

However, you have to be quite sure what you’re doing and understand most of the things that are involved in DIYing it.

Having a fixed IP can be beneficial in some cases, but it can also greatly reduce your anonymity. Generally, when you connect to a remote VPN server, you’re sharing it with tens, hundreds, or even thousands of other people.

You can understand how that can make it difficult for someone to pinpoint you exactly and try to locate your real location.

With your DIY setup, you have only one IP address that can potentially be connected to your online account on a website. This makes DIY VPN considerably less safe than a VPN service, at least in this regard.

Although you can get a dedicated IP address from a VPN provider (at a cost), a shared IP is the default when connecting to a VPN server. As we just pointed out, it gives you a greater deal of anonymity but can also lead to the “bad neighbor effect.”

However, if you intend to torrent or simply want to hide in the crowd, a shared IP address is the way to go, with all its caveats.

RELATED: Is It Worth To Pay For A VPN? (Free Vs. Paid VPN)

2. The world is your oyster

Having the ability to connect to a remote server in a distant country and accessing websites or services that would otherwise be out of reach for you gives a thrilling feeling. It’s the forbidden fruit.

Not only do streaming services like Netflix actively block people from one country to watch content from another one, but some streaming platforms like Hulu also don’t even let you join if you aren’t in the US.

A VPN service is also better if you’re trying to bypass internet censorship and therefore need to connect to a server in a different country outside your own.

Paying for a VPN subscription means that you can download a dedicated app for any major operating system or device. The apps are slick and easy-to-use and offer many settings that you may or may not change. It’s up to you.

Most VPN providers let you have anywhere from 5 to infinite devices connected at the same time. It’s great if you have a household full of devices or people. You can also set it up on the router level for a blanket, app-free protection.

Setting up a VPN via a VPN provider is as easy as downloading an app for your device and subscribing to a service. For a completely hands-off approach, simply enable auto-connect, and you won’t even have to think about it anymore.

READ ALSO: VPN App Vs. VPN Router (What Will Work Better For You)

I’ve put this under VPN cons as even 3$ per month can be a lot in some parts of the world, and shelling out 50-100 dollars for a multi-year subscription is unimaginable.

However, sharing one account is a viable option as most VPNs support from five to unlimited simultaneous connections.

When there are thousands of VPN providers in an open and largely unregulated market, there’s bound to be a barrel-full of bad apples.

Many VPNs will log your data (even though they say they don’t) and sell it for profit. Free VPNs are the biggest culprit of this as they have to get profit somewhere.

Stick to the trusted VPNs that offer the best value anyway at a very affordable price, especially for multi-year plans.

Main Differences Between Own VPN and VPN Service

Most VPN providers have gone out of their way to make their apps and clients super-easy to use after you download them. There are settings, of course, but they’re well explained right in the app itself.

On the other hand, a DIY VPN setup will grow you some serious chest hair. As every device is different, some of the methods will require an even more hands-on approach.

We already mentioned that when you have a makeshift VPN, you are stuck with one IP address. This won’t help you unblock content and websites from other countries. For people in the US, that might not be of much importance, but for others, it could put them off of DIYing.

A VPN provider offers thousands of servers in tens or hundreds of locations worldwide. Once you get a taste of the choice, you won’t be going back.

We already mentioned this a couple of times, so I’ll only touch on it briefly. Having a VPN isn’t a silver bullet for privacy and anonymity. It does help, for sure, but you also have to have a healthy dose of common sense.

By making your own VPN, you’re putting privacy and security into your own hands. That can be a good or a bad thing. If you’re a professional, or you really know what you’re doing, you should be fine.

Otherwise, maybe opt for a paid VPN service instead.

READ NEXT: Encryption Vs. Hashing (Explained For Beginners)

Similarities Between Own VPN and VPN Service

If there’s one thing that VPNs do well, it’s that they encrypt your data. Even if someone were to hack into your device or your internet connection, the information that they see will be gibberish.

I think that’s really it. It should be fairly easy for you to decide now if you want to go down the DIY route or not. So, if you do, here are some ways you can roll your own virtual private network.

2. How to Easily Setup DIY VPN

Here’s an easy method that Romain Dillet from TechCrunch utilized to get his own VPN up and running in 15 minutes. He suggests the following steps to roll your own VPN:

Algo VPN is basically a set of scripts that help you run a VPN in the cloud in no time, even if you’re not a developer.

If you’re even a little bit tech-savvy, this is an easy way to implement a VPN without going to a VPN provider. Instead of DigitalOcean, you can use another host like AWS, Google Cloud, MS Azure, etc.

If you do use DigitalOcean, you don’t have to create and configure your own server as Algo VPN will do that because it utilizes DigitalOcean’s API to create a server and install everything.

A DIY VPN can be useful in some cases and for some people but if your home connection isn’t great or your upload speed isn’t good enough, it’s not really a viable option to roll your own VPN.

Also, if you go the Algo VPN route, you have to be aware of the fact that DigitalOcean and other hosting companies based in the US will have your billing info and a government institution could get that info about you from the host.

Most major VPN providers are based outside of the US and in countries that don’t have an obligation for companies to give over your data. However, some of the smaller VPN companies do sell your data and earn money off your back, even if you’re paying for a subscription.