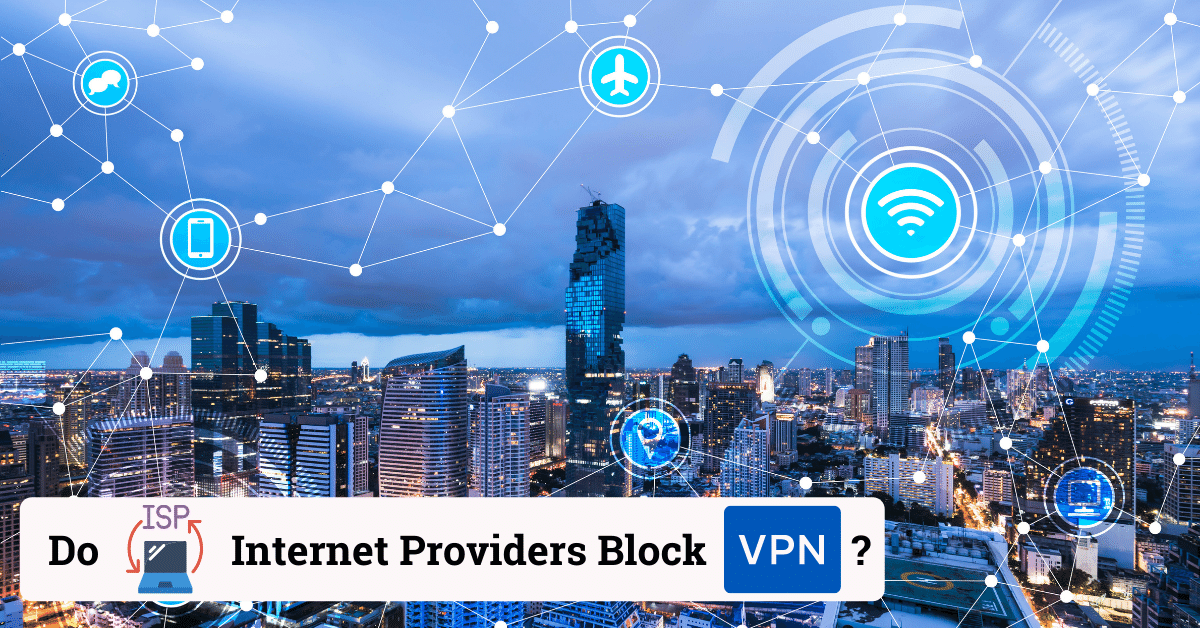 Data is a commodity that is being traded and sold at a rate that most of us are not even aware of. Almost everything we do online can be a lucrative piece of information for someone, including our internet service providers. VPNs are the apparent solution for this, but the question is, do internet providers block VPNs, and if they do, how can we bypass those blocks, if at all?

Some internet providers can and do block VPNs for a variety of reasons, including legal requirements. It is possible to bypass these blocks either by temporarily trying a different internet connection, a different VPN server, or using network obfuscation, which many VPNs offer as a service.

The options you choose to bypass an ISP’s VPN block will depend on the reasons they are blocking your VPN and how they are blocking it since some methods work perfectly for some blocks while being useless against others. Let’s look at the reasons and ways ISPs may use to block your VPN, and then you will understand what you can do to bypass it.

Why Would An Internet Provider Block A VPN?

There are two primary reasons that an ISP may cite to justify blocking your VPN:

VPNs May Be Restricted In Your Country

Many totalitarian governments are opposed to VPNs and may even have passed legislation to ban the use of VPNs in some countries. This is done to limit whistleblowers, allow monitoring of citizens’ traffic, or even enforce censorship by blocking citizens’ access to certain websites or networks.

Most VPNs are designed to perfectly cater to those in such countries. VPNs protect privacy, hide online activity, bypass local restrictions, and filter through censorship. Using a VPN lets you communicate with the outside world with less risk (note, not “no risk”) of being identified.

In such countries, internet providers may well have instructions from the authorities to block any access to VPNs for reasons of “security.” If the ISP does not block a VPN, they will likely come under fire and face being shut down. Totalitarian governments like to control all communications specifically to avoid the kind of communication that a VPN facilitates.

Internet Providers Cannot Sell Your Data With A VPN

Some internet service providers will sell you internet connectivity at a reduced price. The reason why they would do this is simple: you are not their primary customer, but you are their primary product. The ISP will harvest your data like contact details, online habits, browsing history, likes, and dislikes, and either sell that info or use it to show you targeted advertisements. You are the product.

This is even more common in the case of coffee shops, restaurants, or other establishments that offer “free” WiFi. Regardless of how secure their connections supposedly are, most of them are purely there to harvest your data for monetary gain.

This may seem shady, but how many of us can honestly say we read the terms and conditions when signing up for our internet access service? It may be well within their rights to harvest and sell your data. In fact, some countries encourage that. And we’re not even talking about totalitarian governments now; the United States passed laws that allow and encourage these actions.

When you use a VPN, your internet communications are encrypted and often even bypass the ISP’s DNS servers, meaning that they can literally gather no data other than what you give them when you sign up. This limits their income stream. So it’s evident that an ISP like that would do everything in its power to block its users’ VPN access.

How ISPs Block VPNs (And How To Bypass It)

There are four essential ways that an internet provider can use to block VPNs. These methods differ in complexity and effectiveness, with less complex methods generally being less effective, making them easier to bypass.

Some ISPs may attempt to stop VPNs at the source by blocking VPN sign-up pages. This method is only effective if you don’t have a VPN account yet. Bypassing it is often as simple as temporarily switching to another internet connection, like using a mobile hotspot for a few minutes while signing up for the VPN and installing the client software.

Because VPNs are often used to access services illegally, such as another country’s Netflix catalog, there are databases of IP addresses that have been associated with VPN servers. Once your ISP sees your encrypted connection heading for one of these IP addresses, it could block the connection. This block can be bypassed by using another VPN server or obfuscation that we’ll discuss soon.

Most VPN protocols connect using specific ports. OpenVPN, for example, uses port 1194, and L2TP uses port 1702. Both of them are popular VPN protocols, and blocking those ports will block the VPN. Bypassing these blocks can sometimes be as simple as switching your VPN to another protocol or configuring it to use another port. In some cases, obfuscation will also help to bypass this block.

Even though your data is sent in encrypted packets when you’re using a VPN, most encryption protocols leave some kind of footprint in the packets. Your internet provider could use a process known as Deep Packet Inspection (DPI) to detect these footprints and block your connection if they suspect that you’re using a VPN. Obfuscation is the only proper solution for this type of block.

Obfuscation, though often compared with encryption, is an entirely different technology. Instead of replacing all characters in your data with other characters, as encryption does, obfuscation distorts your data to confuse servers and people, making your data appear like something completely different.

Obfuscation is an optional additional function of many modern commercial VPNs. Usually included in the service, it is not turned on by default. Once you switch it on, your data will appear like innocent unencrypted data. The VPN server’s IP address could be obscured, making it look like a regular user’s computer. Port switching could be included so that a blocked port won’t block your VPN access.

Also, because the data is distorted to make it appear different, the encryption protocol’s footprints won’t be distinguishable, thereby effectively hiding the fact that you are using a VPN from your internet provider and avoiding potential blocking in the process.

Depending on your location and your internet connections, your internet provider may very well be blocking VPN access either to keep you in line or to improve their bottom line (or both). Suppose you are in either of these scenarios. In that case, it may be worth your while to invest in getting a VPN that offers proper obfuscation, has multiple protocol options, and has as many servers as possible.