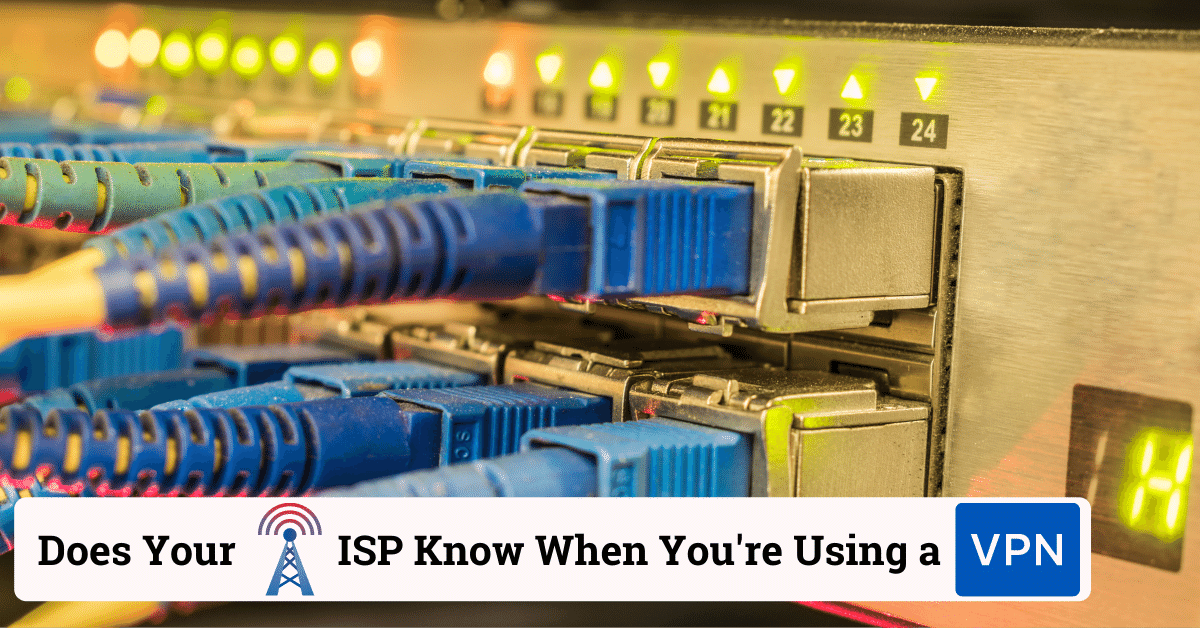 We live in an era where there is a proverbial war for privacy.  While the public is trying to find new ways to defend their privacy, it often feels that corporations are creatively finding ways to sell it.  So, VPNs have seen massive gains in popularity, but there is still the question:  Can my ISP see that I’m using a VPN? Do they even care?

ISP can see if you are using a VPN.  A VPN encrypts all your data. While ISP cannot decrypt any of the data, they will be able to see user’s IP address has changed or web activity has passed through the IP address of the VPN server.

If your ISP knows what to look for and where to look for it, they will be able to see you are using a VPN, but whether that should concern you depends mainly on what you are doing and where you live.

The Relationship Between A VPN And Your ISP

Because your ISP grants you access to the internet, they can also see a fair amount of what you are doing online.  For example, they will know that your IP address is connected to Facebook once an hour for 10min at a time.

If you are surfing sites with low encryption, they can put together a frighteningly accurate picture of your online persona based on your browsing activities and habits.  They can then sell this metadata image to advertisers, which is why you probably see ads based on your google recent searches.

What’s worse, your ISP could hand over all this lovely data to the government or have it stolen/leaked in the case of a security breach or successful hack.

A virtual private network, or VPN, has the job of encrypting your data before it passes through your ISP.  After that, the encrypted traffic routes through the IP address of the VPN server and only then to its destination.

When it reaches the destination, it is shown as your VPNs IP address and not yours, hiding your activity from your ISP.

However, that doesn’t mean that your ISP can’t know that you are trying to pull the wool over their eyes. First, they can see that the data passing through the router is encrypted, and then they can see that it is headed to an IP address of a VPN.

There isn’t much more they can see, but the point is that they can know when you are using a VPN.

3 Reasons Your ISP May Care If You Use A VPN

There isn’t a fixed rule whether your ISP is OK with your private VPN practices. Usually, ISPs don’t seem to care too much, but there are certain instances where they may not be entirely on board or even outright against the practice.

1.  Your ISP Will Care If It Is Illegal To Use A VPN

Could using a VPN actually be illegal? Well, in certain countries, yes.  If you are in a country where it is illegal, and your ISP finds you using one, you could land in pretty serious trouble.

There are six countries where the use of a VPN is banned:

There are also three other countries where the use of VPNs is partially banned or tightly regulated by the government:

You can bet that ISPs are keeping close tabs on VPN traffic in any of these countries.  The consequences of getting caught using a VPN vary a good deal.  Depending on the particulars of the infraction and where you committed the crime, you could face severe fines.

Even if you live and use your VPN in a country where it is legal to do so, if your ISP starts to sniff suspicious and illegal activity masquerading underneath that VPN, they will probably begin caring quickly.

2.  Your ISP May Care If You Are Hogging Bandwidth

One of the big reasons you should consider using a VPN is bypassing your ISP’s throttle practices.

Some ISPs throttle sites that consume large amounts of bandwidth, such as streaming or online gaming sites.  In this way, ISPs can better distribute their available bandwidth, or, at least, that’s why they say they throttle us.

Using a VPN means that your ISP cannot see that you are using these services and won’t know to throttle you.  But, somewhat ironically, if you are using enormous bandwidth, you may still get throttled by your ISP, even with the VPN.

In other words, the VPN may hide your activity but not your data consumption.  So your torrenting habits may still be private, but if you are downloading movies for the whole neighborhood, you may find your ISP reducing your speed quite a bit.

3.  Your ISP May Care If They Lose Money

Remember that earlier point about your ISP selling off your metadata at a profit?  Using a VPN is a brilliant way to cut off their supply of valuable data or encrypt it so that it is nearly useless to them.

Sure, the odds are that they won’t bother if just one or two people use VPNs, but if a significant percentage of their customers start using VPNs, it will harm their bottom line.

Many users of many different ISPs have reported a marked drop in speed that can only be the ISP (allegedly) throttling all traffic that passes through a VPN.  In these cases, it is a blatant attempt to discourage the practice.

Check with your ISP if they throttle VPN traffic before you subscribe to one.

Can Your VPN See What You Are Doing Online?

If you are using an effective VPN, there is little to no chance of your live encrypted data being visible or usable.  In other words, your activity should be private and secure.  But, that doesn’t mean that your data is entirely beyond the reach of The Man.

While it is true that you cannot track live encrypted data, several countries have data retention laws that require VPNs to store data for a given period.  This data could include all usage logs which show the websites you visited.

If your VPN operates or is registered in a country with such laws, like the US and EU, it must keep certain data logs.  And with legal motives, such as a warrant, authorities may be given access to this stored data.

It would be best if you chose a VPN that places high value on privacy, but that VPN will still be obliged to obey the country’s laws in which it operates.

If you use a VPN, your encrypted data passes through your ISP and routes to the IP address of the VPN you use.  As a result, your ISP can see that you are using a VPN and for how long you are using it, but they won’t be able to track your activity while you are using it.

While ISPs are not well known to care too much about VPN usage, there are instances where will oppose the practice. For example, if VPNs are illegal in your country, your ISP is likely to report you if you use one.  Furthermore, some ISPs also make money from selling your data, and because VPNs encrypt your data, they may play well with them.