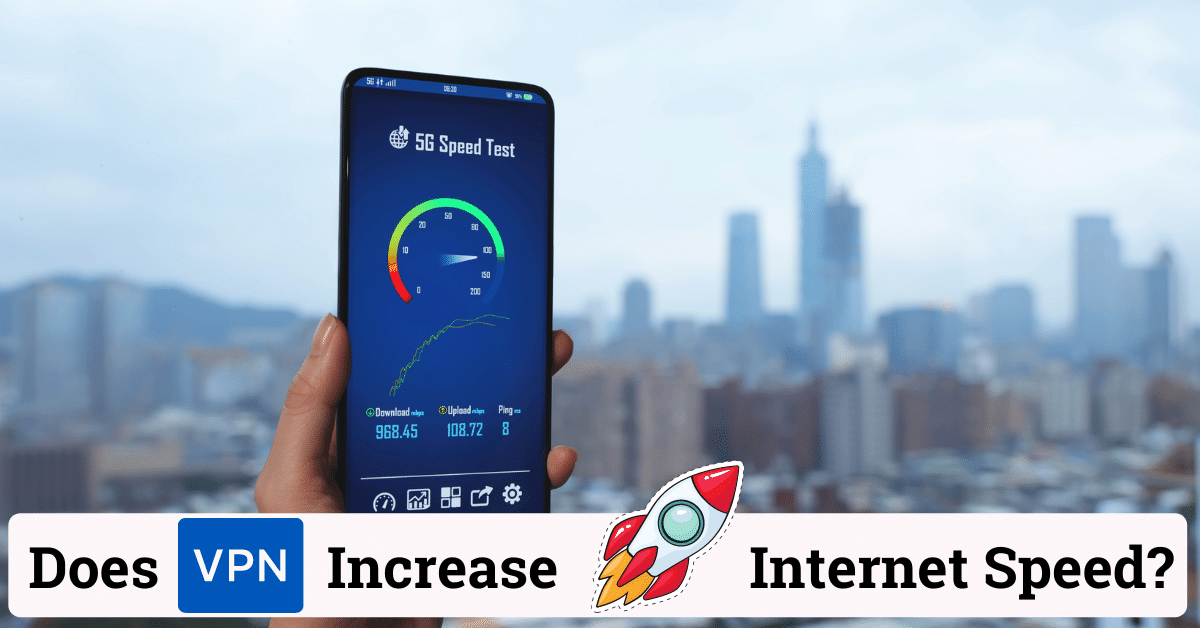 VPN and speed increase don’t usually go hand in hand, but there are cases when a VPN can increase your internet speed.

Read on to find out when and why it can happen, what else can affect your internet speed, and what to do if the VPN slows down your internet connection considerably.

A VPN could increase internet speed if the ISP were throttling a person’s bandwidth before using a VPN. An increase in speed after connecting to a VPN will also happen if the ISP isn’t sending traffic along the most effective route available.

Both increases in internet speed happen because the internet service provider can no longer tell where your traffic is going to and from. That’s because a VPN masks your real IP address as it goes through one of their servers.

Because ISPs can’t see what you’re doing online, they have no reason for throttling your speed. Therefore, you should experience a speed increase when streaming video, playing online video games, and even torrenting.

What is ISP Bandwidth Throttling?

Internet service providers, or ISPs, have been using internet bandwidth throttling for quite some time now. And, you might not even be aware of it.

ISPs usually slow down your internet speed based on data usage, specific apps or websites, as well as torrenting.

If you’re a heavy user of Netflix or Amazon Prime, for example, or you like to download movies and TV shows, your ISP might be slowing you down.

Streaming or downloading 4K content uses up a lot of bandwidth and can strain the network if many people are doing it simultaneously, i.e., in the evening.

Resorting to bandwidth throttling isn’t fair by a longshot as you have already paid for the internet access fair and square. It’s not your problem that the ISP doesn’t want to invest some of that money into upgrading their systems.

Bandwidth throttling is also a way to basically extort money from streaming companies because otherwise, users might choose another streaming service that paid up already and doesn’t have speed issues.

For example, ISPs in South Korea and the UK were asking and even suing Netflix for more money when the mega-popular TV show Squid Game came out. The South Korean ISP claimed that their traffic went up 24 times and that Netflix and their successful TV show were to blame.

That’s an outrageous claim to make as ISPs are in the business of providing broadband internet to people that are willing to pay for it. Their customers obviously want to watch the uber-successful TV show. Is Netflix somehow forcing people to watch it? Hardly.

How to fix Inefficient ISP Routing?

In some cases, turning on a VPN can easily fix inefficient ISP routing and increase the internet speed.

This happens because, again, your ISP doesn’t know where the traffic is coming from and where it’s going, which might change the routes the ISP is sending your traffic to.

It could start sending it along a more efficient route and thus speeding up your internet connection every time you connect through a VPN.

In most cases, VPNs will slightly decrease the speed of your internet connection. That’s because there are numerous steps involved in connecting to the internet through a VPN.

The main culprits in slowing down the internet connection are connecting to a remote server and the encryption process.

What Else Can Affect Internet Speed?

Many factors affect internet speed, especially when combined together. Let’s see what the main ones are. Some factors are directly tied to VPNs, while others concern your ISP, your environment, or the hardware and software you’re using.

This first one concerns VPNs and the number of servers and customers that are connected to said servers. When a VPN doesn’t have enough servers at its disposal, and too many people connect to them, there’s a great chance that users will experience latency and slower internet speeds.

The main culprits here are free VPNs that often have a couple of dozen servers and too many customers that are all connecting to them simultaneously. There are, in fact, many good reasons why you shouldn’t be using a free VPN, and this is certainly one of them.

Data packets have a longer distance to travel than they would if you were connected to a server in your country or one next to it.

If a VPN has a wide choice of servers in many countries worldwide, it will be easier to find a closer or faster server and thus reduce the latency and even increase the internet speed.

Your router or even cable dictate how fast your internet connection will be. If you connect via an ethernet cable, you’ll generally get faster internet speeds than connecting with WiFi.

The WiFi speed also might decrease if it has many devices connected to it. There are, of course, solutions that can mitigate this, but the fewer devices are on a WiFi network, the better.

Then there are computers and even smartphones that might not have enough processing power to cope with what you’re asking them to do and thus slowing down the internet speed as well.

We all know how power-hungry apps can be, but did you know that many of them connect to your WiFi in the background, sucking your battery and slowing down your phone, computer, and internet connection.

It’s a well-known fact that as you move further from the WiFi router, your connecting becomes poorer and starts breaking constantly. It’s one of the most annoying things ever.

WiFi can also get stifled if there are obstacles between the router and the user or device, as well as any metal or water placed in between.

You can place the router in a better place or get signal copiers that carry the WiFi signal further.

Finding a solid internet service provider that offers fast speeds, reliable connections, and reasonable prices can be extremely difficult as many areas have limited choices of ISPs.

It’s no wonder that ISPs think that they’re Gods and often try to put throttle internet speeds, raise prices, or simply not deliver what they promised.

Encryption is the meat in the meat and potatoes dish. The same as with meat, you have the choice of how you want it done. 128-bit, 192-bit, or 256-bit. The higher the number, the safer and more concealed your data will be.

But, you guessed it. If the encryption is better, i.e., 256-bit, it might slow down your internet connection a bit more than if you chose a 128-bit, for example.

Internet speed is full of small tradeoffs and compromises that you have to make to get optimal results, especially if you’re a power user.

Malware and viruses are pesky and often dangerous “vermin” that will work in the background and concealed from you. A slow internet speed is often a trigger that we needed to dig with an antivirus program and find out why it’s happening all of a sudden.

Cryptojacking is all the rage these days as crypto prices are soaring. This type of software utilizes the computer’s power and resources to mine for crypto in the background or even outright steal cryptocurrency wallets owned by unsuspecting users.

What is the Fastest VPN?

According to our tests and those of many others, Surfshark is the fastest VPN at the moment. Even its average speed is far faster than the top speed of most VPNs on the market. And the best thing? Surfshark is one of the cheapest VPNs out there as well. It’s a gift that keeps giving.

What if a VPN Considerably Slows Down my Internet?

As a general rule, a VPN will slow down your internet speed by a small margin. However, if you’re experiencing a big drop in speed after connecting to a VPN, there are some things that you could check that could speed up your internet once again.

Free VPNs have fewer servers that are regularly overcrowded, bringing the speed down for everyone. Paid VPNs are often inexpensive when getting a multi-year contract and are much more secure and faster than all free VPNs.

Check that you are connected to a server in your country or a neighboring one as the data will have a shorter route to travel to and from your device. Sometimes, that isn’t a choice as we have to connect to a server in a certain country, to bypass geo-restrictions, for example.

These days, VPNs come with a variety of security features that we might or might not even need. Still, see that you aren’t using a feature that might be useful but that is hindering you in terms of speed.

For example, double VPN, Tor over VPN, Onion over VPN, and obfuscated servers all add an additional layer of security and privacy but they can slow down your connection

Once again, it’s all about compromise and choosing what is a priority for you.

Why is my Internet Faster with a VPN? (Conclusion)

If you experience faster internet speeds after using a VPN, in general, it was the ISP that was either throttling your internet speed or wasn’t sending your traffic along the most efficient route.

There are many factors that affect internet speed and each one can slow down your internet connection by a considerable amount. If you still have a slower internet speed even after you connected to a VPN, try going through our list above, one by one, to determine what the culprit is.