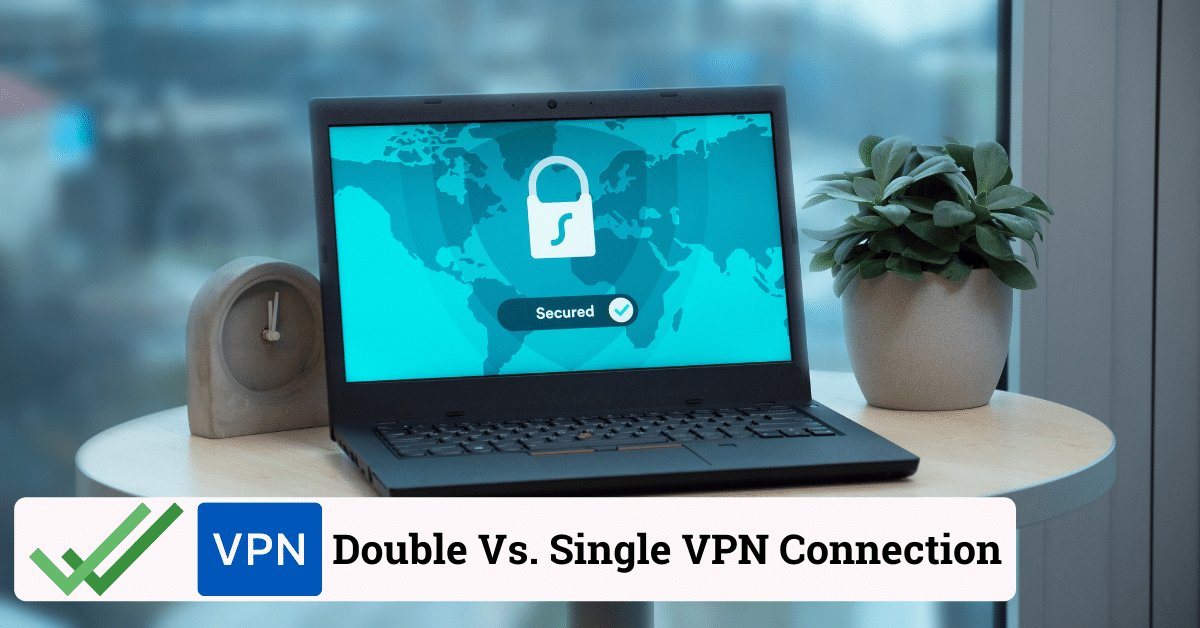 A double VPN is a relatively new and unpopular security feature included with some premium VPN services, like NordVPN and SurfShark. Saying it’s not so popular does not refer to its effectiveness but rather to the fact that very few people truly need it. And yet, knowing that it is an option, we have to ask ourselves, is a double VPN better than just a regular VPN connection?

Since security and online privacy are radically improved with a double VPN, it may seem like a good, solid option for use. But considering the significant trade-off in terms of speed, the choice may not be so clear. We need to inspect and evaluate all the aspects before making an informed decision. A double VPN may be better in many ways, but is a double VPN better for you?

Differences Between VPN And Double VPN

There is a minimal operational difference between standard VPN connections and double VPN. They are similar in function and execution. However, this slight functional difference leads to a significant improvement in your online security and privacy that we cannot ignore.

A standard VPN routes your connection through one server that belongs to the VPN provider. In contrast, a double VPN routes you through two of these servers. These servers are usually located in different countries, sometimes on opposite sides of the world.

This double server process (also known as “multi-hop” or “server chaining”) means that your IP address is removed and replaced with the IP of the first VPN server, which is then again replaced by the second VPN server. Anyone trying to track you online will now have to work twice as hard to get your actual IP address which, if the VPN is doing its work correctly, shouldn’t be possible in the first place.

Server chaining has two negative side-effects, the first of which is speed. Routing your connection through one VPN server already slows down your internet speed. This speed decreases substantially as you add more servers to the equation. The longer the distance between the two servers, the worse it gets. Multi-hop is not beneficial to your internet connection speed.

The other negative side of using two VPN servers is limited choices. Very few VPN services offer double VPN and those that do limit the server options you can choose from. The two servers must be explicitly paired for a double VPN to work, so you can’t always guarantee that you will get your first choice in server location.

When you establish your double VPN connection, your connection is encrypted by the VPN client software or app on your device. In the case of a standard VPN, the VPN  would then decrypt it at the destination server. With double VPN, this first server adds an additional layer of encryption and passes the connection on to the second server, which then removes both layers of encryption.

Having two layers of encryption means that it is nearly impossible to use brute force to gain access to your connection or data. Use wisdom, and don’t share any of your details online. Then you should be able to browse the web, safe in the knowledge that you are protected with some of the most advanced cybersecurity technology known to humanity.

But there is also a dark side. The double layers of encryption slow down your connection even further. Your link has to be processed twice to encrypt it twice; then, it has to go through two decryption cycles as well. Depending on the processing power of the VPN servers and the device you’re connecting from, this could take a long time and make the process even slower.

The double encryption and decryption can also place a considerable strain on the device you’re connecting from. Keep in mind that the data you receive from the internet also goes through the double encryption process and must be decrypted by your local device. If the device is a smartphone or tablet, that could lead to severe sluggishness or even overheating of the device’s processor.

Will A Double VPN Be Better For You?

Based on the information shared by NordVPN, which is one of the few VPN providers that offer a double VPN option, double VPN is not for general web surfing, whether it’s for streaming, torrenting, or just essential home or personal use. Double VPN would be overkill in a scenario like that. A regular VPN connection offers security and privacy that’s good enough for most users.

There are three general categories of people for whom a double VPN may be better than just a standard VPN connection. All three of these categories of people work or live in dangerous situations where exposure of their details could cost people their freedom, or even their lives:

Since journalists and political activists often have to speak their part in situations where their personal details or information about their sources could get them arrested, or worse, using a double VPN connection could be very beneficial to them. The additional layer of encryption and routing will make it twice as difficult for someone to find out who they are.

People In Countries With Strong Censorship Or Government Surveillance

Autocratic governments often exercise much control over the population’s access to information. They monitor online activity to see who tries to breach that control as potential threats to the government. For those who live or travel in such countries, a double VPN could be just what they need to communicate with others or get the information they require.

Those Who Need To Keep Their Conversations Safe From Eavesdroppers

None of us want our personal and private conversations to be leaked or shared online. It would be an invasion of privacy. But few people can say that having their conversations spread online or revealed to others would genuinely destroy them. Yet, some people are in that exact position since they deal with information that could be genuinely destructive if it ended up in the wrong hands.

People who have conversations like those should seriously consider using a double VPN, with a good dose of common sense, to keep themselves, the people they communicate with, and many other people safe. Double VPN isn’t practical for keeping flirty messages from the public eye. For sharing military codes or strategies, on the other hand, a double VPN would be perfect.

Using a double VPN may sound ideal. After all, you can’t get much more secure than that. But a double VPN is not always better for everyone; in fact, quite the opposite. For most users, the sacrifice in speed is not worth the negligible benefits of double protection. Also, keep in mind that any VPN, double or not, is just one part of a security solution. Always use your common sense as well.