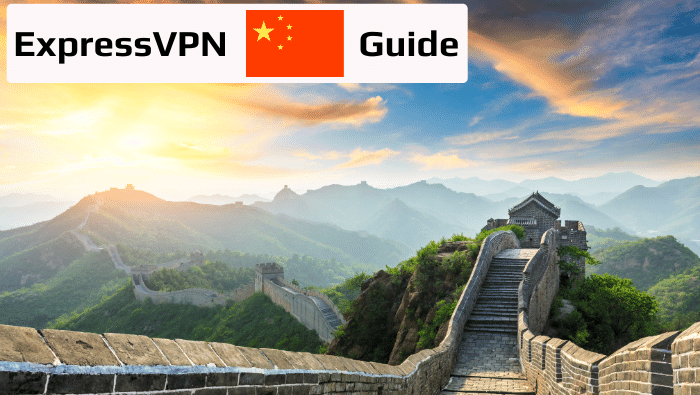 If you’re planning to visit, work, or live in China, there are a lot of reasons why you need  ExpressVPN in China to accompany you during your stay.

For instance, most social media sites and streaming services are blocked in China, but it doesn’t end there. From China’s far-reaching censorship to monitoring internet usage, we strongly encourage you to keep your activity private.

In this article, we’ll show you how ExpressVPN works in China, what to be aware of when using it, and how to keep your privacy secure at all times. In addition to this, we’ve added an extensive FAQ section to answer all your related questions.

Can I Use ExpressVPN in China?

The short answer is yes. Express VPN works reliably across the Mainland. It also works just as easily as outside of China. All you need to do is install, choose your server, and surf the web.

The only thing that you should be aware of is that most VPN websites are blocked in the country. So, you must have ExpressVPN up and running on your laptop or smartphone before you arrive in China. Otherwise, downloading ExpressVPN will be significantly harder.

How to Use ExpressVPN in China

So, as we said, using ExpressVPN in China is fairly simple. You don’t need any extra steps to get the VPN to work. However, there are some things that you need to make sure are enabled, and other things you should be mindful of.

Go to ExpressVPN and install the software on all of your devices. You’ll need to create an account and subscribe to one of their plans to enjoy its services.

Once you have ExpressVPN installed, you’ll find the rest self-explanatory. All you need to do is choose VPN servers that’s close by (in this case, Hong Kong) and enable VPN connection.

If you’re in China and can’t access the ExpressVPN website, that’s okay. Just scroll down to the FAQ section.

This is an important step if you want to keep your IP untraceable at all times. It’s common for people to accidentally get on the web without VPN protection.

The first step is to go to ‘Options’ then choose the ‘General’ tab. You’ll find under ‘Startup’ a checkbox that says “Launch ExpressVPN on Windows Startup”. Make sure it’s checked.

Next, we need to make sure your IP is never exposed in case your connection drops.

To do that, go to ‘Options’, choose the ‘General’ tab, and look for ‘Network Lock’ (Kill Switch). There you’ll find a checkbox titled ‘Stop all internet traffic if the VPN disconnects unexpectedly’. Make sure it’s checked.

For increased internet security, look for ‘Notifications’ under the ‘General’ tab and make sure ‘Show when connection status changes’ and ‘Show when joining unsecured or unrecognized networks’ are also checked.

This is usually checked by default, but it’s important to double-check. We don’t want you to go through all of this and still be exposed.

Also in the ‘General’ tab, go to the ‘Advanced’ section and find the option to ‘Prevent IPv6 address detection while connected’. It’s essential that this option is always enabled because, if not, you can still be traced and your privacy will be compromised.

5. Only Use ExpressVPN DNS Servers

A lot of VPN services hide your internet traffic but still leave your DNS exposed, making it traceable back to your IP address.

In the ‘General’ tab, look under ‘DNS’ and make sure ‘Only use ExpressVPN DNA servers while connected’ is enabled.

Now you can surf the web in China with the highest level of online security and you can also surf all of China’s blocked domains. This leads us to our next topic.

Websites That Are Blocked in China

There are a lot of domains that China actively blocks in the Mainland. They aren’t limited to political websites only and extend to most news websites and social media apps.

Here’s a list of some of the most important websites that China blocks:

Although ExpressVPN usually offers the best connection speeds, this changes dramatically once you’re in China.

Most people complain about slow internet speed in China. The reason for that is mainly bad peering out of the Mainland and China’s bandwidth throttling efforts.

You should always connect to server locations that are close to China. We recommend Hong Kong’s servers the most. Still, you’ll get download speeds of 5-10 MBps, which is considered slow, but acceptable.

Here are some of the most commonly asked questions regarding VPN providers in China. Going through these questions will offer you greater insight into using VPNs in China

What Devices Does ExpressVPN Work On?

ExpressVPN app is available on Windows, Macs, iPhones, Android devices, and, even, Linux. You can even set up ExpressVPN on your router using custom firmware. Doing so will conceal your internet activity on devices connected to your router.

How Can I Know Which Website Is Blocked in China?

You check out this little tool to test which websites are blocked by the Great Firewall of China. It’s updated in real-time, and works in China, too.

What if I Arrived in China without Installing ExpressVPN?

Just make sure you have antivirus enabled when downloading from unknown sources. Unknown websites can claim that they’re giving you genuine ExpressVPN software but it’s a virus instead.

Is It True That ExpressVPN Could Be a Chinese Company?

This is a valid reason to have doubts before downloading ExpressVPN. We’ve looked into it and came to the conclusion that ExpressVPN is in no way affiliated with any Chinese organization.

ExpressVPN says so on its own website. However, we did our own research and looked up the owners of the VPN service, Dan Pomerantz and Peter Burckhardt. We can say with a high degree of certainty that the two founders don’t have any ties to China.

Dan and Peter graduated from Wharton, Pennsylvania, and, in 2009, established ExpressVPN. ExpressVPN states that it’s headquartered in the British Virgin Islands, and denies any claims that state otherwise.

There could be, however, other VPN providers that are secretly owned by Chinese companies. Check the company and all its affiliates, conduct your research, and stay informed.

With the help of our guide, you can now surf the web without any China’s internet restrictions. Make sure to check our blog for more news and tips and tricks to maintain superior privacy.