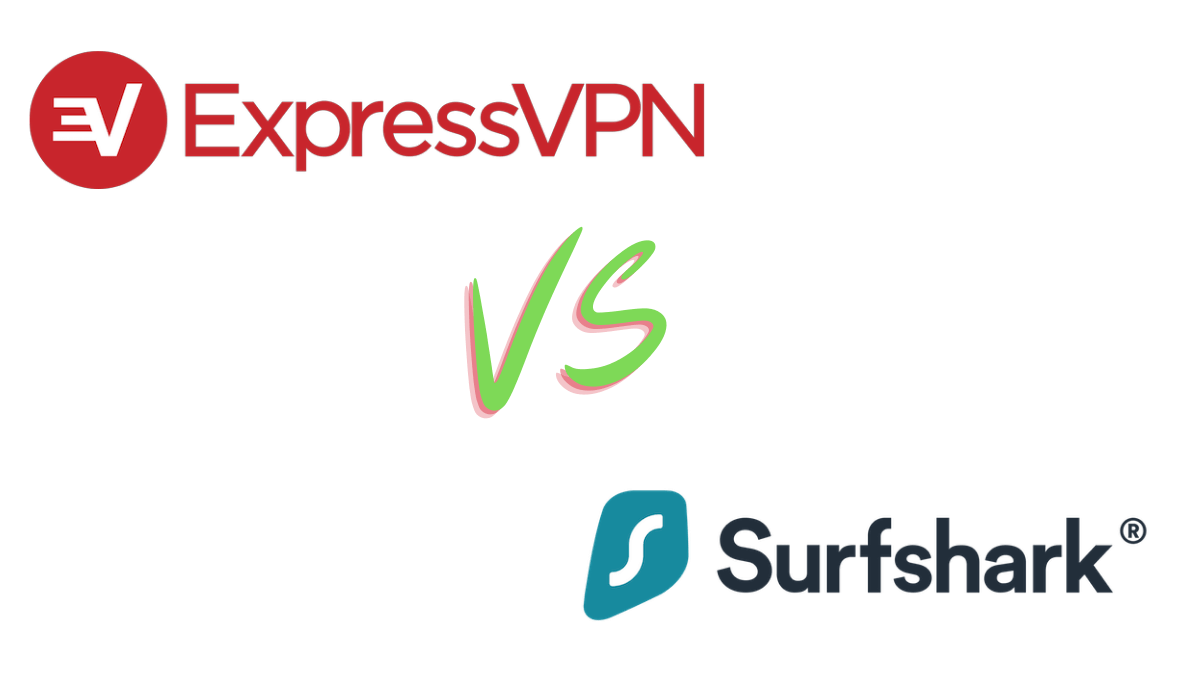 ExpressVPN is a company that specializes in offering VPN services. It was TechRadar Editor’s Choice for 2020, and the company has done a lot to promote online privacy with projects like the Privacy Research Lab on GitHub.

Surfshark is another popular option because it offers affordable VPN services. This company has received a high score on multiple review sites, and it was a finalist for Cybersecurity Company of the Year at the 2020 Cybersecurity Excellence Awards.

Let’s take a closer look at ExpressVPN vs Surfshark to help you choose the safest and most performing VPN provider.

Both companies have their headquarters in the British Virgin Islands. It’s a territory without any legislation for data retention. Local ISPs and other services are under no legal obligations to keep any kind of logs.

British Virgin Islands courts often consult English common law as a reference during cases, but the islands don’t fall under this jurisdiction.

You should know that there are cases where the British Virgin Islands Supreme Court can request records from a company, which means a court could request ExpressVPN or Surfshark to provide records. The VPN providers wouldn’t be able to comply since they don’t keep any logs. There has been at least one legal case where ExpressVPN couldn’t fulfill this request since the records didn’t exist.

ExpressVPN doesn’t keep records of your IP address, DNS queries, or data about your destination or the content you access. The VPN provider collects information about crash reports and app versions but removes any data that could identify users.

You should know that ExpressVPN keeps records of the total sum of data transferred during a session. There is no information about the content of the data transferred. The VPN provider also keeps the information you share when you create an account.

PricewaterhouseCoopers performed an independent audit of ExpressVPN and verified all these claims. Cure53 performed a security assessment and didn’t find any issues.

The VPN provider doesn’t keep any logs of your IP address, DNS requests, traffic, and other information.

Cure53 audited the Surfshark browser extension in 2018 and didn’t find any issues. Surfshark mentions this audit on its website, but the scope of the audit doesn’t encompass the VPN native apps.

Both services offer native apps with a user-friendly interface. The apps are easy to use, and you can establish a secure connection in a few clicks. The installation process is easy as well.

ExpressVPN has native apps for:

There are guides on how to setup ExpressVPN for:

Advanced users can install the ExpressVPN app on their router to protect all their devices.

Surfshark has native apps for the following platforms:

It is possible to install Surfshark on a router or on other Smart TVs, but these steps might be overly complex for the average user.

ExpressVPN offers browser extensions for Chrome and Firefox. You can use these extensions to control your VPN app from your browser, change your location, or access encrypted versions of the sites you visit, if available.

Surfshark has a browser extension for Chrome and Firefox. It can block trackers and malware, hide your IP address, and establish a secure connection.

When comparing ExpressVPN vs Surfshark, the winner for the number of simultaneous connections goes to Surfshark. This VPN provider doesn’t put a limit on the number of devices you can use at once.

ExpressVPN allows you to protect up to five devices with an account.

ExpressVPN uses TrustedServer Technology to protect your data. This technology refers to servers that run on RAM memory instead of writing data to a disc. Data disappears when the server reboots, ensuring that ExpressVPN doesn’t accidentally log sensitive data.

Running on RAM memory also means that the servers download and install the server stack every time they restart. This step ensures that servers run the latest version of the software, and ExpressVPN has complete control over the stack installed on the servers.

Surfshark uses a similar feature with its RAM-only diskless servers. The Surfshark servers rely on RAM memory and never write any of your data to a disc.

The following features are important considerations when choosing a VPN provider.

It’s crucial to use a VPN provider with a kill switch feature. This feature interrupts your traffic if your device drops the secure connection to the VPN server. It can happen if your computer goes to sleep, if your ISP experiences a brief interruption, or if the power goes out for a few seconds.

ExpressVPN has a Network Lock kill switch feature that blocks your traffic if it doesn’t detect a VPN connection. It’s a safe way of ensuring that your IP address doesn’t leak. This feature is available on the desktop versions of the native apps. The mobile apps have a different feature called Network Protection or Auto-Connect.

Surfshark offers a kill switch feature that you have to enable manually. It’s easy to open the settings and turn the kill switch on, but it’s such an important feature that Surfshark should enable it by default. This feature is available on the Windows, Mac, and mobile apps, but it’s unclear if the Smart TV apps include it.

A DNS server returns the correct IP address when your device sends a request for the URL you want to visit. By default, your device will connect to one of the DNS servers operated by your ISP or use one of Google’s DNS servers.

Surfshark uses the IKEv2/IPSec protocol by default, but you can switch to an OpenVPN server if you want to use a different protocol.

ExpressVPN uses OpenVPN on most of its servers, but you have the possibility of switching to IKEv2.

Surfshark has a Whitelister feature you can use to save the sites and apps you trust. ExpressVPN has a similar split tunnelling feature.

Both VPN providers have a 24/7 live chat feature. Surfshark has a ticketing system and seems to have a larger repository you can use to troubleshoot problems yourself.

When comparing ExpressVPN vs Surfshark, we noticed that Surfshark had a few additional features missing from ExpressVPN.

One of these features is multi-hop. Surfshark allows you to connect via multiple servers in different locations to make your activities harder to track. It’s an advanced feature that not all users will need since a VPN connection might be sufficient, but it’s nice to have this option.

Surfshark also has a NoBorders mode. This mode is a switch that can bypass large-scale firewalls. Some ISPs use these firewalls to restrict the internet and block access to specific sites or services. If you’re in a location with a restricted internet connection, the NoBorders mode will let you bypass these restrictions.

A lot of websites and apps use your IP address to verify your location. However, some services access the GPS data from your device to confirm your location. It’s a violation of your privacy and can make it difficult to bypass geo-restrictions.

Surfshark has a solution to this problem with its GPS Override feature. It’s a tool that tricks these apps and services that use your GPS data to confirm your location.

Surfshark’s CleanWeb feature is an ad blocker that also prevents advertisers from tracking you. It blocks malware and phishing attempts. It’s a feature that helps keep you safe online, and ExpressVPN doesn’t have anything comparable.

Both companies own sizable data centers, but ExpressVPN has a larger network.

ExpressVPN currently operates over 3,000 servers in 160 different locations over 94 countries. You can find servers on every continent but should know that a majority of servers are in Europe.

ExpressVPN also uses virtual server locations. This feature will attribute you an IP address from the country of your choice, but your traffic will go through a nearby server to enhance speed.

Surfshark has over 1,700 servers in 63 different countries. It’s a smaller network compared to ExpressVPN, and you won’t find anything similar to the virtual server location feature.

Surfshark specifies that all its servers are P2P friendly. ExpressVPN allows P2P on its network too.

The ExpressVPN tested with streaming services like Netflix, HBO, Hulu, and Disney+.

Surfshark has a Trust DNS app you can use for free. It’s not a VPN service, but you can use this app to get a secure DNS address instead of sending DNS requests to public servers.

Both services offer a money-back guarantee. You can test ExpressVPN and Surfshark for 30 days.

You can use a credit card, PayPal, and other payment options with ExpressVPN. Here’s a summary of the prices:

If you’re disappointed with the service, you have 30 days to ask for your money back.

Surfshark has a 30-day money-back guarantee, and you can pay with a credit card, PayPal, Google Pay, and Amazon Pay.

We found this positive review of ExpressVPN on Reddit. It’s a few years old, but this Redditor reports having a good experience with the service. They explain that they had to try a few different servers before getting good speed, but are overall happy.

Another user reports experiencing a drop in speed after their first week with the service. It’s possible that speed varies depending on the current server load.

We found this useful review of Surfshark on Reddit. The user lists pricing and speed as positive points and also liked being able to connect with an unlimited number of devices. They report that they had to try a few different servers before finding one that worked with Netflix.

This Reddit thread goes over the pros and cons of different VPN providers. Surfshark wins in terms of pricing and performance, but the limited support for torrenting apps is a drawback for this user.

This thread also discusses ExpressVPN. Pros include the company’s good reputation, speed, and apps that are easy to use. The main drawback is that Netflix and Hulu have blacklisted some of the servers.

If you’re looking for a budget VPN provider, Surfshark offers an excellent mix of value and performance. You will get a speed that is comparable to what more expensive VPN providers offer and even bigger selection of features. You can also protect as many devices as you want.

Surfshark also stands out with a few additional features that ExpressVPN doesn’t have. If you want to block ads, bypass a major firewall, or use multi-hop, Surfshark is your best option.

ExpressVPN is a more transparent since it has gone through an audit from a reputable company that confirmed the VPN provider’s claims. ExpressVPN keeps a log of the sum of the data transferred during a session. This policy can be an issue if you’re looking for a VPN provider that doesn’t keep logs of any kind, but the audit confirms that ExpressVPN doesn’t keep sensitive information like your IP address, DNS requests, or the sites you visit.

There are a few drawbacks to consider with ExpressVPN, including the higher price, and lack of the some features.

The speed and transparent privacy policy make ExpressVPN the best option if you want a safe and reliable VPN provider. You will get slightly better speed compared to Surfshark, a server network that is almost twice as big, and peace of mind thanks to the PwC audit.