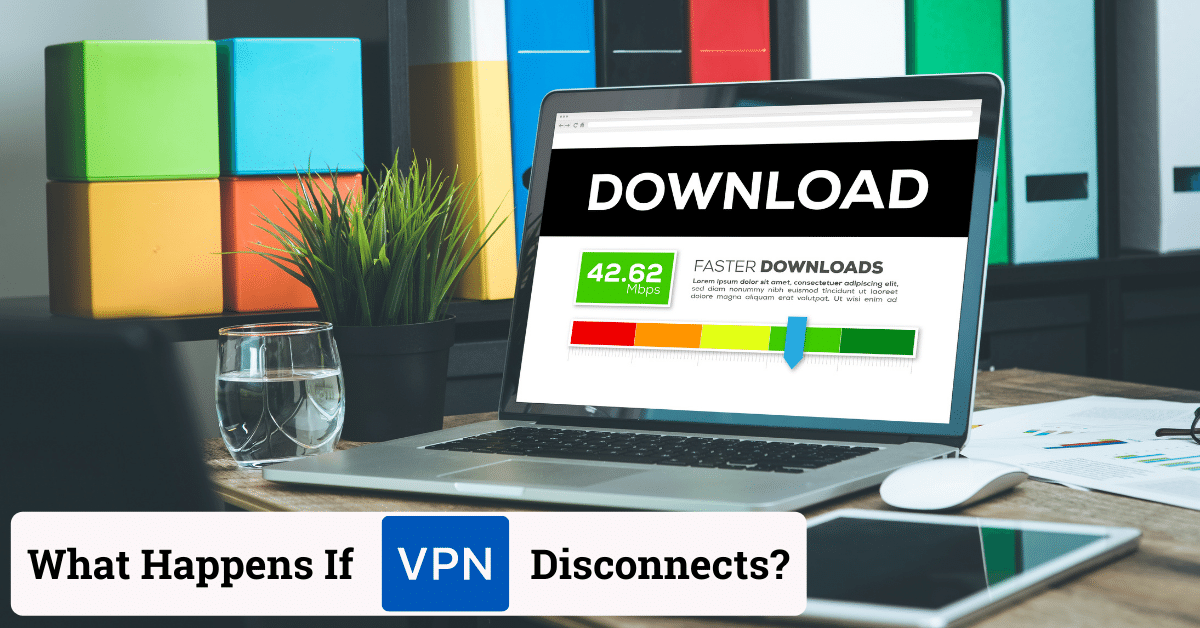 A good VPN is bulletproof most of the time, but sometimes, hiccups can happen, and it’s crucial to understand why a VPN disconnects, what happens if the connection drops, and what you can do about it.

What Happens If VPN Disconnects?

If your VPN disconnects, your real IP address is exposed to your ISP, and all the websites, apps, and services you’re using can see it. All your internet activity is also visible to third parties that might be interested in it.

This may or may not be serious, but it could get you in trouble, depending on what you were doing at the time the VPN connection dropped. For example, if you were downloading files, movies, TV shows, etc., through a torrenting client and they were more or less copyrighted, you could get into trouble with authorities.

In more restrictive countries, a dropped VPN connection could be a huge issue. As we know, countries like China don’t allow access to a good chunk of western content. And, if you get caught browsing these restricted websites, you could get fined.

I’m not sure how that works in practice and how diligently the Chinese authorities monitor all their citizens, but why take a chance.

READ ALSO: Is NordVPN An Antivirus? (Explained For Beginners)

If you’re heavily relying on your VPN to stay private online, having your data exposed even for a fraction of a second is not good and can make you feel naked.

It’s important to understand why a VPN would disconnect and how you can avoid data and privacy leaks.

To avoid any kind of data or privacy leaks, have your VPN on auto-connect as this will turn it on whenever you connect to a network without the need of manually turning on the VPN client.

The next step is to enable the Kill Switch in the VPN client to make sure the internet connection drops as soon as your VPN connection cuts. That way, you won’t be left exposed in the event the VPN disconnects.

What Causes VPN To Disconnect?

There are many reasons why a VPN would disconnect at times or even frequently. Here are the main reasons for this.

We all know that a stable and reliable internet connection is worth gold. Not only will it let you do your work without interrupting you, but your video streaming will also be smooth as silk.

A solid internet connection will also not interfere with your VPN connection, and you’ll have one long and stable VPN session instead of constant disconnections and connections to remote servers.

A smooth connection will give you the most protection and leave the least wiggle room for being left unprotected.

Not all VPN servers are the same, and finding a suitable and fast server that won’t give you lag is the best solution. You can leave this up to the VPN itself by choosing the auto-connect option or by choosing a server manually.

Either way, it’s arguably the best option to connect to a server in your country or region unless you’re trying to enter a geo-restricted Netflix library, for instance.

READ NEXT: Can You Be Tracked In Incognito Mode? (10 Tips For Browsing Privacy)

3. Software or Windows Issues and Updates

Computers and smartphones never lie still and are constantly running apps and programs in the background. That’s on top of the operating system like Windows or Android that are powering our devices.

Sometimes, the software running in the background can get very resource-heavy when updating or doing other tasks. That could interfere with your VPN connection and make it disconnect, leaving you out in the cold if you don’t have a kill switch enabled (more on that later).

If your VPN is still disconnecting, it’s worth having a look at VPN protocols. There are many different protocols that VPNs are using, and you can easily switch between them to find the one that’s best for you.

On top of that, there are VPN protocols like Wireguard that were developed only recently, and VPN providers like NordVPN are using them to separate themselves from the rest of the pack.

Should I Leave My VPN Connected All The Time?

There’s no reason to go online without a VPN. Therefore, it’s best to use a VPN connection at all times by enabling its auto-connect feature that will connect your device to VPN every time you connect to a network.

It will also prevent you from forgetting to connect to a VPN manually. There’s no need to make life easier for hackers, scammers, and meddlesome snoopers like ISPs or advertisers.

A VPN can sometimes slow down your connection, but that can be mitigated by connecting to a server that’s the closest to your location or by testing other VPN protocols.

READ ALSO: What To Do When VPN Is Blocked? (The 7 Options)

Can VPN Cause WiFi To Disconnect?

All good VPNs have a security feature called the Kill Switch that helps protect your privacy. A Kill Switch will turn off the internet connection the moment you lose your VPN connection.

If you have the Kill Switch enabled and your VPN keeps disconnecting for some reason, your internet connection will also be affected.

There could be many other reasons as well, so arguably, the best option would be to contact your VPN’s customer service as they should be able to help you out.

How Do I Stop My VPN From Disconnecting?

Not only is it infuriating, but losing a VPN connection could be potentially dangerous for you and your data. But fear not, as there are some easy fixes that you can try to solve the puzzle of VPN disconnections.

If you’re connected to WiFi, try connecting to the internet via an ethernet cable and see if your VPN connection is more stable. Not only will the speed be faster, but also smoother with no random disconnections.

You could also do this vice versa. If you’re usually connected via cable, try connecting to WiFi as the cable could be an issue (damage or low quality).

As we already mentioned, there are more than a handful of VPN protocols out there, and finding the best one for you is as easy as it is changing between them.

The six major protocols are:

As you can see, some protocols are known for their speed, others for their security, and a few are good all-rounders. Your VPN should be able to use at least a few of these, and you can try configuring the settings yourself or ask for customer support’s help.

3. Switch to a Different Server

Many VPN providers offer specialized servers for different use cases. Some specialize in torrenting, while others are the best for streaming videos from particular streaming services like Netflix, Hulu, etc.

You can also try connecting to a server that’s the closest to your location.

RELATED: What To Do When VPN Is Blocked? (The 7 Options)

As you can configure VPNs at the router level, sometimes there’s a problem if you didn’t set it up correctly. Make sure to follow the instructions to the T as you don’t want to go back and check if it was done properly and troubleshoot.

Firewalls and antivirus software can be at odds with VPNs, and they can cause the VPN to drop its connection. If you suspect that that might be an issue with your setup, try adding your VPN client to the list of exclusions in both the antivirus and the firewall.

5. Switch to a Different VPN Provider

If your current VPN is still disconnecting, it might be time to try a different provider. Many, if not all, providers offer a 30-day money-back guarantee, so if you’re still in that period, ask for your money back and go with the competition.

You can go through a few of them until you find a keeper. We usually recommend one of the following, as they offer the best all-round service at a very affordable price.

NordVPN is the top choice for anyone that values their safety, privacy, and money. NordVPN is at the cutting edge of technology and innovation, but it’s also very affordable, which makes it an exceptional purchase.

NordVPN will keep spying eyes in the dark and keep your data and real location hidden. It’s available as an app on all operating systems and devices and you’ll be able to connect to one of approximately 6,000 servers around the world.

The NordVPN company is offering a complete package that ticks all the boxes for seamless browsing, streaming, and torrenting, as well as speed, privacy, and protection.

You don’t have to wait for Black Friday to get a great deal with NordVPN as they are running promotions regularly. Read more about this excellent VPN in our NordVPN review.

Surfshark is one of the best and most popular, yet inexpensive VPNs on the market that has thousands of servers around the world and the latest in VPN tech that allows you to access the internet even from the most repressed countries.

You can use the VPN on an unlimited number of devices with the best encryption available on the market today. The company also enforces a strict no-logs policy which means that they aren’t observing and, more importantly, logging anything you do while connected online.

Find out more about Surfshark VPN, read our full review.

ExpressVPN is one of the most extensive VPN services on the market that has nearly 3,000 servers in approximately 100 countries. The company offers one-month, six months, and 12-month plans that all come with a 30-day money-back guarantee. You can save up to 35% if you go for an annual plan.

ExpressVPN offers synchronous VPN connectivity for up to five devices. And, although that should be enough for the whole household, you can always set up the VPN on your router to protect the whole home at once. It will then count as just one device.

ExpressVPN has an app for routers, Windows, Mac, Android, iOS, Linux, Kindle Fire devices, and Chromebook as well as browser extensions for Chrome and Firefox.

In the end, ExpressVPN is a tad more pricey than most VPNs. To read more about it and to find the best price, go read our full ExpressVPN review.