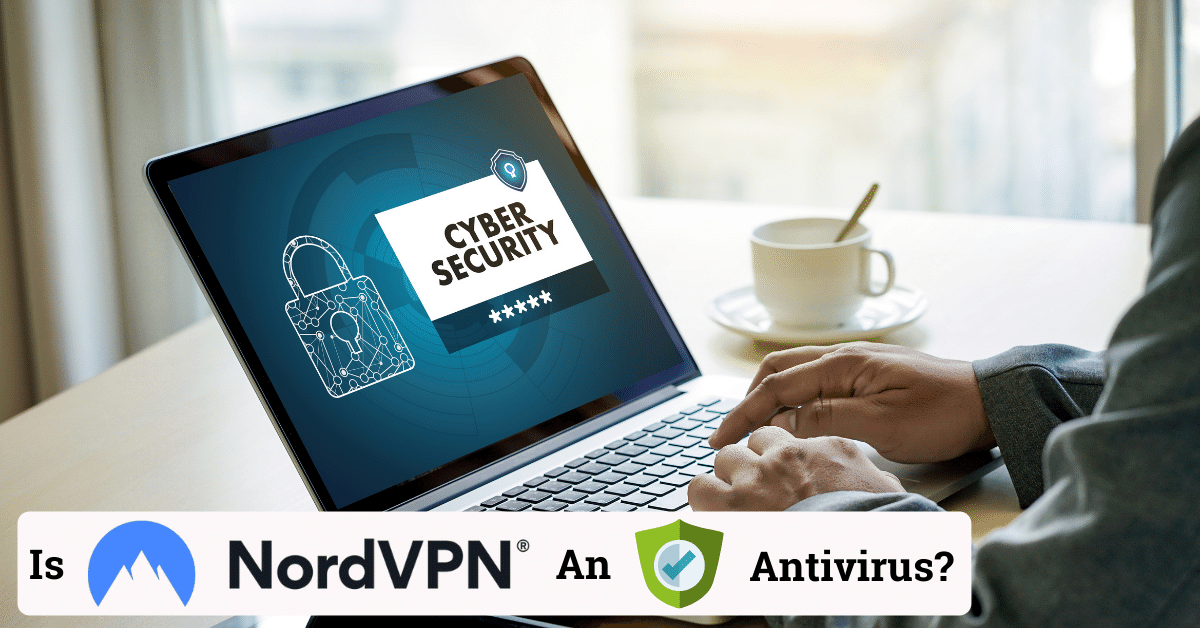 Although VPNs are a part of the mainstream nowadays, they are still somewhat of a mystery to most people and they often tend to confuse VPN and antivirus software.

And NordVPN, as one of the best and most well-known VPN providers, is also a “victim” of this confusion. So, is NordVPN an antivirus?

NordVPN is tasked to protect your devices, but it does so from a different perspective than antivirus software. In that sense, NordVPN isn’t an antivirus although its feature, CyberSec does offer protection against malware, botnets, and annoying ads.

But what exactly is NordVPN and VPN in general, and how does id differ from antivirus apps? Keep reading to find out.

NordVPN is a virtual private network (VPN) that encrypts your internet traffic and reroutes it through remote servers. It hides your real IP address and therefore your location from third parties and lets you browse the internet privately and securely.

You can install the NordVPN app on as many devices as you want, but you can only use the service on six of them simultaneously unless you enable it in your router. That way, all the devices that are connected through it will be protected by the VPN.

Read more about NordVPN in our review and see all the ins and outs.

An antivirus is a software that is designed to detect and remove threats from, mainly computers, but also other devices. The threats aren’t only viruses. On the contrary, the list of threats is extensive and includes:

A solid antivirus app will detect all of the above and much more as it scans your device. And, although antivirus programs can be annoying at times, they also keep your computer safe.

In order for them to keep detecting the newest threats, you should regularly update them.

What’s The Main Difference Between NordVPN And Antivirus?

Although both NordVPN and antivirus programs are there to keep you safe from online threats, they are fundamentally different and do separate things to make your device stay safe.

While a VPN will keep your internet connection and the information sent through a network encrypted, antivirus software will keep your device safe from threats in the forms of malware, spyware, etc.

A VPN doesn’t exclude antivirus and vice versa. In fact, NordVPN has a security feature called CyberSec. It blocks ads, malware-hosting websites and shields your gear from botnet control. CyberSec is available for:

Do You Need An Antivirus If You Have NordVPN?

As people often mix the two up, they feel that they only need one or the other. The truth is, you need both a VPN and an antivirus program, especially if you have Windows on your computer.

VPNs are important tools for enhanced security and privacy, but they can protect you from third parties and not from your own mistakes. For instance, if you click on a malicious link and download a virus, malware, or spyware to your device, a VPN can’t really help you or your device.

The best thing you can do for your safety is to have both NordVPN and an antivirus app installed.

READ NEXT: NordVPN Vs. Mozilla VPN (The 12 Differences)

What Are The Benefits Of NordVPN?

First of all, a VPN like NordVPN vastly improves your privacy and security. But in addition, VPNs also bypass online censorship in prohibitive countries and regimes and stop internet service providers (ISPs) from throttling your internet speed and from seeing your real IP address when torrenting, gaming, etc.

One of the main selling points of VPNs is that they let you stream content from different countries. You see, streaming services such as Netflix impose geo-restrictions and don’t condone watching TV shows and movies that are in other countries’ libraries.

NordVPN can also save you some cash by placing you in another country that has lower prices when you’re, for instance, buying airplane tickets or booking hotels.

And finally, many businesses can and do take advantage of the countless benefits that VPNs offer, making them more secure and less exposed to online attacks and cybercriminals.

NordVPN is one of the largest and most reputable VPN providers around, and that’s why we gave it almost 5 stars (4.8) in our review and recommend it for most people who are searching for a VPN. While not totally perfect, it’s still heaps above everyone else in the market.

What Are The Drawbacks Of NordVPN?

There are some cons to VPNs, but I wouldn’t call them deal-breaking. You see, if you want a reliable VPN service that won’t sell your data to advertisers, you need to use a paid service and not a free one.

Free VPNs don’t have a good track record and can have vulnerabilities in their systems. As I already said, they are also known to keep logs and sell them to third parties.

Although even major VPNs don’t cost much, that may still be a disadvantage for some as they need to pay for an additional subscription.

By using NordVPN, you’re also letting them see your traffic and not your ISP. That’s why a VPN needs to have a strict no-logs policy. Luckily, NordVPN and other major providers like Surfshark and ExpressVPN adhere to this important part of the equation.

READ MORE: The 8 Advantages And 5 Disadvantages of a VPN (A Complete Guide)

What Are The Benefits Of Antivirus Programs?

A good antivirus program also comes with much more pros than cons. You should also opt for a paid service, which kind of sucks, but they’re more reliable, and there’s a much bigger chance that the antivirus makers won’t sell your data to advertisers.

Antivirus software will scan your device regularly and ensure that you don’t even enter malicious websites. And if you do, and you end up downloading malware, it will effectively neutralize it.

Windows and macOS come with security features already built-in. However, the users are the weakest link as we can fall for scammers and phishing attempts and basically invite threats into our systems.

What Are The Drawbacks Of Antiviruses?

The main disadvantage of using antivirus programs is that they use many resources and can slow down your computer, especially during scans. They can also cause conflicts with other apps or antiviruses if you have more than one.

Because free antivirus programs are usually rubbish (except one, stick to the end of the article), people turn to paid apps. But the problems can sometimes arise if you want to end the paid subscription. Some well-known programs require you to cancel the service up to 60 days in advance.

They also mostly charge you for membership automatically, so you have to turn it off manually. But VPNs do it as well, so it’s an industry-wide issue.

There are also many known cases of so-called false positives where the antivirus app detects non-malicious files as malware. This can shut down countless computers worldwide until the problem is fixed.

Even with these drawbacks, it’s smart to have antivirus software enabled on your device, especially a PC.

READ ALSO: The 6 Ways To Hide Internet Activity From Employers (A Complete Guide)

If, for some reason don’t like or don’t want to get NordVPN, there’s plenty of solid alternatives. We’ll just mention two of the best here.

Similar to NordVPN, ExpressVPN can also be installed on almost any device imaginable, including your router so you have blanket protection for all your devices that connect to it.

The company has servers in all corners of the world and you’ll always be able to find a reliable server as there are more than three thousand in 94 countries. It also works like a charm from such restrictive countries like China and the UAE.

If you aren’t sure if you need a VPN or not, or you just want to see what ExpressVPN has to offer, there’s a 30-day money-back guarantee.

Here at inVPN, we give ExpressVPN a 4.5/5 rating. It offers a reliable service with extensive compatibility, premium features, and a forward-thinking mindset. While it’s not totally perfect, its premium price appears with a lot of advantages, and it’s a solid choice for most people.

Find out more about this excellent VPN in our ExpressVPN review.

For less than a cup of coffee per month, you can connect an unlimited amount of devices at the same time and enjoy unlimited bandwidth at some of the fastest speeds. That makes it a perfect fit for anyone that’s looking to stream Netflix and content from other streaming platforms.

Surfshark also offers powerful antivirus software that gives you real-time protection as well as scheduled scans for malware and other threats.

Read much more about Surfshark in our mega review.

If you’re using Windows and you’re looking to get an antivirus program to secure your PC, you might already have it installed. You see, Microsoft Defender Antivirus is available and enabled by default in Windows 10 and Windows 11. It’s also completely free.

Microsoft’s antivirus continually monitors threats to your device, runs scans, and gets regular updates to help identify the latest and most advanced threats.

And if you’re using a smartphone, Mac, or Linux, you’re generally safer and don’t even need an antivirus if you aren’t visiting sketchy websites and downloading suspicious files.