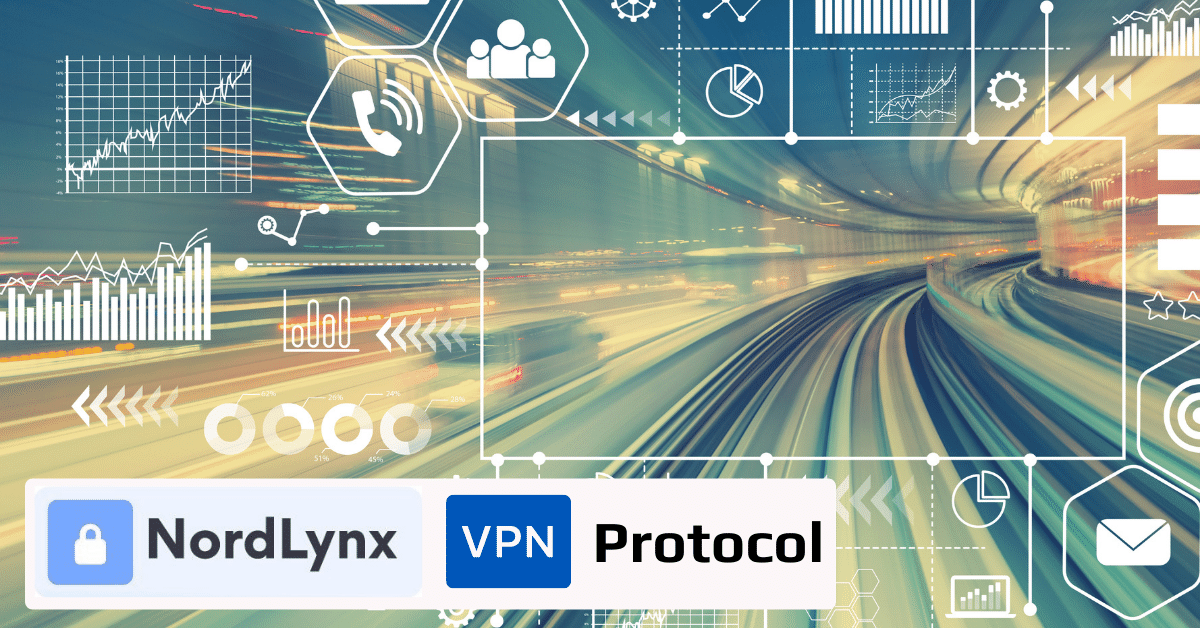 NordVPN users often ask me if NordLynx is a good protocol. They usually only know that it’s a VPN protocol developed by NordVPN, but that’s about it.

Is it better or faster than other VPN protocols like OpenVPN? What does it bring to the table, and what are its shortcomings? Stick around to find out.

But first, here’s the answer to the main question: Is NordLynx a good VPN protocol?

NordLynx is the latest VPN protocol that was built on the WireGuard protocol and has dramatically improved its worrying security concerns. Our tests show that it’s currently offering some of the fastest speeds, and coupled with other NordVPN features, it is the recommended protocol today.

NordLynx is the newest generation VPN protocol developed by NordVPN that the company has been working on for quite some time now in the background.

It’s based on WireGuard, and it really does increase your connection speeds, compared to OpenVPN, for instance. It’s also much faster to connect to NordVPN’s servers and is, most notably, one of the best protocols for privacy and security.

NordLynx is available on:

But what is a VPN protocol in the first place? They’re basically a series of rules responsible for connecting the VPN server with the VPN client. In this case – NordVPN application.

VPN protocols have been around for quite some time since the 1990s when and Microsoft’s PPTP. Some other protocols include Wireguard, IKEv2, and OpenVPN. Each with different traits and functions.

For example, OpenVPN is best known for its security, helping users send private information without fearing that someone would hack or steal them.

IKEv2 is pretty popular, as well, being one of the most secure options. It’s an ideal option for mobile users because it reconnects to servers quickly—an excellent quality to have if you frequently switch between WiFi and data.

RELATED: Is NordVPN Good for Speed? (The 10 Tests Done)

WireGuard is the fastest protocol available at NordVPN, which is why they used it to build Nordlynx. This way, even if WireGuard has security issues, NordLynx will sidestep the protocol because it combines it with NordVPN’s extreme security, getting the best of both worlds.

But to fully understand the connection between the two, we need to understand a bit more about WireGuard – the protocol that’s perhaps best known for its high speed and lightweight code.

While the gold-standard VPN protocol OpenVPN boasts more than 600,000 lines of code, WireGuard only has around 4,000. This should be enough to convince you of how lightweight WireGuard actually is.

The result is an insanely fast and lean resource protocol that keeps your device’s battery life intact.

Fewer lines of code also mean that there are fewer chances of things going awry and less risk of anything compromising the integrity of your connection.

NordVPN has successfully built upon and addressed WireGuard’s security concerns (WireGuard technology is known to store user data on servers), so NordLynx now offers the highest level of security to its users.

The company introduced a new double Network Address Translation system (NAT), responsible for directing users through a new external secure database. The secure database also goes under NordVPN’s zero-logs policy, so you can rest assured no one is saving your information.

That way, the user’s actual IP address isn’t shared with the VPN server. And the NAT gives you a new, random IP address every time you connect, in addition to the static IP address. This makes it much harder for someone to stalk your activity or steal your private information.

As with everything in life, VPN protocols have advantages and disadvantages, pros and cons, and NordLynx is no exception. NordLynx does have substantially more advantages than disadvantages. Let’s go through some of them.

There have always been concerns about WireGuard’s security and the fact that it inherently has to store user data on servers.

However, Nord Security successfully fixed the pressing issue by introducing the double NAT system that, when paired with the strict no-logs policy of NordVPN, leaves your data safe and uncompromised.

NordLynx security policy mainly revolves around keeping your identifying info and online activity private. By applying modifications to WireGuard’s system, I can safely say the protocol was able to achieve that.

NordLynx is a part of NordVPN, and as such, it’s the default protocol of the service and free for NordVPN subscribers. You can always switch to IKEv2 or one of the OpenVPN protocols if you wish.

It’s available for all users, regardless of their chosen subscription plan, and they’re not required to pay extra fees.

One of the best things about NordLynx is that it lets you connect to the VPN servers almost instantly, all thanks to WireGuard, which is known for its lightweight and high speed.

It easily outperforms all other protocols – the likes of IKEv2 and OpenVPN.

You don’t have to be a coder to care about the lines of code in NordLynx. However, when you learn of its direct impact on your connection’s speed and battery life, you’ll value it. The 4,000 lines of code of NordLynx are nowhere near OpenVPN’s whopping 600,000 lines. The substantial difference makes NordLynx much faster and much more power-efficient.

It won’t take much out of your device to connect to NordLynx, and you’ll get out with your battery life intact.

As you already know, only NordVPN users can avail themselves of NordLynx. This also opens the gates for a plethora of valuable features. You’ll get to enjoy all the VPN service’s features, like:

You also get to choose from the 5,200+ servers that NordVPN offers. That way, you can stream ALL of the blocked sites in your region, such as Netflix.

A single subscription also protects up to six devices, so your family will get to enjoy the service too.

As already mentioned, NordLynx works on all the major operating systems, including:

Regardless of your device, you’ll be able to enjoy the speed and dependability of NordLynx.

As with everything else, NordLynx comes with its own share of downsides. They’re not significant, but it’s better to know everything before using the service.

For starters, some iOS users reported connectivity problems. According to them, they had issues staying connected to the service, saying it constantly disconnects on its own. Some people also complained that Nordlynx disappeared from their apps altogether.

All that said, it’s pretty standard for NordLynx to have some bugs, seeing as it’s a relatively new protocol. As long as the issues aren’t significant, the company will hopefully resolve them soon.

READ ALSO: Does NordVPN Work in China? (How to By-Pass VPN Block)

How to Enable NordLynx

NordLynx is inherently easy to enable from your NordVPN app’s settings. Here’s how to do it.

To activate NordLynx on your Windows, install the NordVPN version for Windows. Then, you’ll need to change your settings by clicking on the cog-shaped icon in the upper right corner of the page, right next to the minimize switch.

When the settings open, choose Auto Connect; it should be the first option in the General Settings list on the left of your page.

Next, go to VPN Protocol; you’ll find a dropdown menu. Click on it, and choose NordLynx. Now, you’re supposedly connected; you’ll be able to connect to any server in an instant.

You’ll need to go to the NordVPN app’s settings in the upper right corner on your iPhone, iPad, or Macbook. After tapping on it, the setting menu will pop out.

Now, go to VPN Protocol and tap on that. You’ll have a few protocols to choose from; choose NordLynx, and you’re done.

After downloading NordVPN to your device, open the app and tap on the icon in the upper left corner shaped like a cogwheel. When you tap on it, it’ll open the Account and Settings Menu.

Next, tap on VPN Protocol and choose NordLynx. That’s it. It’s now enabled.

To set up NordLynx on your Linux device, you’ll have to download both NordVPN and WireGuard. Afterward, open the Linux terminal and type ‘nordvpn set technology NordLynx.’ Now, enter ‘nordvpn c.,’ and you’re done. Easy.

READ NEXT: Do You Need a VPN If You Don’t Use Public WiFi? (Pros & Cons)

OpenVPN is one of the oldest and most used VPN protocols in the world. Most providers still rely on it for their VPN services. It’s also open-source, which means that many people added their “two cents” to its code which is upwards of 600,000 lines!

There are two main types of OpenVPN:

OpenVPN has its share of pros and cons. For instance, it’s mature and trusted but also can be challenging to set it up manually. It’s also free and has worldwide community support, but it is also slower to connect to servers and has somewhat higher latency.

Read more in our comparison: WireGuard vs OpenVPN

Internet Key Exchange volume 2 is an updated version of the original IKE. The update was done in 2005, some seven years after the Internet Engineering Task Force (IETF) defined IKE in 1998.

It’s one of the best protocols for mobile devices because of its main benefit – fast reconnecting on mobile networks. But also from WiFi to mobile, for example. It’s much better at doing it than OpenVPN, which is, as already mentioned, much slower to connect and reconnect.

L2TP has to be used in conjunction with IPSec to provide a complete package of encryption for privacy. This protocol has a long history and naturally newer versions as well. But it’s still one of the best protocols for security and privacy that’s also harder to configure and uses a lot of resources.

Point to Point Tunneling Protocol is one of the first VPN protocols that Microsoft developed in the 1990s for MS Windows 95 and dial-up connections.

Although it’s one of the fastest protocols and easiest to set up, it has many disadvantages like lack of security and the fact that the NSA monitors it. However, if you need to access geo-blocked content from streaming (and other) websites, it’s still one of the best ones.

Secure Socket Tunneling Protocol is another one that was developed by Microsoft for one of their Windows operating systems. This time, it was for Vista. It’s primarily used for Windows, although it can work on Linux.

What can we say to surmise this article that wasn’t already said? Not much. Except that NordLynx is certainly not the last VPN protocol as long as the internet stays fragmented and even unavailable in some parts of the world.

As long as there are geo-restrictions, internet censorship, ISPs that slow down the bandwidth, and governments that snoop on their citizens, there’s always going to be a need for high-quality protocols such as NordLynx.