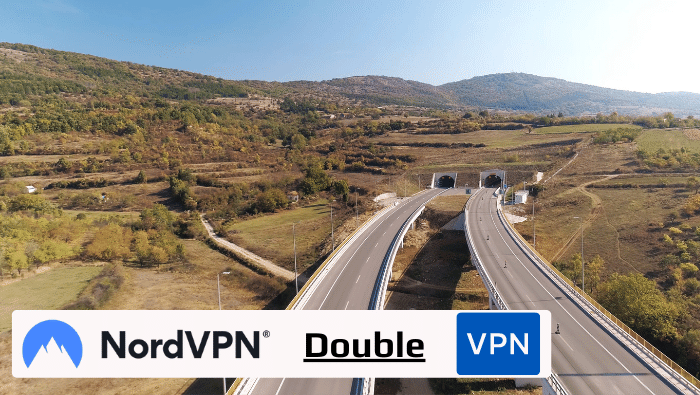 A double VPN is also called Multi-Hop or Secure Core. It is similar to the normal VPN but with an additional layer of another VPN server. Consequently, a double VPN, such as NordVPN multihop, ensures your connection is even more private and secure.

This means that your data is still encrypted using AES 256-bit encryption. However, instead of passing through a single server, it goes through another secure tunnel to a second server that changes your IP address and encrypts it again. The double-layer gives your data extra privacy.

The double encryption feature is provided by various VPN providers, but our best pick is the one NordVPN offers. NordVPN double VPN is part of its standard packages and doesn’t require additional costs.

It’s also relatively simple to set up from the NordVPN app. The app is readily available on any Android, iOS, macOS, Windows, or Linux device. Other providers that offer double VPN include:

NordVPN Double VPN & How It Works

NordVPN’s Double VPN is a feature that helps improve your security and privacy while browsing or performing actions online. Your data goes through an extra layer of encryption because it is routed through a second VPN server, rather than the usual one alone.

The encryption process starts from your physical device. When you’re using your phone to browse the internet, the data is encrypted before being sent to NordVPN’s servers.

The server receives your data, decides where it needs to go, encrypts it again, and dispatches it to its intended destination. Your twice-encrypted data arrives at the second NordVPN server, which decrypts the necessary parts. The server encrypts it once more before finally sending it to your intended server.

This process of heavy encryption means that someone trying to track your traffic from your end can’t pinpoint where it’s headed. At the destination, potential trackers can’t tell where the traffic originates. As a result, you have high levels of privacy and security when using NordVPN’s double VPN feature to access the internet.

What Country Options Are There?

The NordVPN app has a wide range of specialty servers designed for the double VPN feature.

You can choose servers in various countries, including:

Let’s take a quick look at some of the upsides and downsides of NordVPN Double VPN.

The primary benefit of using a double VPN is an increased level of privacy. The additional layer of protection provided by routing your internet connection through two servers means that any personal data is secure from any hackers or trackers looking to spy on your online activities.

NordVPN’s Double VPN offers increased security and privacy without extra charges. The double VPN feature is a part of the standard subscription packages.

Easy to Set up

The NordVPN app is incredibly user-friendly. It has the option of automatically selecting the optimum servers for your location, and setting up a double VPN on their app is a breeze.

The biggest drawback of using a double VPN is that you may experience slower connection speeds. This slight dip in speed is due to your data passing through more than one server before reaching its final destination. The process of encrypting and decrypting your data on each server also takes time and may impact your connection speed.

It typically affects users with slow speeds. However, even with good internet speed, the drop is still noticeable.

Where to connect to NordVPN’s Double VPN

NordVPN’s Double VPN is included in their subscription package. If you already have an active subscription, you don’t need to incur any additional costs to access this feature. The double VPN is available, and you can easily enable it on any Android, iOS, macOS, Windows, and Linux device.

When to Use a Double VPN

Using a double VPN comes in handy when dealing with sensitive data and carrying out certain activities online where high security is paramount. If you’re in a country with strict censorship laws, heavy tracking, or surveillance systems, an extra layer of encryption makes it much harder for eavesdroppers to track your online activity.

It is also comforting for individuals who want to know that their online activities have an extra layer of protection.

When Isn’t a Double VPN Needed?

Should you always use a double VPN? While the additional layer of protection and security is beneficial, it isn’t necessary for your day-to-day internet use. In particular cases, such as streaming movies, torrenting, gaming, and accessing blocked websites, it’s better to use a regular VPN rather than a double VPN.

Using a regular VPN won’t slow connection speeds since there is no heavy encryption and decryption.

Apart from NordVPN, some VPN service providers also offer a double VPN feature. These include the following:

ProtonVPN is a VPN provider based in Switzerland, a country with one of the strongest privacy laws, and has over 1200 servers in 55 countries that it uses to serve its global customers. Their Secure Core feature passes users’ data through multiple servers, which are in high-security data centers for strong, physical security.

This feature isn’t included in their free and basic packages but is exclusive to Plus and Visionary plan subscribers.

Surfshark is a VPN provider based in the British Virgin Islands. With over 3200 servers spread across 65 countries, it is one of the most popular VPN providers. Surfshark is the only other provider, apart from NordVPN, with a multi-hop feature included in its subscription without any extra costs.

Similar to ProtonVPN, Perfect Privacy is a VPN provider based in Switzerland. It has over 50 servers in 26 countries. Their multi-Hop feature is different from the others mentioned in that it allows users to create a cascade of up to four hops. This means that your data will be encrypted four times, complicating traffic correlation and making it extremely difficult for an attacker to get your personal information.

IVPN is relatively small compared to other VPN providers. It has 40 servers in 29 different countries. Their multi-Hop feature is not available in the standard version and you’ll need to subscribe to the pro version to utilize this feature.

Astrill is a VPN provider based in Seychelles with servers in 112 cities across 60 countries. Unlike NordVPN, their Multi-Hop feature isn’t included in any of their pricing plans but only accessible via VIP add-ons at an extra cost.

The choice of whether or not to use a double VPN boils down to what you’re using the internet for. If you’re sending or receiving sensitive information such as emails and messages where your top priority is high security and privacy, then you should use a double VPN.

Otherwise, for other functions such as gaming or streaming, stick to a normal VPN as a double VPN will only slow down your connection.

What Is a Double VPN?

A double VPN is similar to a standardl VPN but includes an extra layer of protection to help strengthen your privacy. While your data is still encrypted using AES 256-bit encryption, it is passed through an additional secure tunnel to a second server that changes your IP address and encrypts it a second time, which guarantees an extra privacy layer.

What Is NordVPN Double VPN?

NordVPN Double VPN is a double encryption service offered by NordVPN. It is one of the best double VPNs out there, and it is included in the subscription packages. What’s more, it is super simple to set up on your Android, iOS, Windows, macOS, or Linux devices.

How to Set Double VPN On NordVPN. To activate the double VPN feature on NordVPN, follow these simple steps: