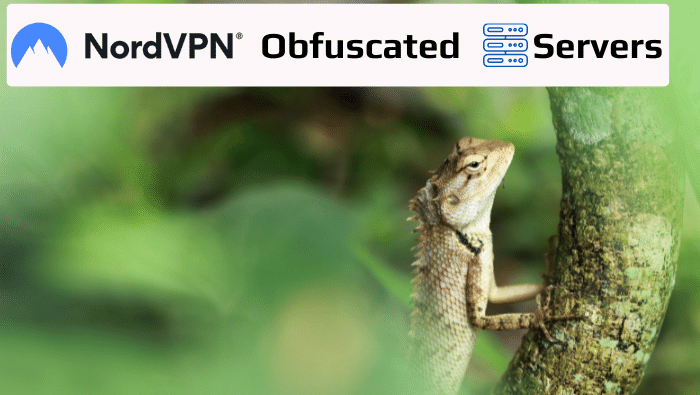 If you’re interested in enjoying the internet with a little bit more protection, you can choose to connect to NordVPN’s obfuscated servers. They’re designed to make your VPN traffic indistinguishable from VPN and even regular internet traffic.

NordVPN obfuscated servers provide more protection by changing your VPN-encrypted activity to regular HTTPS activity. This means that third parties, even the most advanced ones, won’t be able to detect that you’re using a VPN service.

So whether you’ve heard of them or not, you’ve come to the right place because we’ll tell you everything about this fantastic feature. Let’s dive in.

How do NordVPN Obfuscated Servers Work?

These special servers allow you to access restricted and censored content anywhere while protecting your history and activity from being detected or tracked by third parties.

Network administrators and other third parties easily detect regular VPN servers. This is why these obfuscated servers can provide easy and safe access to any restricted content.

These servers are designed to mask your VPN traffic and change it to regular HTTPS traffic. This means that no third party, regardless of the tools it has, will be able to detect that you’re using a VPN.

You will be undetectable while enjoying the perks of using a reliable VPN service, which gives you maximum versatility and provides you with safety while browsing the internet.

Moreover, these obfuscated servers will work in any situation where the other servers don’t work or are inaccessible. This means that you will always have your internet activity protected, even at locations where VPN providers are banned, restricted, or disabled.

NordVPN Obfuscated Servers are designed to overcome the most powerful firewalls without being detected. It’s safe to say that NordVPN obfuscated servers excel where other VPN servers fail.

Who Can Use Obfuscated Servers?

You’re probably now asking about who would benefit from using these specific servers? Here are several examples.

Since NordVPN obfuscated servers can help you bypass the Great Firewall of China, they can be used to browse the internet and share content without getting into legal issues.

While other VPNs don’t work in China, the obfuscated servers of NordVPN are able to overcome the heavily restricted regulations of China and other countries in the world.

In addition to these examples, you should consider using obfuscated servers whenever the regular servers don’t work or you think that they won’t provide the needed protection.

NordVPN already has more than 5,200 servers located in 60 countries, with some specialty servers with optimized locations and dedicated IP addresses. Here is how to access the obfuscated servers:

Compared to regular servers, these are a bit slower. However, this is due to the extra protection they provide.

This is why, if you don’t think that you need that extra privacy, it might be a better idea to use the regular servers.

If you’re using obfuscated servers to overcome heavy censorship, it will be more time-consuming to download these servers. Moreover, the process will differ based on the device you’re using and its operating system.

It’s always recommended to download NordVPN before heading somewhere with heavy internet censorship or using a network that bans VPN services in the first place. You might not be able to open the website or download any servers.

READ NEXT: Can You Share a VPN With Someone? (Important Facts to Know)

What If Obfuscated Servers Aren’t Working?

There are some rare situations where the servers might not work properly. But here are some tips to help you overcome the problem.

In most cases, you won’t have to do any of this because NordVPN obfuscated servers work just fine. However, if you face any inconvenience, following these steps should solve the problem.

As we already mentioned, obfuscated servers tend to be slower than regular servers as they have to do more work in the background to make your VPN connection indistinguishable from other traffic on the internet.

For that reason, you should only use obfuscated servers if there’s a real need. For example, you live or are traveling to a restricting country or a service, website, or platform uses a VPN blocker.

Apart from obfuscated servers that hide the fact that you’re using a VPN in the first place, there are also double or multi-hop VPNs available.

The fundamental difference here is that double VPN won’t hide the fact that you’re using a VPN but will, in fact, double down on it and connect you through multiple VPN servers to enhance your privacy even more.

So, if the fact that you’re using a VPN doesn’t get in the way of accessing the internet but you nevertheless want added privacy and security, a double or multi-hop VPN is the way to go.

Again, as the traffic goes through several servers, your traffic might slow down.

NordVPN also offers double VPN as a part of its standard subscription and doesn’t won’t cost you additional money.

Many institutions, websites, platforms, ISPs, and even whole countries ban the use of VPNs to access the internet as a whole or certain websites, streaming platforms, or services.

I won’t go deep into reasons why they feel the need to do it but it mainly has to do with internet censorship, gatekeeping, and copyrights.

Countries with heavy censorship ban the use of VPNs, and only official, state-sponsored VPNs can be used, mainly for business purposes.

Universities and schools also generally ban VPNs so that students can’t access streaming, torrenting, entertainment websites, or social media. But also, to have more control over users of their WiFi network.

And lastly, streaming services like Netflix block VPNs so that users can’t access other countries’ libraries due to streaming rights.

How do Blockers Work?

A VPN blocker will generally collect and block all known IP addresses that were used by VPNs as well as certain ports used by VPN providers to route the internet traffic.

Some blockers will even analyze data packets to find signs of encryption and based on that, block access.

RELATED: What To Do When VPN Is Blocked? (The 7 Options)

NordVPN and other major VPNs such as Surfshark and ExpressVPN have to stay one step ahead of governments, institutions, and companies if they want to have a viable business.

Obfuscated servers fill a pressing need for millions of people worldwide that want to access the internet but can’t do so because of internet censorship and other reasons.