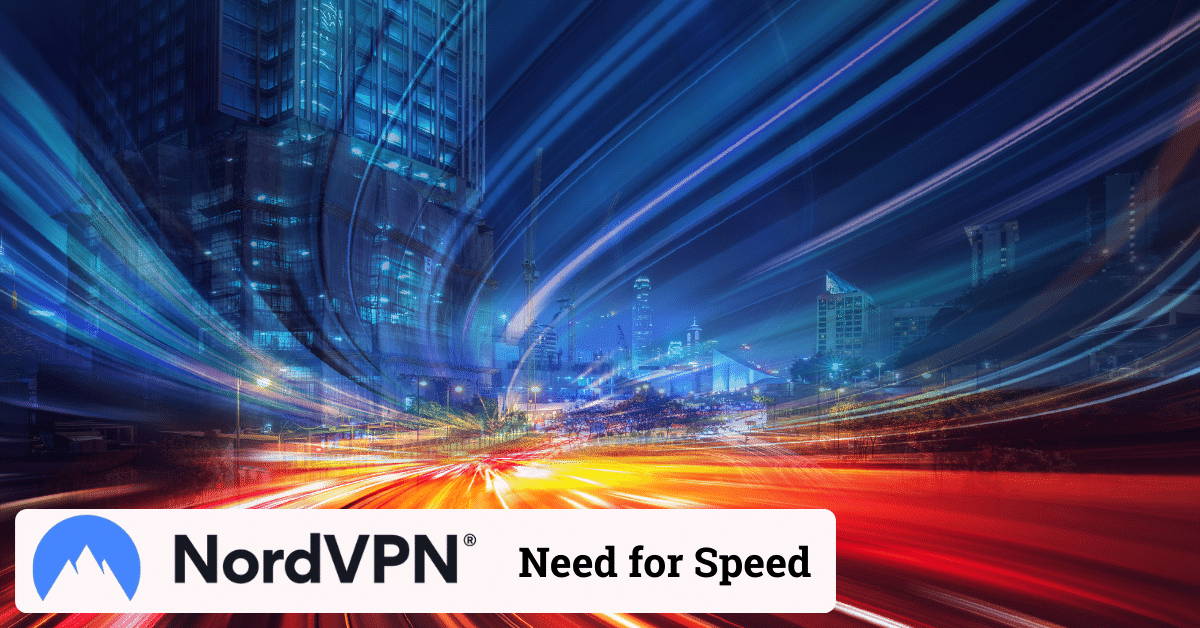 Speed can make or break a VPN. That’s why most VPN providers are investing huge chunks of their money into updating and upgrading their server network.

By having more servers that are close to the end-user – you, a VPN connection should be faster and more stable.

But how does NordVPN fare in 2022, and are their servers (still) fast? Has their server network expanded? What do the real life tests say?

Before we dive deeper into our testing, here’s a short verdict:

Throughout our testing of NordVPN speeds, we haven’t seen too many dramatic speed drops and in one case, we even saw an increase. NordVPN is still one of the fastest VPNs out there, no matter what your base bandwidth is.

As you can see on the chart above, I’m based near Lisbon so that’s the base speed without a VPN connection. I took three tests for each city using Speedtest by Ookla and letting NordVPN choose the fastest city and fastest server.

Let’s go through the test results. But first, here’s the base result with no VPN:

Being based near Lisbon, NordVPN’s servers based in Portugal’s capital were naturally closest to my true location. The download speed was almost the same as with no VPN and the upload was actually better by nearly 12 Mbps.

We’re still in Europe. In London, the download speed did fall off by 14 Mbps while upload is yet again a bit faster at 53.48 Mbps. The connection was still fast and it took less than a second to connect to the default fastest server. Ping has risen to 34ms.

There are almost 2,000 servers in the US that we could have connected to and NordVPN chose New York. The download speed fell of by only a few Mbps while upload is much faster at almost 64 Mbps. The ping has risen dramatically to 105 ms.

When connecting to a server in Montreal, Quebec, we have experienced drops of up to 15 Mbps and similar or better upload speeds than in our base test result, more than 5,200 km (3,200 miles) away. Ping clocked in at 108 ms.

READ NEXT: Does NordVPN Work in China? (How to By-Pass VPN Block)

More than 15k km or 9,3k miles away from Lisbon is Perth. As you can see, the ping is brutal (293 ms) but download speeds were ok at 54.25 Mbps. Upload did fluctuate from mid-thirties to high forties.

Almost 7,000 miles away from Lisbon is Tokyo, Japan. The download speeds fell by almost 30 Mbps and upload is in the mid-thirties. Ping is again close to 300 ms.

Johannesburg is home to around 50 NordVPN servers. It’s also more than 5,000 miles away from my base. Download speeds were between 30 and 47 Mbps while upload speeds stayed in mid-thirties during our tests.

For such a huge country, it’s surprising to see only one city – Sao Paulo. Although there are 20+ servers there, we would like to see at least one more location. Still, the servers weren’t busy at all, which is normal considering it was the middle of the night there.

Download speeds were ok at 50.53 Mbps and upload was similar. Ping was above 220.

You have to put internet connection speeds into context. Generally, the closer you are to a server you’re connecting to, the better. However, as you could see in the chart above, We got the best download speeds when connected to a server nearby and in New York.

New York is thousands of miles away from Portugal, yet the speed was on par with the baseline result. We also got even better speeds when connecting to Frankfurt, Germany, which proves that sometimes a VPN can speed up your internet connection.

On the other side of the spectrum were servers in Japan, Australia, South Africa, and Brazil where we saw a significant slow down of our connection. However, those speeds should suffice for streaming, torrenting, etc.

The main point of concern would be the higher ping which would make these servers really bad for gaming.

All-in-all, we have seen results that we were more or less expecting. Proving that NordVPN is still one of the fastest VPNs out there.

NordVPN is still one of the best and biggest VPNs on the market, which is why our reviews have high marks for it. It’s also the most suitable for most people who are looking for a VPN.

We admit that it isn’t perfect, and the company has had its share of problems that were characterized as minor by some, and as major by others but the concerns shouldn’t be a cause of worry for most users.

What things come down to is the balance of price, features, servers, trustworthiness, and of course, speed.

Let’s briefly summarize these to see why NordVPN is so popular worldwide.

NordVPN costs more than many other VPN options, although the difference is just a few dollars each month, NordVPN provides a high-quality service that is worth the extra money.

NordVPN also comes with a 30-day money-back guarantee, which makes NordVPN a safe bet to check out.

NordVPN offers excellent features, including some customized software that drastically improves the speed of their connections. They have many servers located around the world, as well as multiple specialty servers for P2P sharing, streaming, or even getting additional protection through a double VPN setup.

While their record has a few marks, the same can be said for any VPN company of considerable size, and this doesn’t hurt or impact most users. Their willingness to go through third-party audits is a strong point in favor, especially because they have a no-logs policy.

NordVPN does not keep any logfiles, has an extremely simple user interface, uses strong encryption standards, deploys shared IP addresses for its servers, provides customers with fast access speeds, actively works to resolve complaints about its service in a timely manner, and takes privacy very seriously.

The company has an extensive choice of servers located in many different countries paired with the latest and greatest technology. There’s a wide variety of servers, especially in the most popular destinations.

NordVPN has excellent speeds that should be more than enough for most people. Connecting to a server halfway around the world will naturally slow down a connection however, finding a fast server in the US should be extremely easy to do.

Most other countries are also well represented with tens or hundreds of servers spread out in one or more locations. Although, some countries would benefit from a bigger choice of connections.

The company has thousands of servers across the globe, so we decided to have a closer look at its server network.

At the time of writing this, there were almost 2,000 servers in 15 cities across the US. The cities are spread out nicely and include Atlanta, Buffalo, Charlotte, Chicago, Dallas, Denver, Los Angeles, Virginia, New Jersey, Miami, New York, Phoenix, Salt Lake City, San Francisco, San Jose, Seattle, and St. Louis.

With such a vast array of servers, you’re sure to find the perfect one for your needs.

Canada is well covered with almost 500 servers in three cities – Montreal, Toronto, and Vancouver. Just don’t ask for a dedicated IP as there aren’t any.

In the UK, there was only one server location – London that contained 440+ servers. You’ll find a server for any of the three protocols that NordVPN uses. They’re also optimized for P2P, Double VPN, dedicated IP, and some of them are obfuscated.

All in all, there’s a good choice of servers based in London, England, UK.

NordVPN has servers in 36 countries in Europe

NordVPN has servers in 36 countries in Europe. Out of those 36, only the Netherlands and France have servers that support all the special features (P2P, obfuscation, Double VPN, and dedicated IP). Germany is missing Double VPN, and Sweden and Switzerland – dedicated IP.

All the other countries have only regular servers and P2P support (except Cyprus, Ukraine, and Georgia). Germany and France are the only ones with two cities (two server locations).

Asia is well represented and has ten countries with NordVPN servers. All the major Asian countries are there, except China. If you aren’t counting Hong Kong and Taiwan 🙂

SIx out of the ten countries only have regular servers while Taiwan also supports Double VPN.

Australia has five locations that contain almost 200 servers in total. The cities are Adelaide, Brisbane, Melbourne, Perth, and Sydney.

The servers support all three protocols but are only regular and P2P support. Nothing else.

This region is represented by India, Israel, South Africa, Turkey, and the UAE. The latter two notably have obfuscated servers as VPN usage is frowned upon in these two countries.

India, being such a huge country with so many people only has 30ish servers, unfortunately.

Why is my NordVPN so Slow? (How to Boost Your VPN Speed)

There are many factors that go into VPN speed. And, while NordVPN is one of the fastest and most stable VPNs (based on our tests), it may not be working as intended when you connect to it.

Now, before you go asking NordVPN for a refund, you might consider trying some of the following steps that can help speed up your NordVPN connection. You can read more about it in our article How To Download Fast(er) with a VPN (A Complete Guide).

Sometimes, the easiest solution works the best. In this case, rebooting your device might be a quick fix for your dwindling speeds. If that doesn’t work, check your VPN and internet connection as well as your WiFi router that perhaps also needs to be rebooted.

If you’re on a WiFi connection, consider connecting directly through a cable as that’s generally a more stable solution.

2. Connect to a different server

NordVPN has thousands of servers across the globe. If you’re connected to a remote server in a faraway country, try connecting to a different server or a server that’s the closest to your location.

It could also be peak time and a server could be nearing its capacity and therefore slowing down considerably. It’s worth playing around with servers even when NordVPN is recommending a server to you that’s supposedly the fastest.

OpenVPN is the industry standard and is a mature and stable protocol that is recommended for the most security-aware people. A similar story is with IKEv2/IPsec, while the newest protocol, WireGuard.

NordVPN gave WireGuard its own magic touch and is recommended by the company. According to Nord, this protocol is fast, lean, and based on academic research.

You can try switching to a different protocol if you aren’t satisfied with the performance of your current one.

Split tunneling gives you the ability to send traffic through the VPN tunnel from the apps that you choose. This is helpful if your VPN speed isn’t at a satisfying level.

If you only encrypt your browser traffic, for instance, your VPN connection could speed up as no other traffic is going through the VPN tunnel at the same time.