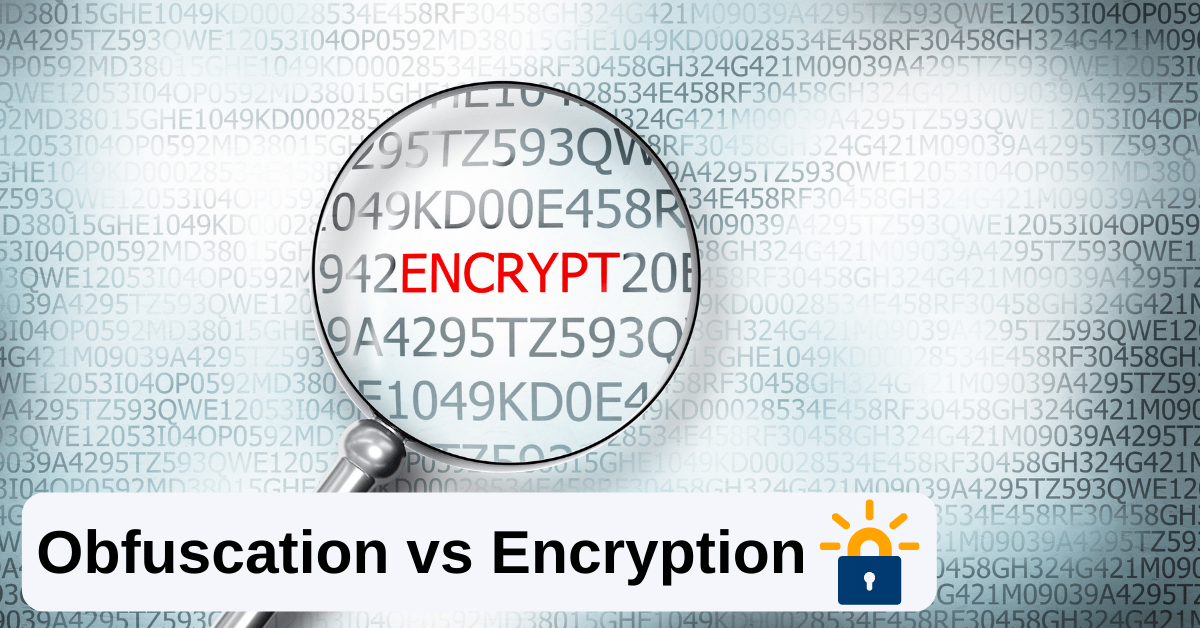 The two terms are often confused or used interchangeably. But are they the same? And if you were to place obfuscation vs. encryption, which would win?

Obfuscation and encryption are entirely different concepts. Encryption deals with changing data, like text, into symbols or code to hide the original data completely. Obfuscation is hiding the purpose or meaning of data without changing the data itself.

While these terms describe different and unique processes, their purpose is very similar.

Determining which is the most important or which you should use in a specific scenario requires a deeper understanding of their differences and how you can potentially combine them to improve security and privacy.

How Does Encryption Work And What Does It Do?

Encryption involves the scrambling of text. Standard plain text is taken and scrambled up using encryption keys to change it completely.

Once you reaccess the text, a decryption key unscrambles it to change it back to its original format.

Sometimes the same key is used to encrypt and decrypt the data, referred to as “Symmetric Encryption.”

Encryption completely changes the contents of data. It makes it impossible to read the data without the proper key required to decrypt its contents.

Keys don’t make encryption completely fail-safe, though – there are still ways for hackers to gain access and interpret the data, but it is a long and complicated process.

For example, encryption is like the secret notes that many school kids send to their friends.

They usually have a piece of paper with symbols or characters scribbled on them, each to replace a particular letter of the alphabet. This piece of writing is the encryption key.

The author of the note would use the key to write their message, which they then send to a friend.

What Is Obfuscation And What Does It Do?

Obfuscation or “beclouding” makes data confusing. It hides the true meaning of data or clouds it, making it difficult to understand. All of this does not change the original data at all.

You don’t require a key to decipher obfuscated data. An algorithm makes the data easy to understand and interpret, similar to a decoder ring.

One widespread use of obfuscation is in DRM (Digital Rights Management) for software. It enables software to work only when another piece of software is present, assisting with copy protection.

Many games from the late 1990s and early 2000s, for example, would only work if you had the original disk inserted in the computer’s CD or DVD Drive.

An example of obfuscation would be the phrase often used in movies to indicate the arrival of the President. Instead of the security team saying, “The President has arrived,” they say, “The Eagle has landed.”

Obfuscation vs. Encryption As Used By A VPN

A good VPN will make proper use of both obfuscation and encryption. They each have their place and their purpose in a VPN environment.

Encryption In A VPN

A VPN creates an encrypted “tunnel” or connection between your device (computer or smartphone) and the VPN server.

When you send data to the internet via a VPN, the data is encrypted using your public key by the VPN client on your device.

The VPN client then passes the data to the remote VPN server, where the server decrypts it using the private key. When the server responds, the same process is repeated but in reverse.

Through this encryption process, the VPN ensures that, even if your data is hijacked or stolen along the way, it would not be of any help to anyone since they do not have the correct keys to decrypt the data. The encryption guarantees your privacy and security.

Obfuscation In A VPN

There are two main reasons why most VPN services use obfuscation: hiding the fact that you are using a VPN is the crux of both.

Many ISPs and some governments frown upon VPNs for the simple reason that the VPN hides your activity.

The ISP might be concerned about not being able to access and sell your personal information. In contrast, some governments are worried about possible terrorist activity or insubordination being planned and hidden.

VPN Obfuscation effectively hides the fact that you are using a VPN from your ISP and, by extension, the government.

The obfuscation makes your activity appear like something it is not, confusing the algorithms and hiding your actual activity.

There may be good reasons to hide your use of a VPN from the destination server as well. For example, many people use a VPN to confuse online streaming services into believing that they are somewhere else.

The VPN lets them access a bouquet of shows or movies they would not usually have access to in their own country or region.

However, the streaming services don’t like that. They usually have good reasons for limiting their offerings in other countries.

So, they try to identify users accessing their servers through a VPN to block them.

It is relatively easy for a web server or streaming service to determine if you are using a VPN. There are entire web databases dedicated to identifying IP addresses that belong to VPN providers.

They can then block your access if they detect that you are using a VPN.

VPN Obfuscation hides the VPN server’s real identity from these streaming services, as well as other servers that might want to block VPN users.

In the server’s eyes, the VPN server is just another user accessing the service legally and from the right place.

Different systems can obfuscate this VPN connection in many ways. Some VPN providers build obfuscation into their offerings; others use a method called “Onion Over VPN,” which combines the encryption of a VPN with the untraceable aspects of Tor.

There are also services like SurfShark that hide your VPN server’s IP address from the destination host for those VPNs that don’t have the option built-in.

Obfuscation vs. Encryption – Which One Should You Use?

The answer depends on your purpose. Do you need to send and receive data that others can’t read? Encryption should be good enough.

Should you need to obscure the true meaning of what you’re sending or doing, then obfuscation is the way to go.

The question of obfuscation versus encryption is not so much a question of which is best.

It’s more about which one of these two completely different approaches to privacy provides precisely the level of protection you require at the moment.

And perhaps, like with any good VPN, you should be using both in any case.