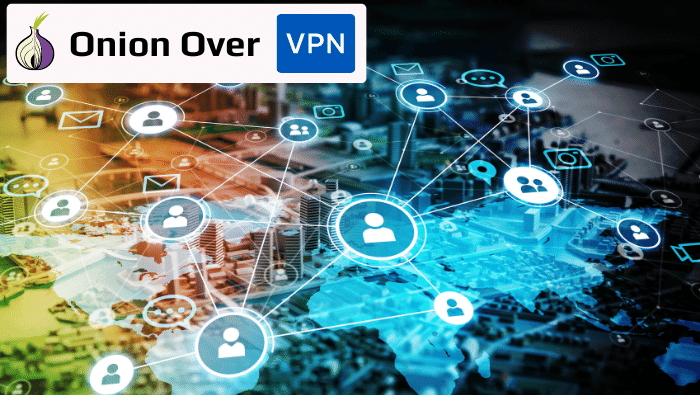 Onion over VPN, which is also known as Tor over VPN is a practice of using a VPN and Tor at the same time. This approach offers multiple privacy and security advantages over using any of these two tools alone. In this article, we’ll discuss all the information that you need to know about Onion over VPN, along with its pros and cons and the best VPNs with inbuilt onion network over VPN support.

Why Use Tor and VPN Simultaneously?

Using a Tor browser and a VPN in parallel allows you to encrypt all your data transmission, which is almost impossible to breach. As a result, it keeps you safe from notorious threats such as scammers, hackers, and cybercriminals. Other than that, you can also use a combination of different security and privacy features for another layer of security. This is necessary for journalists, political activists, people in regions with heavy internet restrictions, and people working with sensitive data.

Using any browser is completely legal as long as you’re not involved in any illegal activity, and Tor is no exception.

How to use a VPN with Tor Browser?

Anyone can use a VPN and Onion router as standalone services. However, both of these privacy solutions come with their own benefits and downsides. In order to get the best of both worlds, you can combine them both by using the Onion over VPN approach. You don’t need to go through any complicated learning curve to use a VPN technology with the Tor network.

There are hundreds of different VPN services available in the market, and choosing the right option can be a challenging task. We have compiled a list of factors that you must consider while selecting a reliable VPN for more secure and private onion networking.

One of the most important factors while choosing a VPN is to ensure that it supports all the major platforms such as iOS, Android, macOS, and windows. It’ll allow you to enjoy Tor over VPN seamlessly on any of your preferred devices.

It’s important not to ignore user-friendliness because you don’t want to spend hours understanding the functionality of a VPN. The product you choose must be simple and easy to use, especially while using it with the Tor browser.

The VPN you choose must come with all the necessary privacy features such as multi-logins, DNS leak protection, 256-bit encryption, OpenVPN protocol, and internet Kill switch. These features allow you to perform all the tasks such as torrenting, streaming, etc. on the Tor browser safely.

Considering the server speed of the VPN is also very important. There is nothing more frustrating than waiting for a long time for a video to stream, download to complete, or a website to load.

Pro Tip: Most VPNs offer a free trial period. Make sure that you utilize it to test all these factors before actually buying your subscription.

How Does Onion Over VPN Work?

Onion over VPN or Tor over VPN combines the encryption capabilities of your VPN between the server and your device. It also extends the intermediaries greatly between your device and the server by adding different Tor relays between the network request and the VPN server.

First, you connect to your VPN’s server that makes your connection private with encryption. Then, your request goes through at least three different relays in order to reach the final destination. This way, it’ll be almost impossible to trace back the source of the connection, especially if your VPN uses a no-log policy.

Traffic Flow and Encryption of Tor Over VPN

Your outbound data transmission works in the following manner while using Onion over VPN.

Pros and Cons of Using VPN with Tor

Connecting to a VPN isn’t a requirement to use the Tor network, but it offers more safety and privacy. Here are some most significant benefits of using a VPN with Tor.

Is Tor Over VPN Safe?

All VPNs aren’t created equal, and they also don’t offer the exact same features. You need to ensure that the VPN you choose offers a no-logs policy. Otherwise, all the user privacy claims will be invalidated. Onion network is fairly safe to use, but the biggest downside of this approach is that it’s community-driven. It means anyone who wants can set up a node, and any hacker with a Tor node can potentially spy on you.

The best part of using Onion over VPN is that the privacy that it offers is based on two different as well as separate entities. On top of that, the encryption that VPN offers also makes it impossible for hackers to read or use the information even if there’s a data breach. It’s also impossible for your internet service provider to tell whether you’re using Tor browser or not if you’re connected to a VPN.

The best VPNs with Inbuilt Tor Over VPN Support

You can find many VPNs available in the market that come with built-in Onion over VPN support. It means you won’t need to download and install Tor browser on your device to set up Onion over VPN. Connecting to a Tor server by using a VPN server will do the job. You can buy the following VPN subscriptions that offer Tor over VPN service:

However, using the built-in Onion over VPN comes with its own advantages and disadvantages. The biggest advantage is that you won’t need to download multiple solutions to use the Onion over VPN approach that sometimes can be very difficult. On the other hand, it allows the VPN provider to monitor your data transmission hypothetically before it’s actually encrypted. Again, it’s important to choose the VPN solution that comes with a zero-logs policy.

Using the inbuilt Onion over VPN service, you won’t be able to use the Tor browser’s features such as tracker and script blocking. Moreover, websites will have the capability to determine your identity by using their identifiers such as cookies if you opt for a normal browser.

VPN Over Onion vs. Onion Over VPN

VPN Over Onion is an alternative to Onion Over VPN that inverts the order of flow by swapping VPN and Tor. This approach comes with its own pros and cons, even if it appears to be very similar at first glance. Here’s a list of important points that we have compiled for you to understand VPN Over Onion network.

In general, VPN over Tor is a lot more difficult to set up as compared to onion over VPN and serves different purposes.

If you want to keep your online data transmission private and secure, then using Onion over VPN is the best approach. Using Tor for the right reasons is completely legal and using a VPN with this browser adds another layer of security. It enhances your online privacy and allows you to protect your data from identity thieves, hackers, and other prying eyes.