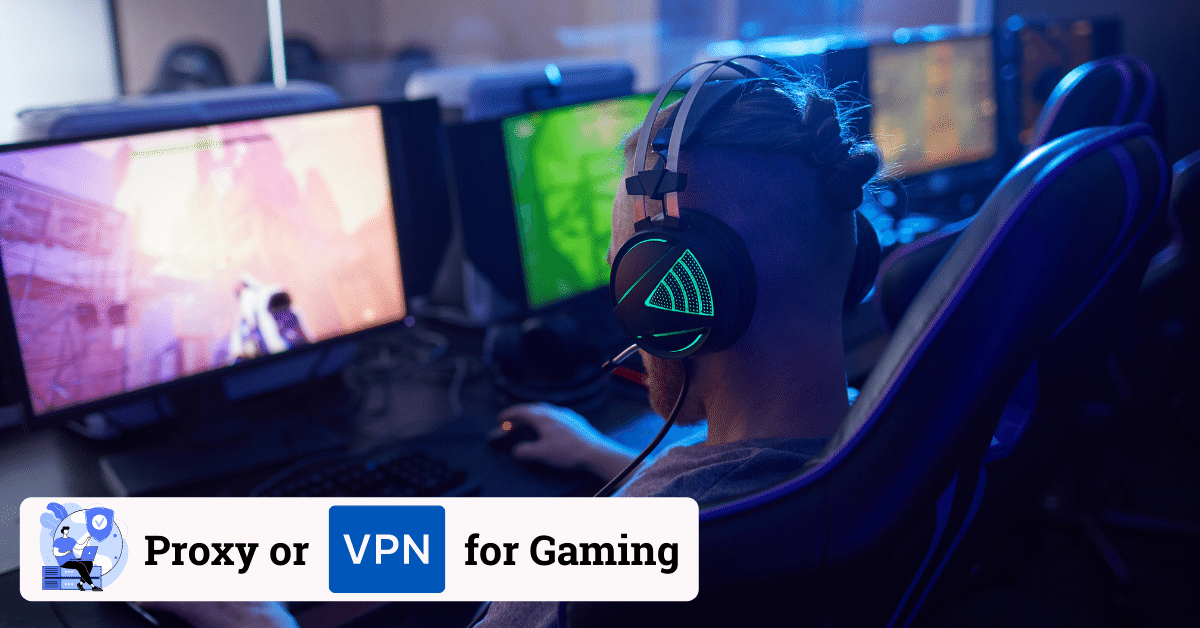 There are few things more critical for us gamers than having a lower ping: it improves response times, helps us play competitive matches, and makes dungeons or raids smoother!  A proxy and a VPN can enhance latency, but what is better for gaming, a proxy or a VPN?

VPNs are better for gaming. A proxy is faster than a VPN because it does not encrypt any data, but it is less secure. A VPN is safer because it encrypts all data, and it can exceed the speed of a proxy due to the higher volume of servers and options to choose a location close to the game server.

As gamers, we need the lowest latency possible to perform at our best. For this reason, you must understand the differences between proxies and VPNs because it will go a long way to enhance your gameplay.

Proxy Or VPN: What Is Better For Gaming?

One of the most crucial differences between a proxy and a VPN is encryption. A proxy does not encrypt any of your data, whereas a VPN encrypts all your data.  It may seem insignificant in terms of gaming, but you’ll want to keep your account information, passwords, and valuable in-game skins safe from potential hackers.

For this reason, proxies can be faster than VPNs because the data doesn’t need to be encrypted. They only redirect traffic from a single program or browser, application-by-application. Thus, proxies excel at tasks that require an uninterrupted and fast network connection, like gaming.

VPNs work on the operating system level rather than app-by-app like a proxy, and they can be slower than proxies because they encrypt your gaming data.  However, VPNs have the potential to be much faster because they have servers all over the world, allowing you to pick a server location nearest to the gaming server.

A public proxy server may struggle to provide even a single megabit per second (although private proxy servers are faster), but some VPNs offer speeds of up to 50 Mbps. While VPN encryption may add a few milliseconds to latency, it isn’t apparent unless you’re a professional gamer or top-tier streamer.

Both proxy servers and VPNs might slow down your gaming,  depending on how many people use these services. Fortunately, a VPN includes a large number of servers, allowing you to switch to a new one if latency becomes an issue. Most proxies lack the support, configuration choices, and infrastructure VPNs provide.

What Are The Best Proxies For Gaming?

If you have your gaming heart set on the proxy route, you’ll find these two gaming proxies most useful.

Smartproxy is a home proxy service that offers dynamic IP addresses for all of your gaming needs. Smartproxy provides both residential and data center proxies. Its pool of over 40 million household IPs is sourced from desktop and mobile devices and shared among all users.

While this might be a drawback because you risk getting flagged Ips, the provider’s rapid rotation strategy assures that its proxies do not get blocked. Smartproxy sets bandwidth restrictions for plans but lets you operate an unlimited number of concurrent threads.

One of the most appealing features of Smartproxy is that every price plan gives you access to the entire proxy pool, and your membership fees depend on the amount of data you utilize. Although it only supports HTTP/HTTPS protocols, the dashboard is straightforward to use, allowing for risk-free integration into online gaming sites.

RSocks offers residential, data center, and mobile IPs. You can choose to share your list of over 3 million proxies with other people or keep some for yourself. Additionally, the proxy service supports all of the standard protocols, including HTTP, HTTPS, and SOCKS5.

One of the most pleasing aspects of the service is that there are no bandwidth limits on any of their plans. You can keep using the proxies as long as the plan is active. RSocks also allows customers to operate up to 500 concurrent threads on several of the plans.

The service automatically refreshes its list of proxies; some update every 5 minutes, while others update hourly or every two hours. Depending on your plan, you’ll receive several new proxies after each update. However, you don’t have the flexibility to rotate the proxies from the dashboard manually.

What Are The Best VPNs For Gaming?

If a gaming VPN sounds more appealing to you, these two are among the best on the market.

When it comes to gaming VPNs, ExpressVPN’s performance comfortably ranks it in the top three compared to other VPN services. It has impressive speeds so that you won’t notice any lag, and it comes with specialized router VPN software, so you can escape throttling and be safe even on consoles that don’t support VPNs natively.

Express’s MediaStreamer Smart DNS utility will let you change locations on your PlayStation or Xbox to access geo-blocked material; however, it does not offer encryption.

All of your linked devices will be able to connect to over 160 server sites in 94 countries with no bandwidth restrictions. ExpressVPN is also a safe choice, with encrypted connections and a no-logging policy.

NordVPN has a long history in the VPN industry, and they’ve shown themselves to be an excellent gaming VPN. Because you’ll be able to choose from a network of over 5,000 servers in 59 countries.; meaning that no matter your location, you’ll be able to connect to the internet using your standard internet line.

NordVPN has the industry-standard encryption and zero-logging policy, but it also has Double VPN IP masking. This service effectively changes your IP address twice, making it more difficult to track.

However, if you want a static IP through its network, you can do so as well. Enable the VPN Killswitch and run the DNS Leak Test to avoid sensitive data breaches.

Proxies and VPNs are very similar in functionality, but their features differ considerably. Proxies are less secure but can be faster than VPNs, while VPNs can be slower but are more secure, although their volume of servers allows for the potential to be faster than proxies.