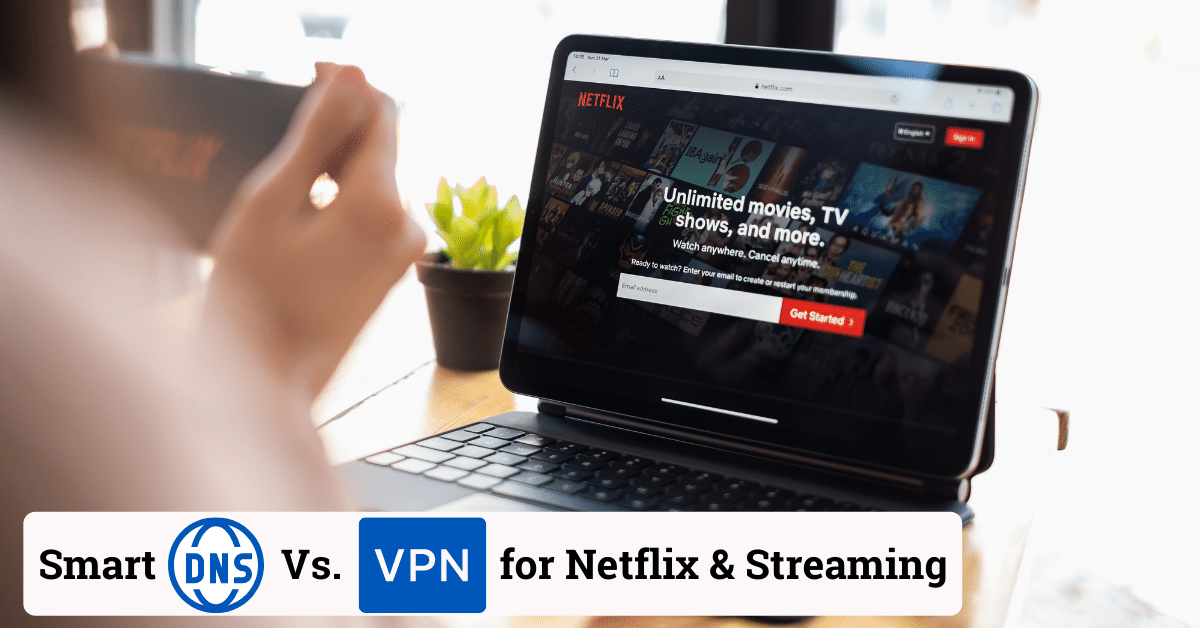 The grass is always greener on the other side. For most streamers, it seems to be true as well. But what’s better for streaming content from platforms like Netflix, Hulu, Disney+, and others – Smart DNS or VPN? Here’s TL;DR.

Let’s dive in a bit deeper and see the differences and similarities between the two.

What is Smart DNS?

Smart DNS is a technology that was developed in 2012 that doesn’t change your IP address but simply redirects your DNS queries and that helps you access geo-restricted content on websites or streaming platforms, for example.

VPN providers offer this service in addition to their VPNs and recommend it mainly for TVs that don’t support VPNs. Apart from TVs, you can use Smart DNS on nearly any device.

It will change the DNS address on your device from your local ones to DNS servers based elsewhere that are provided by the Smart DNS provider.

A VPN, on the other hand, will change your IP address but will also encrypt your internet traffic for a much more private and secure connection. It’s a more comprehensive solution that will enable you to both access geo-restricted content and give you more security and privacy.

There are thousands of VPN providers on the market but only a handful are recommended by most insiders. A VPN doesn’t exclude Smart DNS and vice versa. You can have both as they have their place in your system.

What’s the Difference Between Smart DNS and a VPN?

There are many differences between Smart DNS and a VPN. First and foremost, a Smart DNS won’t encrypt or hide your IP address. From the security standpoint, that’s not good.

A VPN does encrypt all the data that goes through remote servers and masks your real IP address and gives you a new one based on the server you’re connected to and that can be almost anywhere in the world.

If you want to look like you’re located in Argentina, for example, simply connect to a VPN server in that country if it’s available with your provider.

If you aren’t using a VPN, you’re exposing your IP address that can reveal a lot about you. It’s fairly easy for people and organizations to see what you’re doing online and to link that back to your IP address, which is unique to you.

Every time you visit a website or use software that requires an internet connection, your IP address will be linked to that data request. So, not only can third parties intercept this data on the route, but the site that you’re requesting data from will be able to identify you, too.

Speed is very important for most users as no one likes to look at buffering icons and screens. We already mentioned that Smart DNS is considerably faster than even the fastest VPN server as there’s much less information that needs to be transmitted.

Most VPNs, at least the major ones, aren’t slow by any means. They can slow down the connection by a small margin though that the majority of people won’t even notice.

READ NEXT: How to Watch Netflix Japan

The issue with torrenting is that anyone who’s in the same swarm (all peers and seeds), can see your IP address that can be used to identify you. And, although you can torrent with a Smart DNS, the fact that it doesn’t hide your IP address should be concerning and we don’t recommend it.

Both VPN and Smart DNS are complicated to use but with a VPN, you still need to install the app or client and somewhat configure it. With a Smart DNS, you just need to change the DNS values and you’re all set. There’s no turning on or off, no settings, etc.

What’s Similar Between Smart DNS and a VPN?

Both VPN and Smart DNS can be used successfully for streaming content from Netflix and other streaming platforms such as Amazon Prime Video, Hulu, ESPN, BBC, ITV, and others.

If you’re comparing VPN and Smart DNS then you already know that you can access libraries from other countries that have more content than your own.

People from outside the US can also bypass geo-restrictions and access Hulu, Netflix USA, ESPN, etc. Those streaming platforms are off-limits without VPN or Smart DNS.

By virtually changing their location, people from the US can also get cheaper prices for said platforms as well. NBA fans will appreciate this fact the most as they can save hundreds of dollars by getting NBA League Pass that way.

Unblocking geo-restricted websites is arguably the main purpose for using a Smart DNS. The whole system isn’t useful for almost any other purpose as it doesn’t protect your privacy, or provide any support other than helping you look like you’re somewhere else, and there isn’t much you can do with that other than to bypass geo-restrictions.

What’s the Difference Between Smart DNS and Proxy?

Unlike proxies, Smart DNS is much simpler as it conveys only one piece of information and that’s the DNS queries that give information on where you’re located. On the flip side, proxies route all the information through the remote server.

That takes considerably longer and typically slows down the connection.

Because Smart DNS wasn’t made to protect your information in the first place, it’s even worse at protecting your privacy than proxies are. That’s why you’re still better off using another system if you want to hide your information. For example, a VPN.

READ ALSO: When And How To Use Smart DNS

Every server that stands between you and your content slows things down. This is true of even the fastest VPNs because nothing is faster than a direct connection where you don’t need to process things, to begin with.

It doesn’t, however, give you any protection as your IP address is out in the open and your traffic isn’t protected. If you only need to access geo-restricted streaming content and don’t care much for privacy or security, Smart DNS is the way to go.

For everything else, a VPN from one of the most well-known providers is the way to go, plus, you generally get Smart DNS for free, included in your VPN subscription.

Our choice of five of the best Smart DNS Services.

SmartyDNS is a combination of VPN and SmartDNS services. They allow for a 3-day free trial of their services so you can test them out and see whether or not they meet your needs before you start using them. They also offer a 30-day money-back guarantee, which provides some extra support on top of their basic services.

However, SmartyDNS only bundles its services together, so you’ll pay more for this than some other providers.

KeepSolid is made by the creators of VPN Unlimited. KeepSolid SmartDNS is a non-VPN provider that allows you to use it without installing anything and on unlimited devices you own. After registration, this company offers a 7-day free trial, which is long enough for many vacations if you want to access the content at home then. That alone makes this service worth looking at.

If you know you want to use a SmartDNS system long-term, the 10-year plan makes KeepSolid SmartDNS one of the most cost-effective options on the market. To some extent, that also makes this company the best smart DNS.

ExpressVPN bundles a Smart DNS known as MediaStreamer with its VPN offering. Enabling this is usually as simple as following the instructions for your device above and using the DNS addresses they offer.

As one of the better VPNs, this is a great choice if you also want to maintain your privacy while you’re online.

The company offers a 30-day money-back guarantee, which isn’t quite as good as a free trial but can be used for some vacations.

Unlocator offers both Smart DNS and VPN benefits to customers. What sets them apart from most other options is their competitive pricing plans. Unlocator’s VPN bundle is, of course, more expensive than just the SmartDNS.

Smart DNS Proxy delivers both VPN and Smart DNS elements. Unlike some of their competitors, they also offer SmartDNS at the same time you’re running a VPN. This does remove some of the speed benefits of only using a Smart DNS.

The company offers a 14-day free trial. More than enough to test the service or to get it while you’re on vacation. Apart from monthly and bi-annual plans, they also have a lifetime subscription available for a flat fee, which is the single most cost-effective option.