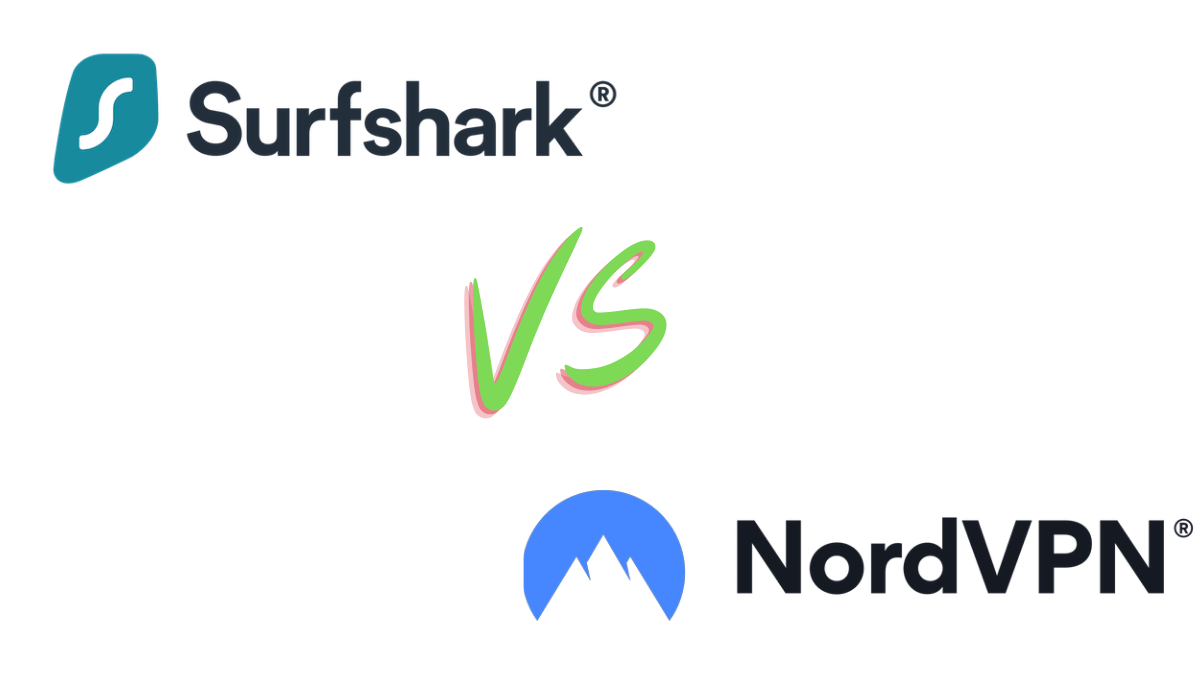 Choosing a VPN can be overwhelming with so many options on the market. There is a lot to consider, from device compatibility to price, and that’s just scratching the surface. It can take hours of research to narrow the field, and then you have to whittle down the finalists to one winner.

We dug into two of our favorite VPN providers because they remain popular. NordVPN and Surfshark repeatedly appear on top VPN providers lists, so it’s only natural to compare them.

Since 2012, NordVPN has made a name as a reliable VPN provider with fast speeds and an impressive network of servers. Surfshark is a newer provider that burst onto the scene in 2018 with a fast-growing network and unlimited connections.

Both providers offer several perks on top of the security and privacy of using a VPN. We took a look at everything from jurisdictions and transparency to advanced features and pricing. Let’s dig in and compare two of the best VPNs available in an epic showdown of NordVPN vs Surfshark!

When it comes to VPNs, jurisdiction matters because you don’t want to choose a provider that is subject to unfavorable privacy laws. In terms of jurisdiction, both Surfshark and NordVPN have favorable jurisdictions.

Surfshark falls under the British Virgin Islands, which currently manages all in-country affairs and doesn’t require data retention. Of note, Surfshark does retain limited information, but none of it identifies users.

NordVPN works out of Panama, another country with strong privacy laws and no requirements to save or share your data. The provider doesn’t keep any logs.

Transparency may be more important with a VPN than nearly any service you work with today. The more information you have about a company, including any third-party audits, can increase that provider’s trust factor.

NordVPN had a 2018 third-party audit to support its no-logs policy. In 2020, they ordered a second audit with a wider scope to reinforce a commitment to privacy and security.

Surfshark also underwent a third-party audit in 2018, which revealed a strong security setup with minimal concerns, and none related to browser extensions.

One benefit of using a VPN is using it across all of your devices. Native apps for each platform you use make life easier for you because you only need to download and install them. However, not all VPNs offer cross-platform software, which means you would need to manually set up some devices.

VPN browser extensions provide privacy and security by encrypting your data when you shop online or surf the web. You can also turn the extension on or off, depending on your needs and preferences. NordVPN and Surfshark offer browser extensions for Chrome and Firefox.

NordVPN allows six simultaneous connections per account. Though the provider offers apps for multiple devices, if you have more than six, you won’t be able to sign on with all of them at once.

Not all VPNs offer the same advanced features, so comparing these features can help you make the best decisions for your household. Some features may not be as critical for you as others, so weigh your options carefully.

In terms of Surfshark’s advanced offerings, you can expect some of the same enhancements, including a strict no-logs policy. The company maintains that it doesn’t monitor, track, or store your information or activities.

The server network is another consideration you can’t overlook when comparing NordVPN vs Surfshark. Choosing a VPN with quality servers is important, but you also want one with enough servers to handle the number of clients they serve.

NordVPN has one of the larger networks available with servers located all over the world. The provider boasts more than 5,000 servers in more than 59 countries. NordVPN’s network has more than 2,200 servers in North America and over 2,000 in Europe. You can also access servers in Africa, the Middle East, India, Asia, and the Pacific.

The provider’s smart algorithm matches you with the best VPN server based on location, loads, or requirements you select. NordVPN also has some specialty servers should you need them.

Surfshark may not have as many servers as NordVPN, but it still commands a large network of more than 1,700 servers across 63 countries. All servers in Europe, the Americas, the Middle East, Africa, Asia, and the Pacific, have private DNS and operate with no-logs.

There are no bandwidth limits, and every server is capable of Camouflage Mode. Ever Surfshark server is specialized to handle P2P.

Streaming is another common reason people choose to use VPNs. Not only does a VPN improve speeds to eliminate buffering, but it can also unblock geo-restricted content. If you plan to use your VPN to improve and expand streaming services, you probably want to know how they stack up.

Surfshark does a commendable job of unblocking content on Netflix, Amazon Prime, HBO Go, BBC iPlayer, and Hulu. If you live in the U.S. and desperately want to catch some Doctor Who episodes, Surfshark has you covered.

NordVPN also unblocks the primary streaming networks, plus Eleven Sports. It’s noted to deliver some of the fastest speeds available, and it managed to access more geo-restricted content on the streaming networks than Surfshark.

Torrenting (P2P file sharing) is often overlooked when researching VPNs, but not all VPNs allow it. NordVPN and Surfshark both have servers capable of handling P2P traffic, and they don’t maintain activity logs, which provides you extra privacy.

NordVPN has dedicated servers to handle torrenting, in Canada and the Netherlands. Consequently, if you plan to participate in P2P file sharing, you need to connect to one of them. It’s easy to do by setting the parameter for server type when you connect. However, some users recently noted issues with torrenting when using NordVPN.

Surfshark provides users an opportunity to torrent using any of their servers because they can all handle P2P file sharing. You don’t have to seek out special servers, and you don’t have to compromise on speed.

NordVPN agrees. The provider claims to offer a 30-day free trial to give their product a try. Conveniently, they also offer a 30-day money-back guarantee. If you look at the fine print, you see that you have to pay upfront for the service, try it for thirty days, and then cancel for a refund.

Surfshark doesn’t pretend to offer a free trial; they have one. However, you can only use the seven-day free trial on mobile devices. You do not need to give your credit card information to get started. They also offer a 30-day money-back guarantee if you choose to purchase their product.

Unfortunately, neither of these VPN providers allows you to connect to their servers for nothing. Even though they both offer money-back guarantees, they charge something, so it’s only natural to compare their payment plans.

You can comb through thousands of reviews and never reach the conciseness of a Reddit post, even when it comes to VPNs. It seems that people have plenty to say about the effectiveness, performance, and capabilities of most VPN services, including NordVPN and Surfshark.

NordVPN has a massive following with several mentions on Reddit. Several users report they use it for streaming and torrenting with no complaints about speed. A few commenters note that the performance fell off in recent years.

A handful of recent posts on the community page mention difficulty finding a decent connection, mostly regarding torrenting. One poster reported issues with constantly connecting to the same server no matter what they try.

Surfshark may not have a dedicated following on Reddit yet, but there is plenty of conversation about the VPN provider. There are several negative comments from 2019 and before, but more recent comments suggest an uptick in opinions on the provider.

One Reddit user notes that Surfshark is “on the cheap side” and that they could watch Netflix libraries from the US, UK, and Japan without difficulty. Another user noted that they “switched from Cyberghost to Surfshark, and I couldn’t be happier.” They also reported an excellent price plan and access to a lot of geo-blocked streaming.

Though NordVPN initially had loads of support, it sounds like things may be cooling off a bit in recent months. On the other hand, Surfshark seems to have overcome a rocky start with Reddit users by improving its shortcomings.

The Verdict: Surfshark vs NordVPN

Choosing a VPN is a personal choice heavily influenced by how you use the internet. Consider what’s most important to you, including speeds and pricing.

If you simply need an additional security and privacy level for internet use, it may not matter much. However, if you hope to unblock geo-restricted content or torrent, you may want to look a little closer.

NordVPN and Surfshark share a lot of similar features. They were even in four of the twelve domains we evaluated (jurisdiction and privacy laws, native apps, browser extensions, and advanced features). Here’s a recap on how the rest of the comparison broke out.

Though NordVPN remains one of the most popular providers available, it appears to us that Surfshark narrowed the divide over the last year. Though both providers leave something to be desired, Surfshark is an impressively affordable VPN provider with a lot to offer users.

We would love to see a few tweaks to Surfshark’s streaming services, primarily the ability to unblock more services. That said, Surfshark is affordable, accommodates torrenting on all of its servers, and allows unlimited simultaneous connections.