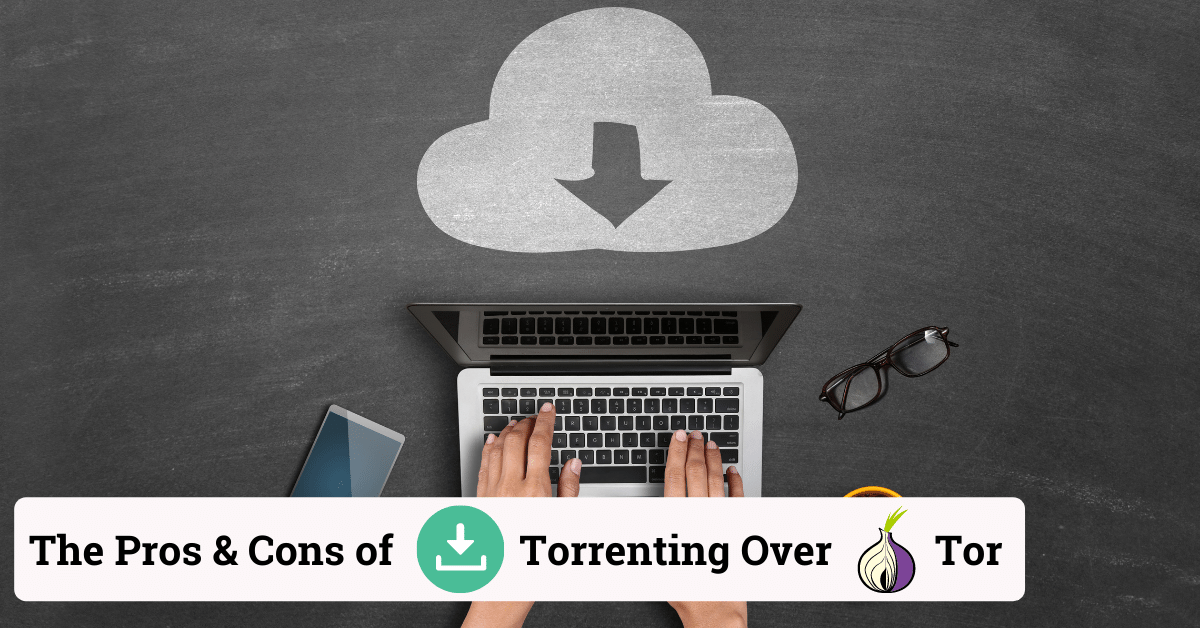 *Neither cybersynchs.com nor its partners are supporting illegal torrenting. Torrents should be used only for legal file sharing and downloading.

Torrenting has become a popular way to access media like movies, TV shows, music, and software for free over the internet. The primary concern many have is that private details, like your IP address, can easily leak to other torrent users, and your ISP keeps track of your torrenting activities. Tor could solve this, but what are the pros and cons of torrenting over Tor?

Tor is a free, secure network that hides your IP address and personal information from others, letting you remain anonymous while torrenting. However, torrenting over Tor is unbearably slow, and the very nature of torrenting can still allow your identity and activity to leak despite using Tor.

Using Tor for torrenting may seem like a brilliant idea; it’s like having a free VPN to keep you safe from prying eyes. And there are definite advantages to torrenting over the Tor network. But there are just as many, if not more, disadvantages. There are ways around the weaknesses for the most part, but you must know about all the cons before you attempt to torrent over Tor.

Can You Torrent Over Tor?

Though it is similar to a VPN, Tor has a few distinct differences. These differences can affect your torrenting ability positively or negatively.

First, Tor is not corporate-owned. It is a network of servers that belong to individuals. These servers are made available to the Tor network free of charge. Your connection is tunneled from one server to the next in a random sequence, re-encrypting your data and changing your IP address with each hop so that there’s no way to trace your internet activity back to you.

Tor makes use of the SOCKS5 protocol, creating SOCKS proxies for you to tunnel your data through. Any software configured to use SOCKS proxies can work over the Tor network. This includes most torrenting clients, including uTorrent and QBittorrent. This means that it is possible to configure those or a few other torrenting clients to connect over Tor rather than directly.

The Pros Of Torrenting Over Tor

You may think of a few reasons to try to torrent over the Tor network. These pros are persuasive and make a lot of sense, but be careful not to accept these reasons as final until you’ve familiarized yourself with the cons as well. Things can quickly take a wrong turn if you don’t clearly understand all the positives and negatives. The pros of torrenting over Tor are:

As you connect to the internet, you are given a public IP address by your ISP. This IP address is visible to everyone on the internet, and it can be linked directly back to you. This means that people can track your activity or even launch a DDoS attack against you. When you torrent, you are connected with other users’ computers to download and seed, making it even easier to track you.

As you connect to the Tor network, the Tor client encrypts your connection and connects you to the first of a sequence of random proxies. The proxy replaces your IP address with its own, adds another layer of encryption, and passes you along to the next proxy, where the process is repeated. This way, your IP address is untraceable by the time you’re connected to the torrent network.

2. Hiding Activity From Your ISP And Regulators

Torrenting in itself is completely ok. Companies are legally distributing their software through torrents these days. This saves them bandwidth and server overhead. But the most popular use of torrents happens to be media files, whether it’s videos, music, software, or just about anything else. People download media where some of them have to be paid for.

The Cons Of Torrenting Over Tor

Despite the seeming great benefits of using Tor for torrenting, there are also significant disadvantages that could have dire consequences if you’re not aware of them. The cons of torrenting over Tor include:

1. Torrenting Is Slow, Tor Is Even Slower

This cannot be emphasized enough. Tor is slow. Slower than a snail having a lazy stroll. This is caused by all the encryption and decryption happening on every proxy server and the distance your connection has to travel between proxies. Torrenting is already a relatively slow method of downloading; doing it over Tor makes it so slow that there’s almost no point to it anymore.

2. Tor Was Not Designed To Handle Torrents

Tor was created to allow people complete anonymity on the internet, enable free speech, and avoid censorship. It’s a valuable tool for journalists, whistleblowers, and people stuck in countries with authoritarian regimes. The servers, managed by volunteers, were never designed to handle the kind of bandwidth that it takes to download the Complete 9 Seasons of The Office.

The Tor network has around 700 exit relays around the world. These servers remove the final layer of encryption and connect you to the destination server or torrent network. These 700 exit relays serve about 3 million people at any given time. Given these numbers, torrenting over Tor is not only pointless, but even to attempt it seems incredibly selfish.

3. The Torrent Client Could Still Cause An IP Address Leak

Configuring your torrent client to work over Tor is possible, but some clients have a weakness – they use the Tor proxies to connect to the torrent tracker. However, peer connections (your connection to other torrent users) are still unencrypted. This means your IP address is leaked directly to users connected to the same torrent, some of whom could be regulators or corporate snoops.

UDP is the faster one of the internet’s transport protocols and the more unreliable one. Torrents make extensive use of UDP to improve speeds, but Tor does not support UDP at all. This means that there’s a chance that any UDP connections will happen outside of Tor regardless of how well they are set up, leading to data leaks, which is what you’re trying to avoid in the first place.

Though you can configure many torrent clients to avoid all UDP-reliant protocols, this could lead to the torrent client losing connection and failing. According to web reviews, it is simply not worth the effort. UDP is as much a part of torrenting as peers and seeders are.

It is possible to torrent over Tor, and there are potential pros to doing so. Just like it is possible to tie your shoes using paperclips to keep from touching the shoestrings. The pros are there, but the cons far outweigh them. Instead of torrenting over Tor, paying the money for a reliable, torrent-friendly VPN is a much better idea. You can even get one with Tor built-in if you wish.