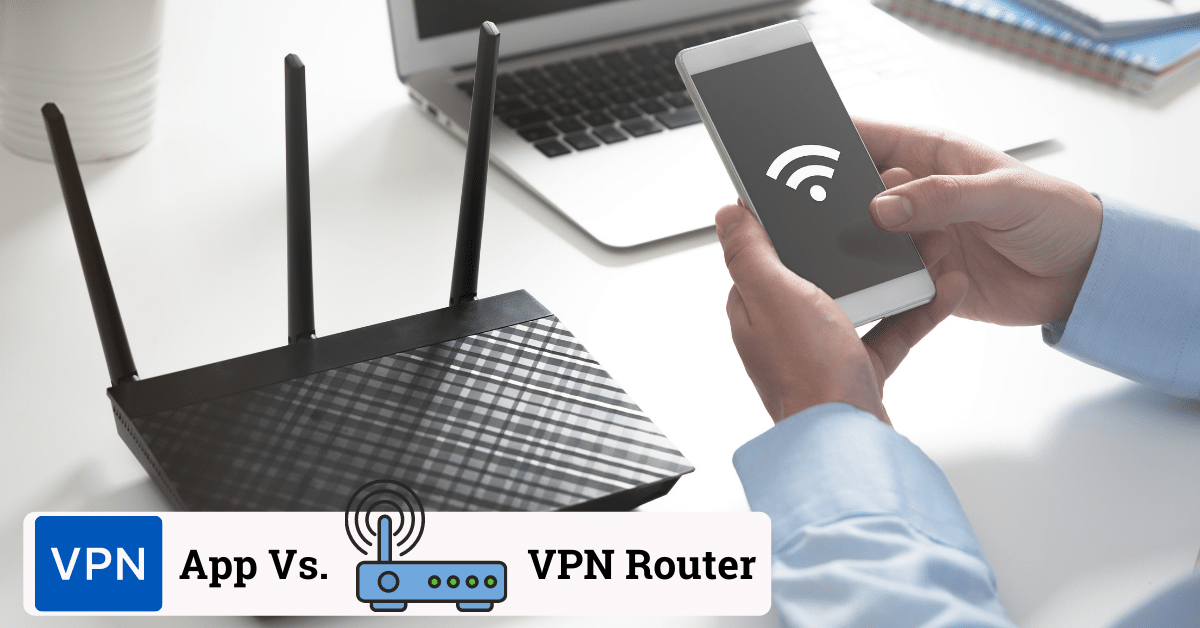 Choosing between a VPN app or a VPN router can be difficult. Do you want to configure the router yourself or buy an expensive pre-configured one? Or do you simply want to download the app, turn on the auto-connect, and be done with it?

VPN router vs. VPN app is an ongoing debate. Read on to find out all the pros and cons, when to use a router, and when an app. But first, here’s our short verdict:

If you’re ready to configure your router or have the money to buy a pre-configured one, you’re better off using VPN via a router as it will blanket-protect your whole household. On the other hand, if you only have a few devices to protect and they can have a VPN app installed, you’re better off downloading and installing an app.

Once you configure your existing router (if it supports VPNs), there’s no need to do anything else. All the devices that are connected to your configured WiFi will be protected. You don’t have to download and install VPN apps or clients, although you can.

If you’re accessing WiFi outside of your home connection, having a VPN app installed would be a wise choice. Still, knowing that you don’t have to use an app when you’re connected to your WiFi does feel good and, frankly, liberating.

This is less than ideal. Also, to even configure the VPN, you’ll either have to have the know-how or follow detailed instructions. You can always buy a pre-configured router as well, but they can cost a pretty penny, and those on a tight budget won’t appreciate the added cost.

VPN routers generally only support one protocol like WireGuard, or the OpenVPN protocol more often.

VPN providers have made their apps very intuitive and easy to change settings and preferences. Everything is just a tap or click away, and the apps themselves are available on all major operating systems.

Although routers are set it and forget it, on apps, you can also choose the auto-connect feature that will make it extremely easy to use them as well. You won’t have to manually connect to a VPN server every time you connect to the internet or a public WiFi.

One of the best things is that they are extremely cheap if you choose the multi-year plan and they usually have a 30-day money-back guarantee. If something isn’t up to snuff, ask for a refund and move to another service.

You’re also not constrained to only one app download. You can get the app for as many devices as you want and use the VPN simultaneously on 5+ devices. Often even unlimited devices, depending on the company.

READ ALSO: Is It Worth To Pay For A VPN? (Free Vs. Paid VPN)

Having a VPN app installed can be extremely handy but it can also drain your battery, depending on the VPN provider. Some of them also take up a good few resources from your phone’s or computer’s processor.

Also, on TVs that don’t run Android, you won’t be able to install a VPN. In that case, having it on your router is the better choice.

All in all, having a VPN installed on your devices isn’t a bad move, not by a long shot. In the end, it’s just different and can be complementary to your router setup.

Read more in our complete guide: The 8 Advantages And 5 Disadvantages of a VPN

When to use VPN Router

People who want to protect their whole household or office, for example, whether they have one device or many, can easily do it with a pre-configured VPN router. Granted, they are considerably more expensive than normal routers and take the hassle away from setting up the VPN yourself.

Especially if you aren’t tech-savvy and don’t want to lose the whole day going through guides or YouTube videos.

Bu using a VPN router, you simply configure everything once and don’t have to worry about opening a VPN app or connecting to a VPN. Set it and forget it, as long as your devices are connected to the same WiFi. You can and should check every few weeks if everything is still set up correctly, but that’s it.

Unless you need to switch to different servers all the time or change protocols, you should be perfectly fine using a VPN router.

READ NEXT: How To Watch NBA League Pass With A VPN (Bypass Blackouts)

When to use VPN Apps

If you only have one or a handful of devices that need to be protected by a VPN, you’re arguably better off downloading and using a VPN app from one of the reputable VPN providers.

They typically let you connect from 5 to unlimited devices simultaneously and offer plenty of settings that can be changed at a moment’s notice. You can easily change the protocol, turn on or off the kill switch, change the server to a different country, or find a server that supports P2P, streaming, and torrenting.

There’s no need to log into your router and manually configure settings like these. Everything is there in the menu. Changing servers when you please is especially handy when you want to stream content that’s geo-restricted. You simply connect to a server in a country of your choice and enjoy the content that’s otherwise off-limits.

When you’re on the go and need to connect to a hotel or coffee shop WiFi, your app will protect you from wannabe hackers.

Should you be using VPN apps or use router-level protection? It’s probably best to use both. That’s what I’m doing. I use a pre-configured VPN router that protects my whole home. I mainly got it because my TV can’t have a VPN app installed.

I then discovered that having this setup is very simple, and you don’t have to ever think about it. When I’m not at home, and I need to connect to WiFi, I use a VPN app that auto-connects when it detects an unknown network.

And, although VPN over router does require an initial setup, ultimately, it’s easier to use if you don’t need to change servers or protocols all the time, of course.