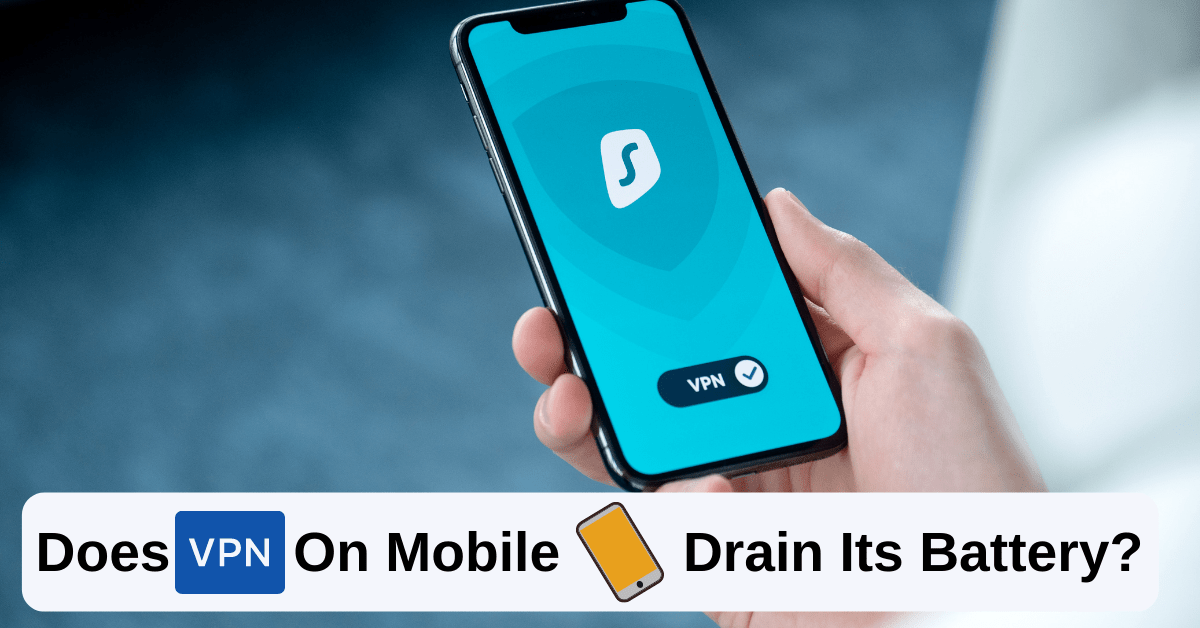 VPNs can do wonders to bolster our security and privacy while we explore the net. They work well on mobile devices, but how taxing are they on battery life?

I use a VPN daily on my mobile, and I’ve discovered some fascinating conclusions. So, does a VPN on a mobile device drain battery life?

Even though VPNs cause a drain on your mobile’s battery life, the good news is that you can take viable steps to manage it.

Let’s explore how a VPN affects your mobile, what it does, and what you can do to lessen battery consumption.

VPNs are a popular pick for individuals and businesses looking to improve their security and privacy.

They are suitable for almost any device, including our mobile devices, but what effect do they have on your battery life? In truth, the VPN service, age of your mobile, cellular network, and internet activity affect battery drain.

Encryption refers to what your VPN does to make you invisible. It will encrypt any data you send from your device until its destination.

Once at the destination, it will decrypt it, obtain new information, and encrypt it again before sending it back to your device.

Once it reaches your device, the VPN decrypts it so that your device can receive the new data.

This back-and-forth happens via a VPN tunnel and demands a lot from a mobile device.

They differ for each VPN service, much like motor vehicle manufacturers assemble their parts differently.

When a VPN has a complex encryption process, it requires the CPU (Central Processing Unit, or the “brain”) of the mobile device to work harder to achieve a result.

When it has to think harder and jump through more hoops, it will expend more energy and consume more battery life.

The effect of a VPN is similar to that of an anti-virus. An anti-virus program like Norton is among the best on the market, and they achieve that by covering more areas of a computer’s system.

However, this will make the computer a little or a lot slower, depending on the age of the computer.

A VPN Will Drain An Older Device More Quickly

Consequently, older mobile devices will experience more battery drain, roughly 10 to 20 percent or more, because their hardware and software are not as effective at keeping up with modern technology.

They lack the hardware acceleration that new phones have, meaning they must work harder to achieve the same result.

For example, a passenger vehicle traveling uphill will expend more power to reach the top than a sportscar because the parts are less powerful.

So, a modern phone with more potent hardware will handle complicated calculations and tasks more efficiently, consuming around 5 to 10 percent more battery life than usual, depending on what encryption the VPN uses.

Older phones, however, may use up to 20 percent or more battery life.

Surprisingly, the signal strength shared between your mobile device and cellular network affects how much battery life a VPN consumes.

When a mobile device has difficulty finding a signal, it will strengthen its receiver, like turning up the volume when you can’t hear music playing.

An active VPN increases the strain on the mobile device as it tries to please the VPN’s demands while searching for a signal at maximum capacity.

As a result, the closer you are to a cell tower, the less battery life a VPN service will cost your mobile device.

When you have an active VPN running in the background of your mobile device without you performing any internet-related tasks, it will consume little to no battery life.

However, any other applications you have that send or receive data over the internet (something that provides life updates) will have their data encrypted and decrypted by the VPN, costing battery life.

Of course, this also means that the more you use an active VPN for browsing, watching videos, etc., the quicker the battery life will disappear because it has to do continuous encryption, decryption, and calculations.

It’s like a snowball effect; the more data travels through the VPN, the more the mobile phone has to process, consuming more battery life.

Furthermore, remember that it will naturally take more battery life while keeping the VPN connection alive, so it doesn’t drop.

Consequently, it’s natural for a mobile device to experience 3 to 5 percent more battery usage per hour with minimal use.

A VPN service does not abide by these rules because it must be active at all times to operate effectively.

How Can You Maximize Battery Life With A VPN?

Even though VPNs must remain active for you to use them, there are a few things you can consider to save on battery life.

Firstly, if you use a VPN to watch videos or browse the internet, consider turning it off when you aren’t doing those things. Switching it back on doesn’t require much effort, and you may very well save 10 to 15 percent battery life.

If you must have your VPN constantly running, keep an eye on your background applications.

Those that continuously send and receive data via the internet will go through your VPN, costing you valuable battery life. Consider switching off these apps when they’re not in use.

Otherwise, if security is not a concern, then switch it off when you do not need it for a specific task, like playing an offline game or when your mobile is in sleep mode.

Lastly, a power bank can do wonders to relieve the issue, primarily if you work away from any place where you won’t be able to charge your mobile phone, or you need your VPN constantly working.