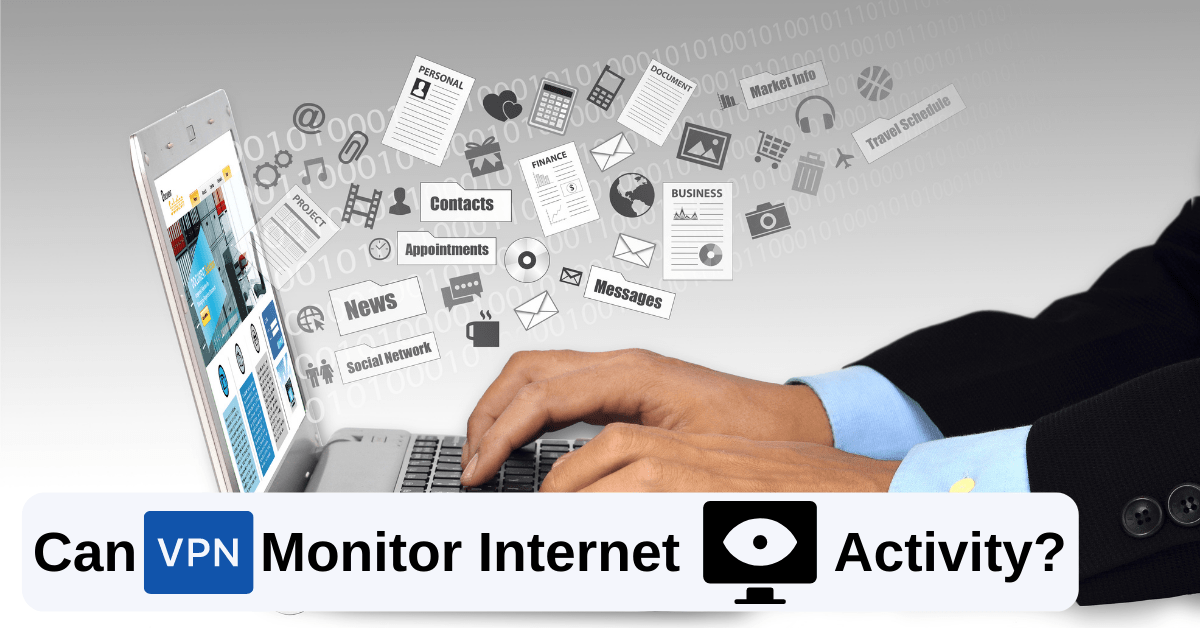 VPNs have become digital household tools to help us improve our privacy and give us peace of mind.

However, aren’t we simply placing the privacy of our data in the hands of another, hoping they are safer?

If I’ve wrestled with this conundrum with my own VPNs and found an interesting answer! So, can VPNs monitor internet activity?

A VPN can monitor internet activity because they assume the role of an ISP. Their privacy policy dictates what they can do with data. VPNs without “no-logging” policies, especially free VPNs, can sell your data or have contracts with 3rd parties to hand over your internet activity records.

To what extent are VPNs privy to your browsing habits, digital fingerprints, and downloads?

Let’s explore how much of your data VPNs have access to, what to be wary of, and what happens to the data that VPNs collect.

If you weren’t aware, your ISP (Internet Service Provider) has the power to track all your internet activity; from the websites you visit, the phrases you use, the videos you watch, and the files you download.

When you access the internet using a VPN, the VPN will assume the role of the ISP. Your ISP can see data, but not its contents, location, or destination.

These truths will also apply to VPN companies with strict “no-logging” policies. They will only be able to view that encrypted traveling to a server, but not where it’s coming from nor its destination.

However, it’s still possible to use these traffic patterns to associate you with certain activities despite data encryption.

Thus, a VPN can monitor internet activity. However, what they do with that information depends on their privacy policies.

While some VPN companies swear up and down on their “no-logging” policies, it’s not unheard of for VPN companies to collect small increments of users’ data and sell them to third-party companies or hand them over to authorities.

In its simplest form, VPN companies enable you to play a game of pretending. You pretend that you’re in a different physical location than the one you’re actually at, acting almost like a digital teleportation device.

However, here’s where things start getting interesting: Apps, people, or VPN companies who monitor and track internet activity do not rely solely on monitoring location.

They utilize an impressive array of additional tools to gain an understanding of the bigger picture, such as:

Are VPN Companies Above The Law?

It’s crucial that you read their privacy policy carefully to establish what you allow them to do with your personal information and data.

They may also have contracts with ISPs or government agencies, meaning they can access all available data. In some countries, authorities even have the power to force VPN companies to hand over user information, history, and other internet activity habits.

As such, improving your anonymity involves you doing some research into the terms & conditions, privacy policies, and the country of origin of your VPN service.

You can usually find a brief bio on each VPN’s website stating where their base of operations exists in the world. Consider doing research into these countries to determine their laws on personal data.

It happens because your patterns or habits are similar regardless of whether you use a VPN or not.

For example, searching for a specific item, food, flight, or beverage within your vicinity, but your VPN places you in a different country would create a red flag.

That’s how these people can track someone despite using a VPN.

What Do VPN Providers Do With Your Data?

According to 2016 research done by Australia’s Commonwealth Scientific and Industrial Research Organisation (CSIRO), 283 Android VPN applications do not provide the level of protection that customers require.

According to reports, at least one tracking library was integrated into the code of 67 percent of the VPN applications evaluated in this investigation to track users’ online behavior.

In truth, if a VPN is tracking your activity, it may intend to sell the collected data to third parties for hyper-target advertising purposes.

Free VPN services need to generate money, and many do it by bombarding customers with pop-up adverts. Not only are ads inconvenient, but they can also slow down your internet connection.

Some free VPN services use ad-serving trackers to monitor your online activities.

VPN services may also keep track of your browsing habits as an extra layer of security. As such, when there is suspicious or different activity on your account, they may temporarily suspend your account to investigate the anomaly.

For this reason, some VPNs strictly prohibit account sharing between friends and family.

Since VPNs need to encrypt and decrypt the data you send or receive, it’s fitting that they have access to all that information.

Top VPN companies have strict “no-logging” policies that don’t keep records of users’ habits, while companies that need to make money, usually free ones, more than likely collect and sell users’ data to stay afloat and make a profit.