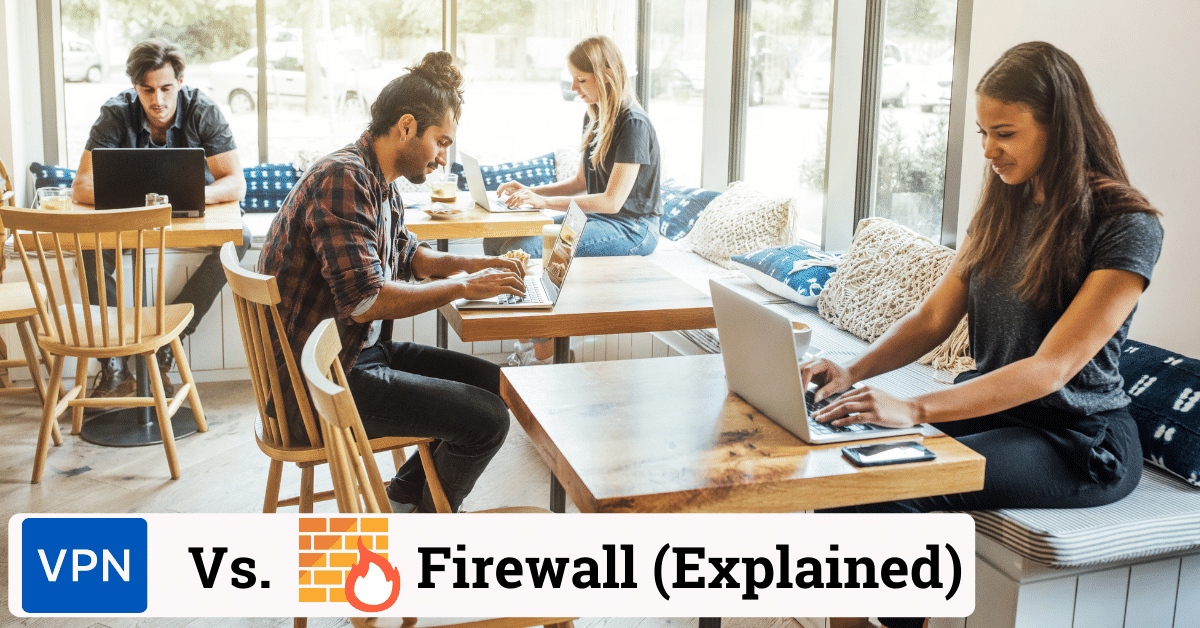 It seems that we’re bombarded with VPN offers these days. But, since you probably already have a firewall installed on your device, you might be wondering if you also need a VPN.

The main difference between a firewall and a VPN is that a firewall will block attacks on your network or computer while a VPN will encrypt your connection and hide your real IP address, which means your true location and online activities will stay hidden. Both VPN and firewall keep your devices secure but use different techniques.

We have all the answers for you. Keep on reading to find out what’s the difference between VPNs and firewalls and which one you really need.

What is a VPN?

VPNs or virtual private networks are used by tens or even hundreds of millions of people each day to protect their privacy and keep them secure while accessing the internet.

A VPN is a tunnel through which encrypted internet traffic flows between your device and a VPN server. Encryption prohibits anyone from accessing your data, i.e., your location, what ISP you’re using, and, of course, what you’re doing online.

For that reason, savvy individuals and companies are using VPNs to connect to the network and use the internet without concerns that prying individuals, organizations, companies, and even governments will know exactly what they’re doing online.

Millions of people worldwide are using VPNs as an inexpensive way to bypass geo-restrictions and to protect themselves from cyberattacks.

By using VPNs, people also drastically improve their privacy and security, break through bandwidth throttling by their ISPs, and government internet censorship.

Not to mention that businesses, universities, and students use it to securely and freely access all the information and resources they want and need.

What is a firewall?

A firewall is like a security guard that’s watching incoming and outgoing traffic between your computer and a network. It’s the first line of defense that blocks certain content, apps, or sites from harming your computer.

Modern computers come with firewalls pre-installed on Windows and macOS. However, smartphones aren’t as vulnerable as PCs, so they typically don’t have firewalls. But you can certainly get one if you feel that you need it.

There are many types of firewalls. But in this context, we’ll only be talking about software and hardware firewalls.

A software firewall is the one that comes with your Windows, for example, and it controls all of your internet access and behaviors of apps and programs on your computer.

A hardware firewall is a device separate from your computer and is placed between it and the internet to monitor internet traffic. It’s arguably harder to configure than an app or software firewall.

What do VPNs do that firewalls cannot do?

VPNs provide a private and secure network and protect your outgoing traffic by changing your IP address. Firewalls can’t do that, and they only protect the incoming traffic by blocking ports.

A VPN effectively hides your online activity so that you can access any websites you want, even the ones that could potentially be harmful. Luckily, many VPNs on the market today have adblockers and features that protect you from malware and malicious websites as well.

People often confuse or mix up the two, but VPNs and firewalls are very much different, and a good VPN can do heaps more than a firewall can.

Apart from adding more privacy and security, VPNs are excellent for bypassing online censorship and helping people access all of the internet from countries with restrictions, censorship, and even penalties for accessing forbidden websites.

The most well-known example is China and its Great Firewall. Yes, people use VPNs in China to bypass a nationwide firewall that restricts thousands of websites to the Chinese people.

For this reason, China is one of the top markets for VPN providers as regular people, students, universities, and businesses need them to access the internet and many restricted Western websites freely.

Have you ever tried accessing a website, but you couldn’t enter because you weren’t from that country? No? Well, you probably live in the US then. But, many American websites restrict their websites to people outside the US and Canada.

The same is true for streaming platforms like Hulu. Netflix is known for having drastically different libraries in different countries. You can’t even access them, let alone watch something if you aren’t from that country.

A good VPN will bypass all these geo-restrictions and let you access content from other countries that would otherwise be off-limits to you.

RELATED: Best Cheap VPNs for Netflix (That Work in 2021)

Torrenting and P2P are still alive and well, and people turn to them because they don’t want to pay for ten different streaming platforms. Frankly, it’s almost worse than having cable.

I’m paying for four streaming platforms (Netflix, Amazon, Apple TV, and YouTube Premium), and still, some excellent TV shows elude me and I can’t watch them without getting yet another streaming service.

However, I can’t be bothered with torrenting. At the end of the day, I don’t want to muck about with files to watch a movie anymore. Those days are long gone for me.

Still, many people do torrent, and they need to use a VPN to stay safe from prying eyes.

In general, a firewall won’t affect your VPN. It never happened to us in all the years of testing VPNs and we never heard anyone else with this issue. However, if a firewall affects your VPN and doesn’t get along together, try installing another VPN first.

There are free VPNs that are reliable and that will let you see if the VPN is the problem or your firewall.

You can also add an exclusion to your firewall (ports 500 and 4500 UDP, and port 1723 for TCP). Another thing you can try is adding your VPN to the list of apps and programs that are allowed to go through your firewall.

There are many more things you can try to fix this issue and you can find them in this helpful article.

READ ALSO: VPN vs Proxy: what are the differences?

Can a VPN get around firewalls?

We constantly bump into firewalls. We find them at our workplaces, universities, government institutions, and even on a country level in the form of the Great Firewall of China.

Institutions took it into their hands to allow or not allow what we can read, watch, or simply browse. If you ask me, that’s not a good look for them and it makes people outright hate them every time they encounter a firewall that restricts access.

VPNs can easily get around firewalls as they were designed to do specifically that. To be more precise, VPNs don’t bypass firewalls, they tunnel through them by deceiving the firewall into believing that you’re at a different location, that of the remote server.

When you connect to a remote server in your own country or a completely different and distant one, you not only trick the firewall. You also trick any institutions and other prying eyes into thinking you’re at a different location, location of your choice, by the way.

Not all VPNs are the same when it comes to bypass various firewalls. That’s why our website can help you find the best VPNs for privacy, gaming, streaming, torrenting, but also VPNs that are affordable yet powerful.

Do you need a firewall with a VPN?

For maximum security, a firewall is a good idea with or without a VPN. Firewalls are the first line of defense and most computers come with a built-in firewall via Windows or the macOS.

Apart from that, your home network, aka wireless router, also defends against attack to a point. There’s effectively no need for a third-party firewall when using a VPN.

But what about public and free WiFis? If you’re using public WiFi in a cafe or an airport, for example, you’re far better of with solely a VPN than solely a firewall.

A VPN will encrypt all your data and keep it private and secure from intruders that might be sifting through public WiFi traffic.

Which VPN can bypass any firewall?

VPNs that use the OpenVPN protocol can not only bypass firewalls but tunnel through them. There are plenty of VPN providers that use this highly secure protocol that’s open source and can therefore be configured for different uses.

Here are some of the VPNs that use the OpenVPN protocol:

Although inherently different, firewalls and VPNs have the same task – to keep your device secure. However, they accomplish this in different ways.

VPNs make a tunnel that hides your IP address and encrypts all data that’s going through that tunnel. A VPN won’t protect you from viruses unless they have a feature like an antivirus built-in.

Firewalls, on the other hand, watch your incoming and outgoing traffic and block viruses, and other attacks that might harm your device and thus protect your data from third parties.

Should you be using a firewall, a VPN, or both? Definitely use both as that will make your devices the most secure and private at the same time while you’ll also be able to go through firewalls that were set up to block you from entering.