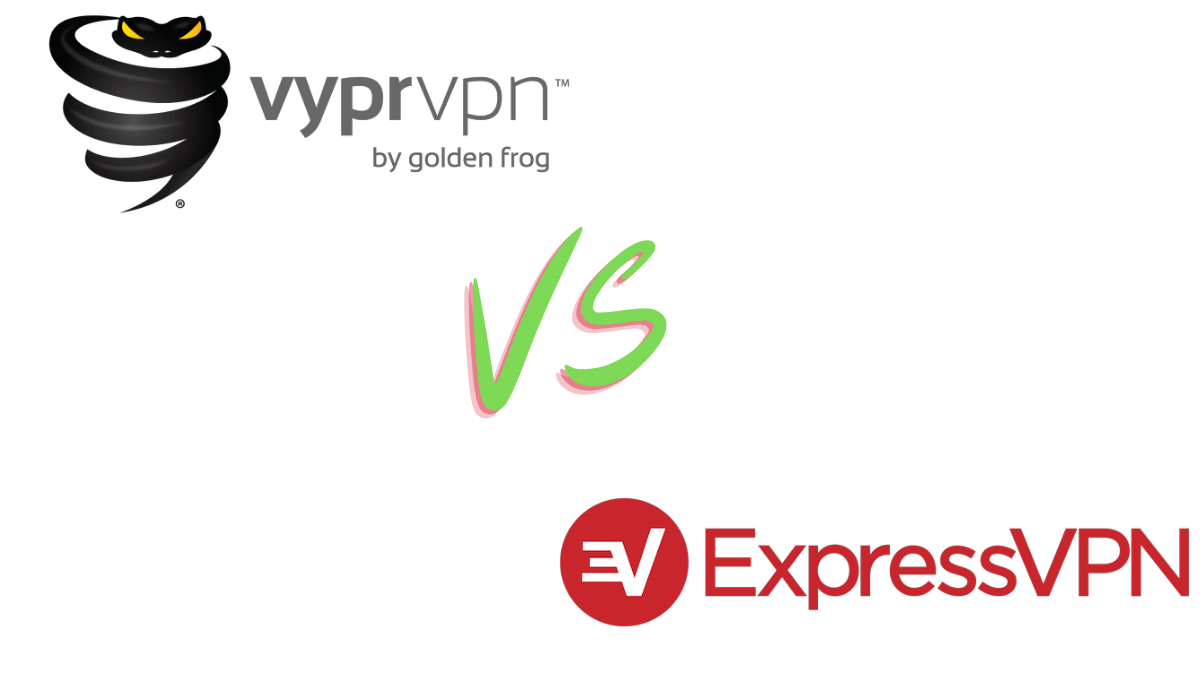 If you’re new to VPNs, finding a good provider can get downright confusing.

In this article, we’re taking a comprehensive look at two of the popular VPN providers, VyprVPN and ExpressVPN. We’ll be comparing them and breakdown their differences and critical features.

VyprVPN and ExpressVPN are two of the trusted VPNs on the market. For a relatively new market, both have been around for a while.

VyprVPN was started in 2009 by the Switzerland-based tech company Golden Frog. As soon as the VPN service was launched, it quickly became a top performer in the market. They’ve set the standard for transparency and provide an audited No Logs service, so your data is never recorded.

ExpressVPN has been around for over 11 years, and they’ve also enjoyed consistent success and growth. With over 3000 servers in 94 countries and tens of thousands of happy customers worldwide, it’s no wonder that they’re one of the top-rated VPN providers.

Both of these VPNs can give you the security and privacy you need, but neither offers double VPN as well as some other advanced features. Still, they also unlock content, allow streaming, and torrenting.

So which one should you go with? VyprVPN or ExpressVPN? Keep reading to take a look at how their features stack up against each other with ExpressVPN vs VyprVPN.

Some countries have stricter privacy laws than other countries, affecting whether your data is truly secure.

ExpressVPN’s jurisdiction is in the British Virgin Islands, which provides quite a bit of freedom when it comes to privacy. The country doesn’t have any data retention requirements, and they also have excellent privacy laws.

VyprVPN’s jurisdiction is in Switzerland. Not only does this country have impressive laws, but it doesn’t require any data to be recorded.

VyprVPN and ExpressVPN are both audited no-log VPN service providers. This ensures that your information or data is not being recorded or shared. Combined with their strong jurisdictions makes them both a solid choice for privacy and security concerns.

Third-party audits are essential to finding a VPN provider you can trust. But it’s just as crucial that the providers are transparent and share the audit results. This hasn’t been a problem for either VyprVPN or ExpressVPN.

In 2018, VyprVPN made an extraordinary move by having the security firm Leviathan conduct a thorough audit of their software and make it available to the public. This made them one of the first publicly audited VPN company and set the trend for other providers to follow suit.

ExpressVPN made a similar move in 2019 when they allowed cybersecurity firm, Cure53, to audit their software and publicly release the results.

On top of that, ExpressVPN released a questionnaire, which is available to the public, through the Center of Democracy and Technology.

The questionnaire provides ExpressVPN’s answers to questions regarding privacy, security, and technology. Some of the information includes how they protect against unauthorized access and how they respond to requests for user data.

When it comes to native app availability, ExpressVPN is a clear winner, being available on eight different platforms. They are easy to install on Windows, macOS, iOS, Android, Android TV, Linux, and Amazon Firestick. This is something that many VPN providers don’t have.

Although it has less of what ExpressVPN offers, you can still use VyprVPN on the most common systems like Windows, macOS, iOS, Android, and Android TV. For someone who wants essential perks that come with a VPN, then this should do fine.

If you use a wide range of devices and apps like Chromebook and Firestick in addition to your regular operating system, ExpressVPN is the way to go.

Whatever you choose, you can feel confident knowing that both VyprVPN and ExpressVPN offer quality apps for major platforms.

Both VPN providers are pretty well-matched when it comes to the number of simultaneous connections it can have. Each of these options gives you the ability to connect five different devices to their VPN servers.

Although you can have five connections at once, you can register an unlimited number of devices on both VPNs.

ExpressVPN is hands down the best for streaming and peer-to-peer file sharing (P2P). They are reliable for Netflix, Hulu, BBC iPlayer, Disney+, and Amazon Prime.

With ExpressVPN we were able to access to over ten international Netflix libraries, including the US, France, Japan, and Australia.

With VyprVPN we had to try a set of servers before succesfully accessing Hulu.

Both providers also allow for torrenting or peer-to-peer sharing. This is a huge plus, considering that torrenting has become different since the 2017 repeal of specific net neutrality policies.

Using a VPN that can protect your privacy and security while torrenting. Check the recommended VPN services for P2P.

Now, let’s talk about what sets these VPN providers apart. Each one has advanced features that can aid speed, security, and privacy.

Being an industry leader, it’s no surprise that VyprVPN has a lot of innovative features. Here are some of the best ones.

This is one of VyprVPN’s standout features. Some network managers can bypass your VPN and block you, but Chameleon changes all of that. The Chameleon Protocol bypasses VPN blocks by scrambling Open VPN packet metadata.

DNS is what translates web addresses into computer-readable IP addresses, so it communicates with the host. Most people rely on their ISP’s DNS server or a 3rd party DNS server for this function.

You can avoid DNS leaks through VyprVPN DNS, which is Golden Frog’s wholly-owned and operated DNS service. This feature is automatically built into the VyprVPN.

VyprVPN offers a solution for business with VyprVPN Cloud. This is a user-friendly option to run a dedicated business VPN server.

VyprVPN for Business Cloud includes own dedicated IP. This means that you can use the same IP address no matter where you are in the world, and when it comes to VPNs, this feature has its advantages.

For one, you can switch between the dedicated IP and shared IPs, depending on what you’re doing. Secondly, dedicated IPs help make online payments and avoiding CAPTCHAs easier since you’ll have one that you can use to avoid entering repetitive information.

VPNs do an excellent job of providing comparable speeds and avoiding freezes; it still happens from time to time. If your connection suddenly stops, does your information immediately become available? Not if your provider has a kill switch.

VyprVPN has this feature, and it performs great. It’s a great backup to ensure that your data is safe even if the VPN gets disconnected.

ExpressVPN has a lot of advanced features that will keep your VPN connection flexible and running smoothly.

ExpressVPN also offers a Kill Switch feature, which is officially called Network Lock. This feature automatically turns on as soon as you connect to your VPN. It even keeps you protected when your computer is closed and even when you’re not on the internet.

One of the best reasons to use a VPN is to access global content. Therefore, it can be frustrating if you can’t access something international while on local websites. That’s where split tunneling comes in. This feature allows you to be on local network and VPN connection at the same time.

Many VPNs use the Advanced Encryption Standard (AES)-256 for safeguarding their user’s information, including ExpressVPN. It’s a secure encryption method, the 256 refers to the number of possible combinations, but this system can still be decoded.

ExpressVPN doesn’t just rely on this method; it also offers additional VPN protocols that add an extra layer of protection.

These aren’t automatically included, but they’re worth adding on. The best option is the Automatic Protocol, which allows their system to decide which one to use depending on what you’re doing so you can maximize your speed and security.

The best way to decide is to try out the product, which is why free trials are great. Some VPN providers offer free trials to show their servers’ quality and value, but it’s not always an option.

VyprVPN doesn’t have a free trial; however, they do offer a 30-day money-back guarantee. If you’re not happy with their services within the first 30 days, you can cancel your account and receive a full refund.

ExpressVPN has a similar system. There is no free trial, but you will be able to get your money back within 30 days if you’re not satisfied with the level of speed and security you’re getting.

Paying upfront may not be something you want to do, but knowing that you can get a full refund should ease your mind and give you confidence in their product. It’s also good to remember that the paid VPNs offer a higher security level than free services.

These are both paid VPNs, and similar to other options, they offer a subscription-based service. You can have access to a fast, secure, and private connection for a monthly or yearly fee.

ExpressVPN is a costlier overall, but for the high-security level you get with features like TrustedServer Technology, the price is worth it. It comes down to what you want out of your VPN.

What Redditors Are Saying

What better way to decide than to go to the people who have used both? We searched Reddit to see what people were saying about VyprVPN vs ExpressVPN.

Based on what we’ve found, ExpressVPN is the clear winner. It all comes back to the speed and unblocking capabilities. Just take a look at this post from 3 years ago, where the Redditor was trying to decide between VyprVPN and ExpressVPN.

An actual review of VyprVPN from around the same time pointed out a couple of downsides that you should consider. Even after changing servers to different countries, their IP address would always end up going back to a US IP.

But that doesn’t mean that ExpressVPN hasn’t had its fair share of negative feedback. One Redditor recently took to the VPN Reviews sub to talk about his disappointment with their speed.

They said that after experiencing superior speeds for a week that their speeds were dramatically slower. Unfortunately, they said that ExpressVPN’s customer service didn’t help find a solution or answer.

Another user also said their support team was less than helpful with their one to two disconnects per day.

Still, ExpressVPN appears to be the top VPN provider, and there are plenty of people singing its praises. Just a year ago, one Redditor shared how much they love their service and have been using it since 2014! Looking at the comments, they’re not the only one who feels that way.

VyprVPN vs. ExpressVPN: Who’s the Winner?

VyprVPN and ExpressVPN both have their advantages, but is there a winner? Yes, and it’s ExpressVPN. That’s because they offer the most access to streaming services around the world, and you’ll hardly experience any issues with it.

The price is a little higher, but for the amount of content you’ll have access to and superior tech, it’s well worth it.

Even though ExpressVPN beats VyprVPN in a couple of areas, VyprVPN is still a viable option. They’re a no-log VPN that’s affordable and can stream on all your favorite platforms. If you want a straightforward option, it’s worth considering.