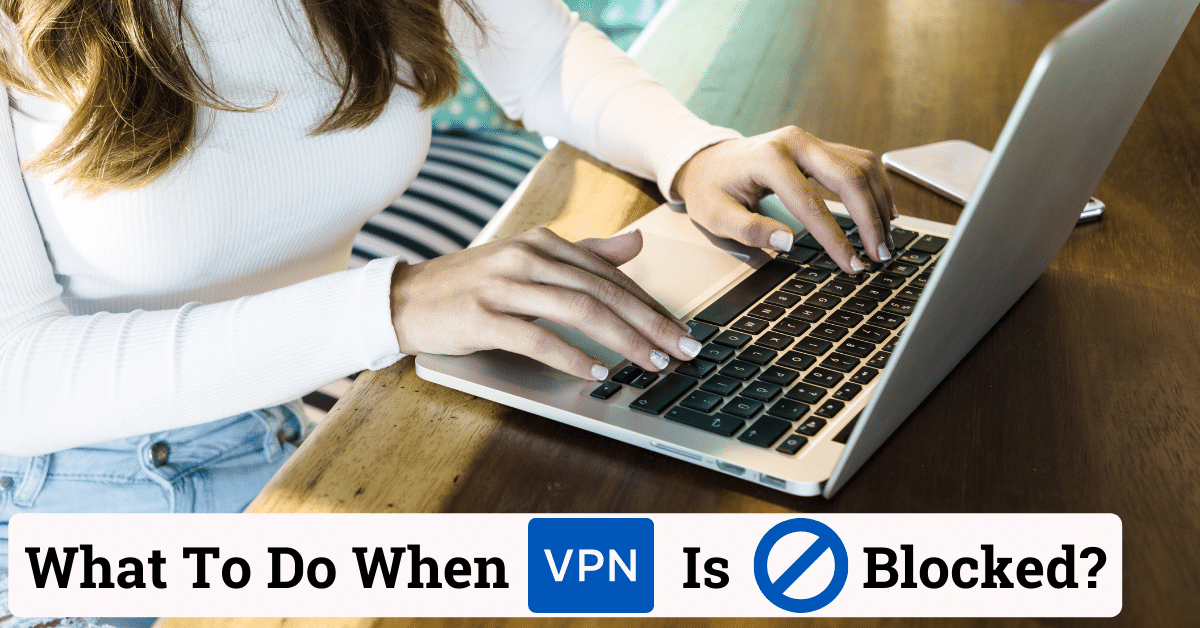 VPNs are excellent tools that provide millions of people with enhanced privacy and security. Not to mention bypassing online censorship and geo-restrictions from streaming platforms and websites.

But what do you do if your VPN gets blocked as well and you aren’t able to use it to the full extent of its capabilities?

If your VPN gets blocked, you can try one or more of the following solutions:

Let’s go into more detail about each one of these potential solutions for unblocking a VPN connection.

What To Do When A VPN Connection Gets Blocked?

The first thing to do when your VPN connection gets blocked is to reset the VPN by turning it off and then back on. Sometimes the simplest solution is the best one.

Another simple solution to try to unblock your VPN is to connect to a different server in your own country or in a completely different one. You should do this, especially if there’s a geo-restriction in place and a website or service actively restricts users from outside countries.

Geo-restrictions are commonly used by streaming services such as Netflix to prevent you from accessing libraries of other countries due to legal and contractual agreements.

Not all VPNs are the same, and some work better for certain things than others. To use the Netflix example again, the company is actively blocking most VPNs and even closing users’ accounts if they’re using a VPN to watch Netflix.

For that, and many other reasons, it’s useful to try using a different VPN, one that’s perhaps more suitable for the task ahead. If you think I’m crazy for even suggesting this, as many VPNs can cost quite a penny.

However, there are a few free VPNs that are solid, and most others have a 30 to 45-day money-back guarantee or a seven-day trial period. That way, you can test out their service without spending more money to determine why your VPN is getting blocked and if the problem is with the existing VPN that you’re using.

RELATED: Best Cheap VPNs for Netflix (That Work in 2021)

VPN protocols are generally using known default ports. That makes it easy to set up firewalls to block them and therefore block VPN connections.

For example, the OpenVPN protocol uses default ports 1194 UDP and 443 TCP. That protocol, and others, can use different ports, but you will have to change them manually.

Obfuscated servers muddy the waters and hide the fact that you’re using a VPN in the first place. Using obfuscated servers is an excellent decision when websites or institutions ban the use of VPNs in general. Netflix comes to mind again but also China.

A VPN will prevent anyone from seeing what you’re doing online, but they can still see that you’re using a VPN. By using obfuscated servers, you will change the way your data looks and make it seem like you aren’t using a VPN while, at the same time, bypassing any restrictions and staying secure and private.

VPNs can obfuscate the data by using encryption to hide your encryption as well as make it look like regular internet traffic that is stuffed with trivial information.

RELATED: NordVPN Obfuscated Servers – Everything You Need to Know

Camouflage Mode from Surfshark is basically another name for obfuscation. This feature will run automatically when you connect to Surfshark’s servers that use the OpenVPN protocol.

Stealth VPN is yet another name for obfuscation that will also disguise your VPN traffic as normal internet traffic. Many VPNs use Stealth Mode.

Use Other Obfuscation Method

Apart from the ones mentioned above, there are several more obfuscation protocols out there. These include:

Use A Dedicated IP Address

VPNs typically use shared IP addresses to connect you to the internet. That’s perfectly fine in most situations and even preferred for torrenting as you want to share the IP address with many other people.

On the contrary, you can opt for a dedicated IP address that is unique to you, and that isn’t on an institutional radar.

The downside is that dedicated IP addresses usually cost additional money on top of your VPN subscription. However, you can go back and forth between a shared and a dedicated IP as you wish.

Changing to a different protocol is straightforward and works similarly for most VPNs and their apps regardless of the operating system.

It’s equally easy to block known IP addresses or IP address ranges that belong to VPN providers. Governments or websites can also ban access to all foreign IP addresses. Of course, you can connect to a server in any country you want to bypass this blockage.

Deep packet inspection (DPI) inspects in detail the information being sent over a network and may block it accordingly. DPI can be used for internet censorship in, for instance, China. But it can also be used for troubleshooting, analyzing network usage, checking for malicious code, etc.

Why Do VPNs Get Blocked?

You might be wondering why VPNs get blocked in the first place. Aren’t they designed to bypass all sorts of firewalls and other restrictions?

Yes, but institutions and governments have caught up to VPNs and they’re aware that a ton of people are using them to bypass these arbitrary restrictions to freely access the web. Nevertheless, here are the main reasons why VPNs get blocked.

Streaming services are the biggest culprits of geo-restrictions. As these mega-companies sign licensing agreements with copyright holders, they have to adhere to policies that prohibit them from offering certain movies, TV shows, live events, and sports in some countries.

This isn’t a new practice but it is annoying, especially if you live outside the US and want to access the content that is exclusive to the country. Travelers from the US that go abroad will also be very familiar with the issue.

For this reason, Netflix and others have inspired millions of people to use VPN services adding a nice chunk of change to the VPN providers’ bottom line.

However, now they’ve started outright blocking VPNs and giving headaches to a lot of people that now can’t even use them to bypass geo-restrictions. Still, we showed you plenty of things to try if your VPN gets blocked as well.

Censorship is still very strong in a good few countries worldwide. China is the obvious example but there are some others that may or may not surprise you. In general, China, North Korea, Iran, Belarus, Turkmenistan, UAE, Syria, Qatar, and Thailand are the worst countries for internet censorship.

Most other countries have also restricted or banned torrenting, while others may also ban or restrict VPNs, social media, pornography, and political media.

Governments and institutions have a vested interest to block VPNs so that people can’t access online content freely. If you’ve encountered a blocked VPN, there are more than a couple of solutions that you can try.

You can start by resetting your VPN, switching to a different server in your own or in a different country, or even switching VPN providers altogether. If any of those don’t seem to fix the block, try changing ports, or using obfuscated servers that trick institutions into thinking that you aren’t even using a VPN.

You can also upgrade to a dedicated IP address that is unique to you and isn’t associated with any VPN. Lastly, you can try changing the security protocol from your VPNs app.