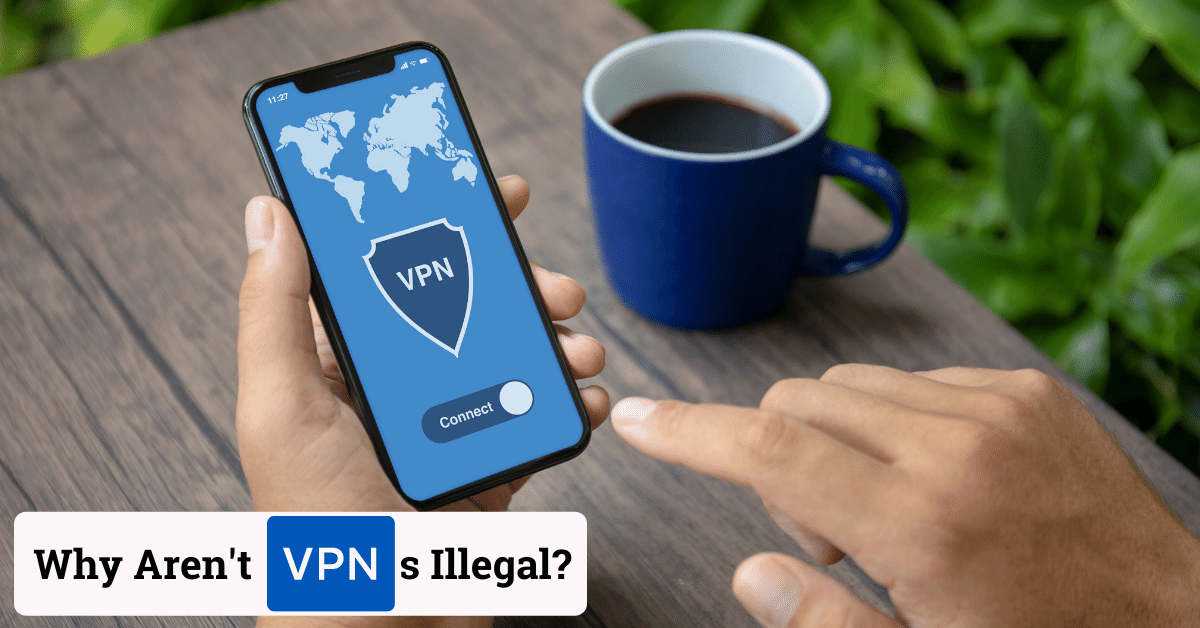 If your IP has ever been restricted from accessing a certain part of the world, you’ve most likely circumvented it using a VPN. Some people use VPNs for watching Netflix, while others require them for work. They can easily be used for criminal activity, so why aren’t VPNs illegal?

VPNs are technological tools that are not be prohibited since they have no direct link to unlawful actions. Bolt cutters, for example, can be used in burglaries but were not made unlawfully. The way VPNs are used dictates their legality rather than their created nature.

There are various nuances to the legality of VPNs and why they are considered more of a threat in certain countries while openly accepted in others. If you’re planning on traveling, you may want to stick around for this!

The legality of VPNs is determined by how they are used, not by the devices themselves. When you investigate how and where the VPN is used, you’ll run into legal issues. If something is unlawful without a VPN, it will certainly be illegal with one (i.e., downloading copyrighted materials).

Using a virtual private network is legal in the United States. Many firms utilize them to provide secure access to the corporate network to their employees. In the United States, consumer VPN providers abound, with corporations as large and respected as Google providing VPN services.

Some VPNs encrypt your internet connection, hide your IP address, and prevent others from tracking your virtual location, such as the government or internet service providers (ISPs). Despite their negative consequences, VPNs are still legal in most countries.

As a result, a few governments, like China, Russia, Iraq, and North Korea, have made VPNs illegal by limiting or banning them outright. Prohibiting VPNs is an attempt at preventing Illegal file-sharing, hacking, the possession of sensitive files or records, and cyberstalking.

There are presently no laws prohibiting or regulating the use of VPNs in the United States or Canada. Many other countries, like the United Kingdom, Australia, and Europe, have made VPNs lawful.

Why Are VPNs Banned In Some Countries?

Using a VPN allows you to bypass all the most advanced attempts to govern and restrict the internet. That is why authoritarian governments all over the world are attempting to block or prohibit VPNs. However, because such legislation is unpopular and difficult to execute, most governments avoid outright prohibitions.

Rather than outright banning VPNs, several nations try to restrict access to well-known VPN service providers. While challenging, it is possible if governments are prepared to commit resources to the effort.

Countries prohibit VPNs so that they can prevent individuals from stealing and selling copyrighted content and hacking into networks to obtain personal information and account information.

Additionally, using a VPN to bypass a website’s or app’s technical security measures may be illegal in some jurisdictions, as well as a violation of the VPN’s and website’s Terms of Service. Therefore, be cautious and mindful before signing up with a VPN provider; read the Terms of Service and make sure you agree with them.

The Terms will very clearly state that you are accountable for any illegal action you engage in.  The VPN provider may also say that it will notify law authorities if it suspects criminal activities. Also, check the terms and conditions of any service you’re using, such as Netflix, ensuring that you’re not violating them while using a VPN.

Why Do Some People Use VPNs?

There are many valid reasons why individuals might use one, including watching video on streaming services that aren’t accessible in their location and safeguarding oneself when using public Wi-Fi.

VPNs are extensively used by individuals and enterprises seeking an extra layer of online privacy protection. Because public Wi-Fi networks don’t always encrypt their connections, cybercriminals with the Wi-Fi password can listen in on your online activities.

However, if you use public Wi-Fi and then connect to a personal VPN that encrypts data, much of your online activity will be hidden from watchful eyes. Even though most VPNs claim to keep no records, law enforcement can demand information, and there is precedence for VPN companies revealing user data to officials when asked.

What Is Illegal To Do In The U.S. With A VPN?

While utilizing a VPN is not intrinsically illegal in the United States, although many acts carried out with one may be.

Using VPNs for purposes like hacking is a serious crime, as is stalking and cyberbullying; they fall under crimes of harassment or theft and affect others’ personal safety.

Engaging In Transactions On The Dark Web Marketplaces

Dark web marketplaces are often accessed using Tor, although VPNs are becoming more popular as well. Purchasing illegal goods or services on the underground market is unlawful with or without a VPN.

Although copyright laws are seldom enforced against individual people who steal information, it is still illegal—and your Internet service provider may take action against you (ISP).

VPNs are generally approved or strictly controlled, yet their threat is determined by how they are utilized. In truth, there is no legitimate legal basis for banning VPNs because they are merely tools.