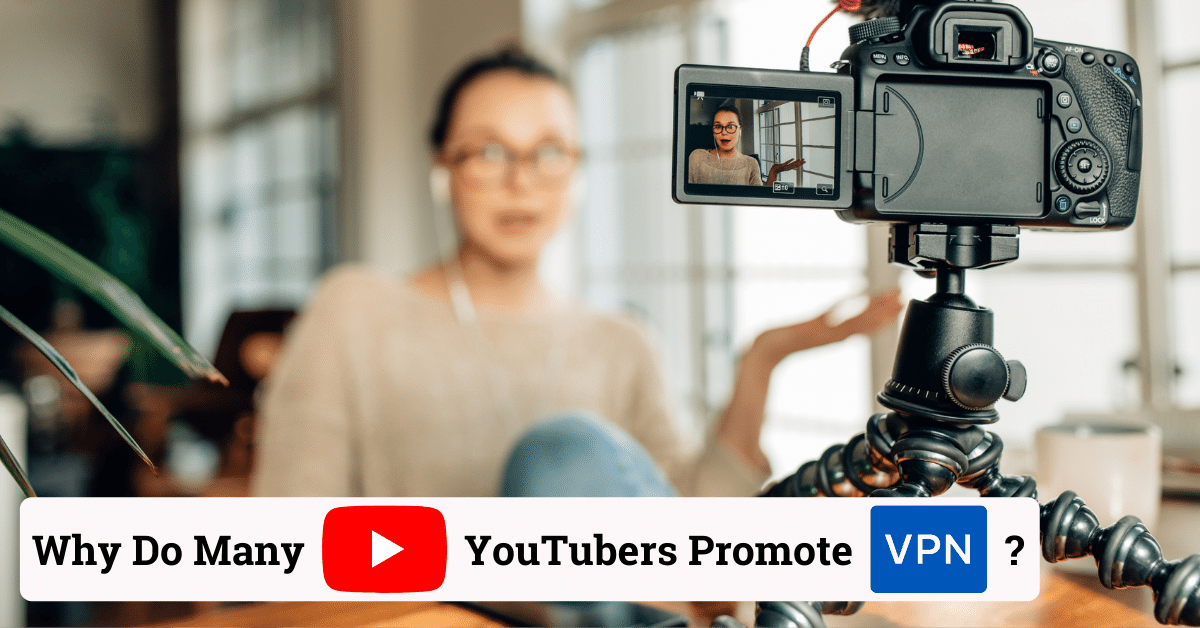 Many influential YouTubers constantly promote products, more or less, related to their show, like NordVPN and other VPNs.

So, let’s explore why so many YouTubers promote NordVPN and other VPNs.

The new ad policy has made YouTubers look for different forms of income, such as brand advertising. This has allowed NordVPN and others to entice YouTubers with an influencer program. The program allows creators to earn money for promoting the products of different companies.

Some YouTube creators are influential people who have a profession many people wish they could have as a career.

However, the job is now much more complicated than it appears due to channel demonetization.

Below I go through channel demonetization and why YouTubers advocate VPN services like NordVPNs through their channel.

Why Do Many YouTubers Promote VPNs?

A YouTuber may choose to promote different companies on their channel, such as VPN services, for different reasons.

It all boils down to the content producer and the sort of corporation that wants to pay for product promotion, among other things.

As a result, they are denied revenue, and their earnings from the video-hosting platform are lowered.

These are some of the following rules they have to obey below.

Why Demonetization Is A Problem For YouTubers?

Some of these rules make sense, and you can definitely agree they sound fair.

However, in the real world, these lines can become blurry. Therefore, some of these rules can either help or ruin a content creator channel.

There have been several complaints from different creators that they have been targeted or demonetized mistakenly.

For example, such an incident occurred by popular YouTube creator Mr. Beast who made a video that got mistakenly demonetized.

The video Mr. Beast created was a compilation of all the money he had donated to people, about one million dollars worth.

Unfortunately, he immediately lost revenue when his video was flagged through the demonization algorithm.

The only way he could stop the video from underperforming was by voicing his opinion on other platforms like Twitter. Mr. Beast is a well-known figure in the field of YouTube video content creators.

He has almost 100 million subscribers and constantly earns more than seven figures. So imagine what it’ll be like for smaller and medium-sized YouTube channels that can’t voice their opinions.

The algorithm can flag any YouTuber, and all it takes is one video to start the demonetization process of a YouTube channel.

This is a significant concern for smaller and medium-size content creators. Imagine your income can be stripped away from you because of an algorithm making a mistake.

How YouTubers Use Brand Advertising

As I previously stated, if you are a member of the YouTube Partner Program, you must follow the demonetization rules.

As a result, YouTubers avoid losing money by aligning themselves with different companies and making additional money by advertising their products on their channel.

There are a lot of corporations who know that paying YouTubers money to promote their product might be a worthwhile investment.

These corporations attract YouTubers by persuading them to join their own partner programs for brand advertising. Each program has different incentives and benefits for these content creators.

If you put your money into anything, you anticipate a return on your investment, just as advertising a product is the same thing.

How many individuals you can convert to buy your product or know about your company is how you earn a profitable return on advertising.

NordVPN was first skeptical about the usefulness of the video platform (YouTube) in terms of online conversions, but after collaborating with Google.

As a result, the two firms developed a highly successful YouTube campaign that resulted in more conversions daily than ever seen before.

YouTube is where people go to learn about a significant number of things.

Therefore, YouTube was a perfect site for NordVPN to display its brand. Since consumers actively explored concerns about their Internet privacy by actively looking for related subjects.

As time went on, NordVPN performed successfully advertising on YouTube.

It broke away from the YouTube advertising campaign and launched its own Influencer program for famous content producers.

That promoted their brand and products a lot better than before.

READ NEXT: Is Surfshark Better For Netflix Than NordVPN? (3-Minute Read)

Why IS NordVPN Influencer Program So Popular For YouTubers

As you have noticed, many well-known content creators promote NordVpn. The reason for this is that is because NordVPN spends millions of dollars a year on advertising.

The Influencer program is one type of advertising plan for NordVPN.

Aside from getting paid a lot of money, the Influencer program is an excellent benefit for YouTubers.

The program provides a dedicated account manager who assists with setup and includes advice on how to improve their content.

They also become a member of a community where other influencers help each other promote their channels.

These influencers promote each other’s channels by directing their own viewers to their YouTube channels.

Additionally, these content providers that join the influencer program may work freely without fear of losing money since they will always advertise the VPN service products.

Being paid by NordVPN means they no longer have to worry about demonetization.

What Is A VPN?

VPN services, above all, provide private and encrypted connections. This allows you to safely surf the web in an internet café or hide what you browse from your ISP provider.

Some people even use VPN to binge-watch series on Netflix from other countries due to the VPN service allowing you to choose a country server to mask your location.

Should You Buy The VPN Recommended By YouTubers?

Even though many of these YouTubers recommend different  VPN services, you should never take their recommendation at face value.

Instead, I recommend it would be in your best interest to research the product and find alternatives that measure better or are close to the product. Also, you must decide if it would be beneficial to your needs.

How do YouTubers get Into Partner Programs?

Most people believe you have to be a famous YouTuber to join a partner program, but they are mistaken.

Grapevine is looking for someone to evaluate and promote other firms’ products on your YouTube channel.

You may also join the YouTube Partner Program if you have 4,000 hours of views in the last 12 months and 1,000 subscribers. In addition, if your channel becomes popular, certain firms will approach you to invite you to participate in their programs.

As you can see, creating content is not an easy profession, but those who can sell products for corporations like NordVPN are able to endure demonetization.

As a result, YouTube creators can keep doing what they love, which is providing you with entertainment.